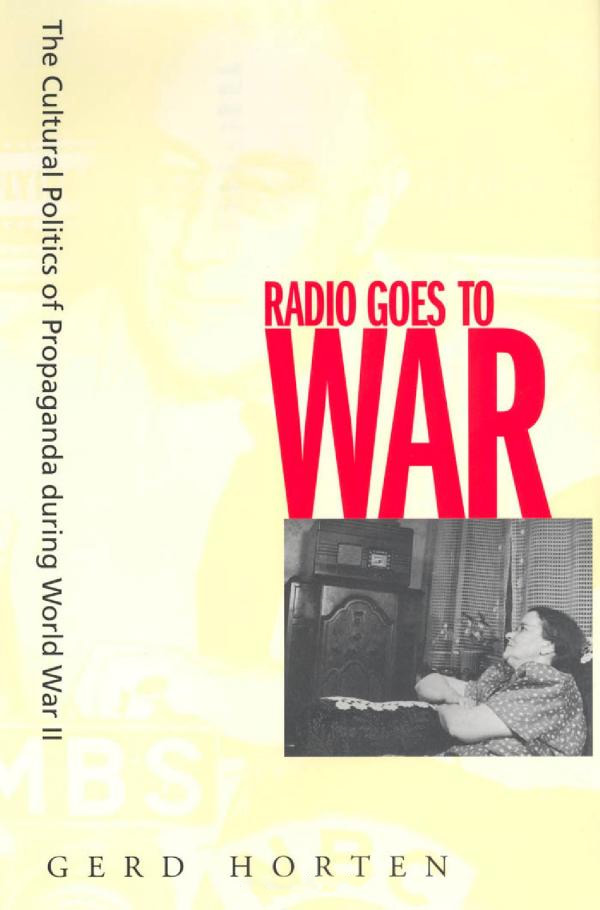 Radio Goes to War
The Cultural Politics of Propaganda during World War II
Gerd Horten
Kindle Hardcover Paperback
This book review appeared in the Summer 2003 issue of The Independent Review.

When Salon revealed that federal officials had been bribing TV networks to slip drug war messages into their prime-time shows, a public outcry followed—as well it should have. But that episode was nothing compared to the government’s organized effort to influence radio programming during World War II. Washington not only censored dissident voices and produced its own propaganda programs, but also created a master schedule, dubbed the National Allocation Plan, for advancing its messages in radio comedies, soap operas, and other series. The aim was not only to get the shows behind such wartime measures as gas rationing and scrap drives—something many programmers were happy to do on their own—but also to coordinate this public-relations effort for fear that overzealous broadcasters might deaden the public’s receptiveness to the government’s messages. The result, Gerd Horten writes in Radio Goes to War, “was simple and yet effective, in essence asking government agencies to provide every national advertiser with a definitive schedule of war messages to be covered. The schedule was to be presented well ahead of time, and it would then be up to a program’s writer or producer to incorporate the government message in the most effective manner” (p. 124).

Horten’s slim but rich study of broadcasting in the United States during World War II is a welcome addition to the literatures on radio, propaganda, advertising, and the war. It is a juggling act as well, at times a conventional historical account and at times something closer to cultural studies. It is an impressive performance, and only at the end does Horten drop one of the juggling pins to the floor.

The U.S. government entered World War II aware that Americans had grown wary of heavy-handed propaganda. If it wanted to keep the public dedicated to the war effort—and to fend off rival views of how the battle should be fought, in particular the notion that the United States should wage a strictly defensive war—it could not simply reprise the techniques it had used in World War I. (This difficulty pertained more to the European war than to the war in the Pacific, where, as Horten notes, popular racism toward the Japanese made it easier to engage in cruder forms of incitement.) At the same time, the feds now had much more practice at propaganda thanks to the New Deal: throughout the 1930s, “[t]hrough newsreels, documentary films, theater, murals, and radio, the state was reaching out to the American people” (p. 21). The National Recovery Administration had produced massive amounts of radio programming before the agency was ruled unconstitutional, paving the way for such subsequent innovations as Franklin Roosevelt’s famous fireside chats. Nor was the government the only institution broadcasting its point of view: anti-Roosevelt material, much of it sponsored by the National Association of Manufacturers, was also widely aired.

If Washington now had a larger propaganda apparatus at its disposal than in the past, it was also aware that it needed more than brute force to make its case. Therefore, the state did not confine itself to creating its own programs; it also engaged in less-public forms of audience manipulation, such as the aforementioned National Allocation Plan. It took a similarly sophisticated approach to censorship: although the administration directly barred some broadcasters from the air, it used some subtler tools as well, from the possibility that a license might not be renewed to the chance that a radio star might be drafted.

The government also hired pollsters to do audience research, which not only allowed it to hone its approach but left a treasure trove of primary material for Horten to examine. One of his discoveries is that audiences then could be as skeptical toward official pronouncements as they are today. “Before the war,” he writes, “most researchers had firmly upheld the [theory] that media messages directly and instantaneously produced a predictable change in personal opinion and behavior among the recipients.” Yet wartime data showed that “the government was definitely dealing with audiences that constantly negotiated, reread, or actively resisted their messages” (pp. 63–64), a revelation that foreshadowed modern reception theory and threw previous assumptions into doubt. Audience autonomy was an even bigger obstacle when it came to domestic foreign-language stations, where it was more difficult to keep close tabs on what was being broadcast. Thus, although the government hired German and Italian émigrés to do propaganda broadcasts (including the amusingly titled German-American Loyalty Hour), the programmers’ relatively radical or bohemian tendencies did not always sit well with listeners, even when they did not object to the criticisms of Hitler and Mussolini.

Meanwhile, private advertisers were aligning themselves with the propaganda effort, transforming the political economy of broadcasting in the process. Ad-saturated network stations already dominated the radio dial, thanks to a series of regulatory decisions that had favored them at the expense of noncommercial outlets with distinct points of view. (That process began under Calvin Coolidge but culminated in FDR’s first term, with the Communications Act of 1934.) But advertisers still had faced opposition from Washington, particularly in the second, more radical phase of the New Deal. The war softened that relationship, and, indeed, it ended up providing a substantial subsidy to the ad industry. The tax code adopted in 1942 “instituted an excess profits tax of 80 percent but also allowed companies to write off up to 80 percent of their advertising costs by including them in their overall expenses,” Horten notes. “The only condition was that the advertising help the war effort” (p. 93). Sometimes this help meant including useful information, such as how to conserve consumer goods. Sometimes the connection was more of a stretch, as when a radio spot billed enriched white bread, allegedly the product of “two years of cooperative work between the United States government and the baking industry,” as “one of the greatest forward steps ever taken in the nation’s interest” (p. 97).

With war propaganda embedded in ads and advertisements embedded in war propaganda—and both embedded in listeners’ favorite programs—domestic public relations began to take a new turn. Horten writes sensitively about the interplay between different genres of programming and about the officially sponsored messages they now incorporated. Nor does he neglect the times when programs managed to undermine the official messages. (The womanpower campaign, represented in popular memory by Rosie the Riveter, had to contend with ridicule in the evening comedies and with subtler, but also more thoroughgoing disparagement in the daytime soaps.) The result is an excellent and multifaceted study that breaks new ground in radio history.

The book’s epilogue, unfortunately, moves into new territory, plunging suddenly into the much larger topic of America’s “privatized” postwar culture. In this book, the meaning of privatization is shaky; it seems to refer more to the private sphere than to the private sector, though at times even that distinction gets blurred.

Horten argues that America after the war was less hostile to big business than before it, a nondisputable point. He argues that its vision of the good life was driven more by consumption, which is arguably true, though one could as easily claim that Americans in the 1930s were no less interested in consumption, but they simply had less to spend. He argues that public-sphere institutions such as “the factory floor, urban inner-city neighborhoods, labor unions, ethnic lodges, public meeting places, day care centers, and public transportation” (p. 180, quoting historian George Lipsitz) retrenched, which seems accurate in some cases but is much more debatable in others. He carries the argument further, but I won’t go on: my point is that in Horten’s hands the word privatization seems more to invite analysis than to further it.

To be sure, the postwar corporate state had a very different cultural character than its prewar counterpart: more suburban, more consumerist, and more immune to competing ideologies at home. It is difficult, though, to fit this transformation into neat categories of a public sphere and a private one—the boundaries between the two have always been porous, and the growing influence of the mass media eroded them still further. Horten does note that in the 1950s “television tried to mask its ... leveling of the public-private boundaries,” preferring to frame togetherness “as family cohesion around the TV set” (p. 182). This point is intriguing, but he leaves it undeveloped.

Why does Horten conclude an otherwise well-focused study with a broad new topic that he lacks adequate room to explore? Because one of the themes of the book is that this cultural shift, however you choose to define it, began during World War II, not afterward, and that it can be seen in the wartime alignment of private advertising and public propaganda. It is a substantial and defensible point, and I am glad he makes it, but I wish he had left it at that, reserving the larger social speculations for his next book.