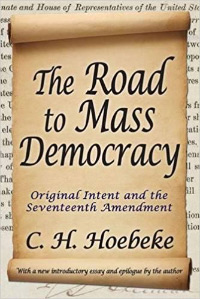 The Road to Mass Democracy
Original Intent and the Seventeenth Amendment
C. H. Hoebeke
Kindle Hardcover Paperback
This book review appeared in the Winter 1996/97 issue of The Independent Review.

The Constitution of 1787 provided for the appointment of United States senators by state legislatures. In 1913, the Seventeenth Amendment was ratified, installing the current regime of direct election of U.S. senators.

The bloated and special-interest-driven nature of the federal government during this century has led scholars in recent years to reexamine the original framework of the Senate and to consider the causes of the Seventeenth Amendment and its consequences for U.S. twentieth-century politics and society. C. H. Hoebeke’s The Road to Mass Democracy is an important addition to this growing literature.

According to Hoebeke, the Senate was explicitly modeled after the British House of Lords. It was intended to be an upper-class, conservative body that would check the populism of the democratic House of Representatives. State legislatures would serve as intermediaries identifying and elevating to the Senate the “best men,” marked by ability, virtue, and achievement. The Senate would be a “natural” aristocracy, “an agency which would fulfill a function similar to that of the [House of] Lords in checking the runaway tendencies of popular rule, but which at the same time would remain a non-hereditary body” (p. 45).

Hoebeke argues that the idea of using state legislatures as the instrument to create an anti-democratic and conservative body was flawed from the outset. After all, the Constitution itself was a reaction to the democratic excesses of the states and their governments during the period of the Articles of Confederation. The notion that those same state legislatures would appoint senators who would buck a popular tide was absurd. As he demonstrates, even after the adoption of the Constitution the state governments remained far more receptive than the national government to populist reforms.

Despite these flaws, appointment of senators by state legislatures was one of the least controversial elements of the new Constitution. Popular election of senators was proposed at the Constitutional Convention but received almost no support. Beginning after the Civil War, however, and escalating through the late nineteenth century, proposals for direct election became increasingly frequent, until the Seventeenth Amendment was finally adopted.

Traditional explanations for the passage of the Seventeenth Amendment can be divided into two categories: “internal” and “external” (Todd J. Zywicki, “Senators and Special Interests: A Public Choice Analysis of the Seventeenth Amendment,” Oregon Law Review 73 [Winter 1994]: 1007). Neither explanation, however, fully explains the genesis of the amendment.

Internal theorists see the Seventeenth Amendment as a response to the perceived evils of the original method of electing senators, which over time was alleged to have become marked by corruption and gridlock. In some instances the battles in the state legislatures became so charged that no senator was elected at all, resulting in a vacancy in that seat. As Hoebeke notes, these internal explanations overstate the problems with the original system, as most elections were uneventful. Internal models also provide no explanation for the belief that direct election would eliminate corruption and the influence of money in the electoral process. History has shown that direct election increased reliance on political machines to organize voters and increased the importance of raising money to run statewide popular campaigns. Moreover, less intrusive remedies for perceived problems were available, such as repeal of a federal law requiring election of senators by majority vote of the state legislature, rather than by plurality.

External theorists see the Seventeenth Amendment as a footnote to history, a small part of the larger democratizing influence of the Progressive movement. Traditionally, most exponents of external theories have seen increasing democracy as a positive development, as the Seventeenth Amendment supposedly would remove control of the Senate from the smoke-filled back rooms of political manipulators and machines, replacing this corrupt regime with the beneficent sovereignty of “the people.” Hoebeke is an externalist, as he sees the genesis of the Seventeenth Amendment in an ideological commitment to democratic principles and ideals, and especially in Rousseau’s concept of the “general will.” Unlike the Progressives, however, Hoebeke views this commitment to democracy as misplaced and as having consequences unforeseen by proponents of direct election.

For both Hoebeke and the Progressives, direct election of U.S. senators was to be the leading edge of a movement to bring to the federal government the democratic changes occurring on the state level, such as recall, referendum, and judicial elections. But nothing of the sort ever happened. There is no national recall, referendum, or election of federal judges; just direct election of senators. Moreover, the evolution of the electoral college into a democratic institution suggests an alternative evolutionary model for the Senate. In fact, by 1913 most states had adopted mechanisms to allow the people to vote directly for senators, thereby seemingly obviating the need for a constitutional amendment. Thus, the external explanations proffered by Hoebeke and the Progressives are incomplete.

Perhaps a more fundamental problem with Hoebeke’s thesis is his premise that the primary purpose of indirect election by state legislatures was to create an American House of Lords. Emphasizing the aristocratic nature of the Senate causes Hoebeke to minimize the role of the Senate in the structure of the Constitution. In the original Constitution, the Senate was an essential element of both federalism and bicameralism. Hoebeke recognizes these structural features but discounts their importance. In doing so, he ignores a critical element in the story of the Seventeenth Amendment.

Jay S. Bybee (“Ulysses at the Mast: Democracy, Federalism and the Sirens’ Song of the Seventeenth Amendment,” Northwestern University Law Review 91 [Forthcoming, Winter 1997]) argues that the primary purpose of having state legislatures elect senators was to give the states a constituent part in the federal government, thereby appeasing the anti-federalists, protecting the states from federal encroachment, and creating and preserving the structure of federalism. Senators were seen as, and acted as, the states’ “ambassadors” to the federal government, representing the states and their interests.

The Senate was also an important part of the bicameral legislature. The ability of factions or special interests to capture control of the federal government was mitigated by requiring bills to receive the approval of the public, speaking through their representatives in the House, and the approval of the state legislatures, speaking through their representatives in the Senate. The transition to direct election made the constituencies represented in the House and Senate more similar, thereby facilitating creation of logrolling agreements across the two houses of the national legislature. Moreover, it made the procurement of special-interest legislation easier by allowing special interests to lobby the Senate directly, rather than having to proceed through the intermediaries of the state legislatures. In an era of increasing interstate commerce, accompanied by the development of groups whose interests crossed state lines, these “economies of scale” in lobbying were critical. Direct election thereby weakened the protections of bicameralism and made special-interest legislation easier to obtain (Zywicki, pp. 1039–47).

In preserving federalism and bicameralism, the Senate did an extraordinary job before 1913. Throughout the nineteenth century, the federal government remained small and special-interest legislation was limited. The activity of the federal government was largely confined to the provision of “public goods” such as defense and international relations (Robert Higgs, Crisis and Leviathan: Critical Episodes in the Growth of American Government. New York: Oxford University Press, 1987, p. 114). Although the federal government grew during national crises such as war, the passing of the crisis brought a return to a small federal government (Roger E. Meiners, “Economic Considerations in History: Theory and the Little Practice,” in Economic Imperialism, edited by G. Radnitzky and P. Bernholz. New York: Paragon House Publishers, 1987, p. 95). The so-called “ratchet effect” of federal intervention persisting after the dissipation of the crisis that spawned it was scarcely evident in American history before World War I (Higgs, p. 30). The role of the Senate in thwarting special-interest activity on the national level and protecting the autonomy of the states was critical in preserving this arrangement.

The Seventeenth Amendment was not just a rebellion of “the people” against an inherently aristocratic institution, as Hoebeke suggests. It was primarily a rebellion of emerging special interests against federalism and bicameralism, which restrained the ability of the federal government to produce legislation favorable to those interests. Changing the method of electing senators changed the rules of the game for seeking favorable legislation from the federal government, fostering the massive expansion of the federal government in the twentieth century. Even if Hoebeke has failed to tell the full story of the Seventeenth Amendment, however, he has made an important contribution to our understanding of the system of representative democracy established by the Constitution and the forces that shape its evolution.