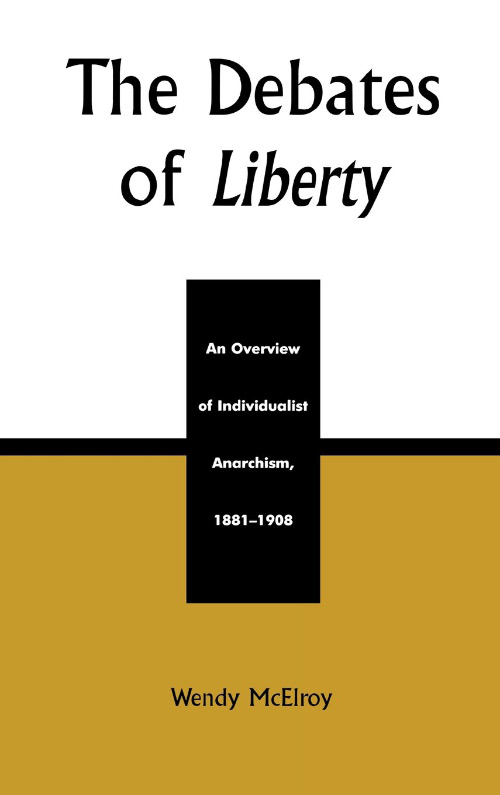 The Debates of Liberty
An Overview of Individualist Anarchism, 1881–1908
Wendy McElroy
Hardcover
This book review appeared in the Summer 2004 issue of The Independent Review.

Wendy McElroy’s new book is a valuable asset for those interested in learning more about the history of libertarianism. It presents an overview of the major discussions that took place in the nineteenth-century periodical Liberty. Edited by Benjamin R. Tucker from 1881 to 1908, Liberty contained contributions from a group of individualists often referred to as the Boston Anarchists. With clear summaries, quotations, and references, McElroy provides a synopsis for readers who do not have time to sift through the archives of Liberty. The book is well organized, with each chapter summarizing an area of debate: the state and politics, violence, natural rights, children’s rights, intellectual property, trial by jury, economics and money. By following these interesting debates, readers can see how libertarians refined and arrived at their positions. Particularly striking is how many ideas discussed by modern libertarians also appeared in the pages of Liberty.

Instead of taking the middle-of-the-road approach of the classical liberals, who believed the state is sometimes bad and sometimes good, the contributors to Liberty opposed the state in all its forms. The state is not a benevolent, albeit sometimes misguided institution. It is an institution of force and as such incapable of being reformed. To Tucker and his comrades, the political process and voting are nothing more than mechanisms for the tyranny of the majority. Thus, they considered attempts to work within its structure to be futile. If not through politics, though, how can change ever take place? They believed that education and persuasion are the keys.

Other anarchists advocated violence as a means of effecting change, but Tucker and other Liberty contributors believed violence should be considered and utilized only in rare circumstances. Regardless of the morality, trying to beat the state at its own game of force is highly questionable. McElroy does an excellent job juxtaposing the nonviolent Boston Anarchists with the contemporary violent Chicago Anarchists. The latter were communists and not anarchists in any libertarian sense: they advocated abolition of business and private property as well as of government. McElroy describes incidents in which the socialist anarchists had no qualms about using force against private citizens. Unfortunately for individualist anarchism, the public came to associate the concept of anarchy with violence and disorder. In response, they saw government as the solution. This mistake is regrettable because individualist anarchism is pro-order, pro-property, and antiviolence—but the state is antithetical to those ends. Anarchism would have rules, order, and private property, but not government law enforcement.

Government law enforcement has corrupted a number of legal procedures, including trial by jury. McElroy’s discussion of the Liberty view of jury trials is especially interesting. Many anarchists such as Lysander Spooner believed that randomly selected juries can help to provide protection against the state, but Tucker and others saw how the government can easily co-opt a jury trial. Because the state controls the entire process, we must consider the likelihood that it manipulates the system. Rather than acting as a bulwark for liberty, the judicial system is unfortunately nothing more than another arm of Leviathan. Insofar as the government can exclude certain types of people from juries, it provides few of the safeguards Spooner sought. As McElroy points out, “Only those who agreed with both the law and the penalties being applied could serve as jurors” (p. 109). Why do twelve people selected by government have a right to decide someone’s fate? Tucker and others considered juries as nothing more than “an expression of ‘thug’ tyranny, or majority rule.” McElroy inquires, “Perhaps the most basic question regarding trial by jury was: how can a government or any collective entity claim the right to adjudicate the case of an individual if that person does not first delegate that right?” (p. 111). Government creates, enforces, and judges the laws, so it should be no surprise that courts are set up to rule as the government wants. Modern classical liberals would do well to familiarize themselves with these realities. Given the dangers of the government’s courts of law, the anarchists are the realists, and the classical liberals the utopians.

Other chapters cover issues still debated by libertarians and classical liberals today. One hundred years ago little consensus existed on the legitimacy of intellectual property. Spooner favored intellectual property laws, James L. Walter opposed them, and others such as Tucker took an intermediate position that copyrights are legitimate only if created by contract. Contributors also debated why we should have freedom from the state. Whereas advocates of natural rights viewed liberty as more moral than other systems, egoists such as Tucker believed that liberty would enable people to pursue their self-interest more successfully. Modern libertarians still debate these issues. The egoists were essentially advocating an economic theory of property rights, believing that the market would enable all people to be better off. Like Murray Rothbard, I am puzzled as to how government officials might be convinced that they would be better off under libertarianism. Moving from our current world to libertarianism is unlikely to be a “Pareto improvement” for all parties involved, so the consequentialist needs to have a social aggregate of well-being to judge different states of the world. Authors such as Tucker and Ludwig von Mises never make that aggregate clear.

Although the book is nearly flawless, McElroy’s feminism occasionally detracts from the main purpose of the text. Statements such as “[Miss Kelly] was keenly aware that differences in the wages offered to men and to women lay at the root of the killing poverty engulfing her patients, and forcing many into prostitution” (pp. 56–57) are not fully explained. Does McElroy mean that Miss Kelly was keenly aware that differences in productivity lead to differences in wages? In the chapter on children’s rights, McElroy appears disappointed that the debate about children took place between men and seems to imply that libertarian political philosophy can also answer questions about personal ethics, such as how one should rear a family. In most of the book, however, she simply presents the arguments in Liberty and allows readers to draw their own conclusions.

Modern readers may consider the nineteenth-century anarchists’ views on economic theory to be somewhat flawed. Because these authors lacked an education in marginal-utility theory, their economic theories are understandably quite primitive. In fact, Rothbard did not refer to himself as an individualist anarchist because of his profound difference with their economic views (Murray Rothbard, “The Spooner-Tucker Doctrine: An Economists View,” in Egalitarianism as a Revolt Against Nature [Auburn, Ala.: Ludwig von Mises Institute, 2000]). The individualist anarchists believed in a labor theory of value, opposing profits and even corporations. In the end, however, they still had a strong commitment to contracts and, as McElroy points out, could not be classified as socialist in any modern sense of the word (p. 147). They recognized that the state is not needed for money and presented a number of arguments that have been advanced since then by modern “free bankers,” such as Tyler Cowen, Randall Krozner, Rothbard, George Selgin, and Larry White.

McElroy’s Debates is an excellent book for anyone who wants to learn about the genesis of the libertarian position. A number of the nineteenth-century anarchists’ ideas quite clearly have been incorporated into modern libertarianism by authors such as Rothbard. Issues discussed in Liberty remain as relevant today as ever. The nineteenth-century anarchists saw the state’s encroachment and recognized government law enforcement as no protector of rights. One hundred years after the U.S. Constitution was ratified, the Boston Anarchists recognized that the experiment with limited government was a failure. At its root, government is inherently coercive and antiliberty. Those who favor freedom need to work for a complete alternative to political government. The Boston Anarchists provided a good start.