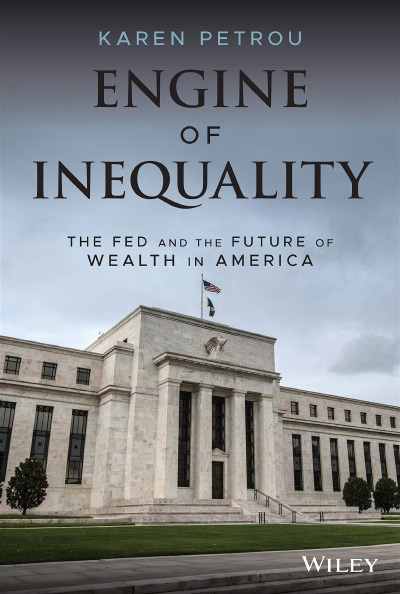 Engine of Inequality
The Fed and the Future of Wealth in America
By Karen Petrou
Kindle Hardcover Audiobook Audio CD
This book review is a web exclusive for the Winter 2021/22 issue of The Independent Review.

In the Engine of Inequality, Karen Petrou argues that inequality is a fundamental problem threatening life expectancy and political polarization and exposes our nation to financial risk, especially during economic downturns. This, she argues, justifies the Fed addressing inequality as an additional mandate, mainly since other legislative fixes either will never materialize or will take too long to implement.

The book has arguments I sympathize with, including the problems inherent with making central banking decisions based on aggregated data (p. 98) and the understanding that the 2008 Financial Crisis was caused and prolonged by the privatization of losses but the socialization of profits (p. 62). (See Russ Roberts, 2009, Gambling with Other People’s Money, Stanford, Calif.: Hoover Institution Press, for a better articulation of the moral hazard problem of bailouts during the Financial Crisis). It also comes to some policies I agree with, including the need to collect better microeconomic data (p. 180), the need for the Fed to credibly commit to not being a lender of first resort, and winding down the Fed’s balance sheet (p. 183).

I have, however, five major points of contention with the book.

First, the book doesn’t provide the specific practical nuts and bolts of how the Fed would execute a mandate to address inequality. For instance, how would the Fed’s inequality mandate tradeoff against other explicit and informal mandates it responds to? What metrics of inequality are the proper target for monetary authorities to utilize (consumption, wealth, income)? What is the natural level of inequality? Does the natural level stay constant or is there some natural corridor range? How will that natural level change as fiscal policies and demographics or immigration change? Should the natural level be calculated with or without government transfers? These are tough questions to answer. Maybe even impossible for a demographically and ideologically diverse society to agree upon.

Second, the book is fundamentally based on the academic literature finding a concerning spike in inequality, such as Thomas Piketty, 2003, “Income Inequality in the United States, 1913–1998,” Quarterly Journal of Economics 118(1): 1–39; and Emmanuel Saez, 2019, “Striking it Richer: The Evolution of Top Incomes in the United States.” Yet, this literature is far more contested than the book admits. For instance, important criticisms of Piketty and Saez, and their focus on income or wealth inequality, cast doubt on their interpretation of the historical and modern path of inequality in the United States. See, for example, Daron Acemoglu and James A. Robinson, 2015, “The Rise and Decline of General Laws of Capitalism,” Journal of Economic Perspectives 29(1): 3–28; Gerald Auten and David Splinter, 2019, “Top 1% Income Shares: Comparing Estimates Using Tax Data,” AEA Papers & Proceedings 109: 307–311; Gerald Auten and David Splinter, 2019, “Income Inequality in the United States: Using Tax Data to Measure Long-term Trends,” working paper; Vincent Geloso and Phillip W. Magness, 2020, “The Great Overestimation: Tax Data and Inequality Measurements in the United States, 1913–1943,” Economic Inquiry 58(2): 834–855; Wojciech Kopczuk, 2015, “What Do We Know about the Evolution of Top Wealth Shares in the United States?” Journal of Economic Perspectives 29(1): 47–66; Kopczuk and Zwick 2020; Wojciech Kopczuk and Eric Zwick, 2020, “Business Incomes at the Top,” Journal of Economic Perspectives 34(4): 27–51; Per Krusell and Anthony A. Smith Jr., 2014, “Is Piketty’s ‘Second Law of Capitalism’ Fundamental?” Journal of Political Economy 123(4): 725–748; G.P. Manish and Stephen C. Miller, 2021, Capitalism and Inequality, Routledge; Deirdre N. McCloskey, 2014, “Measured, Unmeasured, Mismeasured, and Unjustified Pessimism: A Review Essay of Thomas Piketty’s Capital in the Twenty-First Century,” Erasmus Journal for Philosophy and Economics 7(2): 73–115; and Alan Reynolds, 2006, Income and Wealth. Greenwood Press. Before calling for radically transforming our monetary institutions to address inequality, we should probably first sort out the trends in inequality.

My third point of contention with the book is related to the second. The book does not give a hearing to other factors driving inequality found in the literature. It posits the Fed as a primary institutional driver of inequality with very little evidence to convince academic scholars. Nor does the book address how Fed-driven inequality would measure up against other factors driving inequality, including longer life expectancies, an aging population, increases in college education, delayed marriage rates, and cronyism. Regulatory capture in the financial industry, for instance, may be a factor contributing to inequality (G.P. Manish and Colin O’Reilly, 2019, “Banking Regulation, Regulatory Capture and Inequality,” Public Choice 180: 145–164). The Fed certainly has a history of using its discretion to bias policy in favor of major financial institutions (Peter J. Boettke, Alexander William Salter, and Daniel J. Smith, 2021, Money and the Rule of Law: Generality and Predictability in Monetary Institutions, New York: Cambridge University Press) as Petrou points out. To the extent this is true, however, Petrou’s recommendations for a more interventionist Fed, by giving Fed authorities further discretionary wiggle room to pursue conflicting mandates, may increase inequality.

The fourth point of contention I have with the book is that it assumes that the Fed is the primary driver of low interest rates. While the Fed has at times engaged in easier monetary policy than it should have (John B. Taylor, 2009, Getting Off Track, Stanford, Calif.: Hoover Institution), the consensus among economists is that low-interest rates are being driven, around the world, by factors far beyond the control of central banks. These include demographics (Lukasz Rachel and Thomas D. Smith, 2017, “Are Low Real Interest Rates Here to Stay?” International Journal of Central Banking 50 (September): 1–42), increased savings (Robert E. Hall, Robert E., “Low Interest Rates: Causes and Consequences,” International Journal of Central Banking 50 (September): 103–117), and a move towards investing in safer assets (Charles Bean, Christian Broda, Takatoshi Ito, and Randall Kroszner, 2015, “Low for Long? Causes and Consequences of Persistently Low Interest Rates,” Geneva Reports on the World Economy, International Center for Monetary and Banking Studies 17).

My final contention with the book is that it makes a case for a policy of moderating interest rates rather than a binding rule that would create true generality and predictability in monetary policy and prevent discriminatory intervention. In this sense, the book has little appreciation for the role that prices play in a market society by conveying information and providing incentives (F. A. Hayek, 1945, “The Use of Knowledge in Society,” American Economic Review 35(4): 519–530) or the fact that pursuing goals beyond monetary stability risks monetary disequilibrium (Leland B. Yeager, 1997, The Fluttering Veil: Essays on Monetary Disequilibrium, Indianapolis: Liberty Fund).

The book also has moments of over-the-top sensationalizing and admitted anger that makes the book difficult to take academically seriously. It is also often short on details. For instance, “Equality Banks” are introduced as a solution (p. 168–170), but the reader is left with unanswered questions from the short discussion.