The Root Cause of Health Care Dysfunction: News: The Independent Institute

Largely absent from the vigorous debate over reforming the nation’s health care laws is the understanding that simply being covered by health insurance does not reduce health care costs.

Before the Affordable Care Act (ACA) passed in March 2010, President Obama repeatedly promised that the typical family’s health premiums would go down by (sometimes “up to” but frequently “on average”) $2,500. That decline did not occur because the ACA strengthened the control that insurance companies—as opposed to patients—have over health care spending. In fact, Americans’ increasing dependence on health insurance over the last seven decades has been a major contributor to exploding health costs.

It’s a fundamental economic truth that too much health insurance actually increases costs. That is why other types of insurance—think of car accidents or warehouse fires—only cover catastrophic costs. According to my new study published by the Mercatus Center, the full cost impact of our health insurance, provided by both government and private insurers, is staggering. 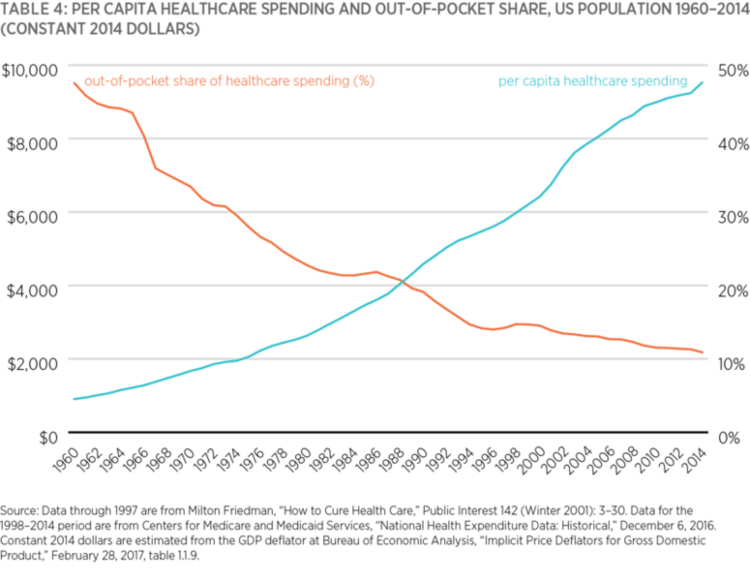 In 2014, real health spending per person was $9,532. However, if government policy had not encouraged control of health spending to shift from patients to governments and insurers, spending would have been about $4,316 per person—less than half of what we actually spend.

The difference is explained by waste, fraud, and abuse that quickly finds its way into markets controlled by third-party payers, who then impose costs to try to control these problems.

If a politician promised to reduce the cost of driving by forcing auto insurers to pay for our cars, gasoline, tires, engine oil, windshield-wiper fluid, and all the other items and services we need to be on the road, we would all understand why our premiums would skyrocket—because those added costs would have to be accounted for.

And that’s just the beginning. Since drivers would not pay for our cars directly, we wouldn’t be careful about how we managed their costs. We wouldn’t search for cheaper gas or efficient mechanics, or care whether a more expensive tire was really worth it. We’d go to Maserati dealers for their latest model without worrying about how to finance the purchase, and simply tell the salesperson which insurer to bill.

Obviously, auto insurers would respond the same way health insurers have: Build networks of dealers, gas stations, and mechanics; and impose all kinds of rules and bureaucracies between them and drivers. However, because insurers are removed from drivers’ experiences, those rules would be ineffective—just like they have proved in health care.

In 1999 and 2001, the Institute of Medicine at the National Academies of Science published two scathing reports on health quality. The first concluded that tens of thousands of patients died in hospitals unnecessarily.

The second recommended principles to guide the health system across the so-called “quality chasm.” It noted payment was an important factor in improving quality, and that “even among health professionals motivated to provide the best care possible, the structure of payment incentives may not facilitate the actions needed to systematically improve the quality of care, and may even prevent such actions.”

A decade later, the institute published an equally disturbing 825-page report on waste. Experts convened by the institute concluded that $765 billion (31 percent) of the $2.5 trillion spent on U.S. health care that year was wasted.

As recently as 1960, just under half of health spending was controlled directly by patients. Because the costs paid by insurers were mostly related to hospitalization; That meant many families that needed only primary care went for years without ever processing a claim through a health insurer. Nevertheless, they had access to doctors.

Today, only 11 percent of health spending is controlled directly by patients, but solutions are at hand. Among the privately insured, the dominance of third-party payers is the consequence of decades-old tax policy that allowed medical spending covered by insurers to be excluded from taxable income, while direct spending was taxable income. This was fixed somewhat through Health Savings Accounts, which came into being in 2005 and allows beneficiaries to spend pre-tax dollars directly on medical care. Similar mechanisms could be used in Medicare, Medicaid, and other government programs to reduce costs.

We need to do more than repeal and replace the ACA. We need to repeal insurers’ and governments’ control over our health spending and replace it with a payment system controlled directly by patients.

RELATED
Thomas Derangement Syndrome
Biden and Oil: Destroy America in Order to Save It
Economists Should Know Better than to Support Big Government Democratic Policies
The Pétain Presidency
The World Is Facing Its Day of Inflationary Reckoning
What Can Healthcare Prices Teach About Inflationary Woes?
Domestic Terrorism Ignored
Four Reasons Biden’s Student Loans ‘Forgiveness’ Plan is Wrong
What the January 6 Committee Might Have Been
The Pangloss Presidency: Despite evidence to the contrary, Americans now live in the best of all possible worlds.
A New and Needed Truth-Seeking University
Are Elon Musk and Jaime Dimon Crying Wolf about the Economy?