The Burden of Proof on Climate Change: News: The Independent Institute

The burden of proof for Anthropogenic Climate Change falls on alarmists. Climate Change (CC) has been ongoing for millions of years—long before humans existed on this planet.

Obviously, the causes were all of natural origin, and not anthropogenic.

There is no reason to believe that these natural causes have suddenly stopped; for example, volcanic eruptions, various types of solar influences, and (internal) atmosphere-ocean oscillations all continue today. (Note that these natural factors cannot be modeled precisely.)

Let’s call this the “Null Hypothesis.” Logically therefore, the burden of proof is on alarmists to demonstrate that the Null Hypothesis is not adequate to account for empirical climate data; alarmists must provide convincing observational evidence for Anthropogenic CC (ACC)—by detailed comparison of empirical data with GH models.

I am not aware of such proofs, only of anecdotal info—although I admit that ACC is plausible; after all, CO2 is a GH gas, and its level has been rising, mainly because of burning of fossil fuels.

However, ACC appears to be much smaller than predicted by GH models; there is even believed to be a period of no warming [“hiatus”] during the past 19 years—in spite of rapidly rising atmospheric CO2 levels [1]. 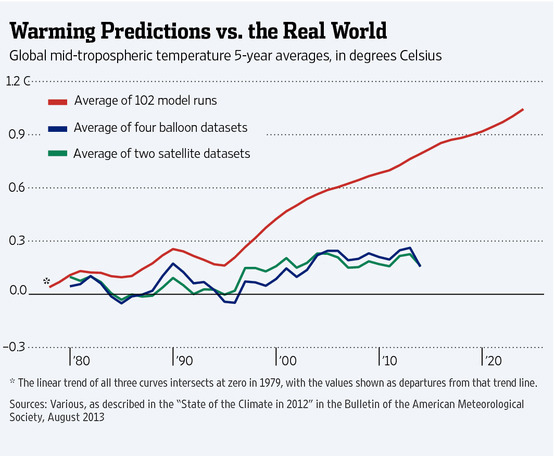 There seems to be no generally accepted explanation for this discrepancy. Yet as the gap grows, the five IPCC reports insist there is no gap—with ever greater claimed certainty; rising from 50% to 99%.

Even necessary conditions for empirical data (like temperature rise vs altitude and latitude; cloud cover; precipitation) are difficult to establish; any major disagreement with models disproves ACC.

IPCC’s GH models are not validated—and not policy-relevant

In other words, GH models have not been, and may never be validated; hence are not policy-relevant. They are scenario-generation machines that rest on assumptions and incomplete science—not on actual observations [2].

Anyway, warming appears to be trivially small, and most likely economically beneficial overall—as established through careful studies by leading economists.

I therefore regard the absence of any significant GH warming as settled, and policies to limit CO2 emissions as wasting resources needed for genuine societal problems—and even as counter-productive, since CO2 promotes plant growth and raises crop yields [3]

I am much more concerned about a cooling climate, as predicted by many solar scientists [4], with its adverse ecological effects and severe economic consequences for humanity.

Singer and Avery [5] have described the cyclical CC, seen during the past major glaciation; Loehle and Singer [6] see evidence for extension of the cycles into the current Holocene.

In particular, historical records [7] identify the recent cycle of a (beneficial) Medieval Warm Period and the (destructive) Little Ice Age (LIA) with its failed harvests, starvation, disease, and mass deaths.

I have therefore explored ways [8] to counter the (imminently expected) next cooling phase through low-cost and low-ecological-risk methods of a specific GH effect—not based on CO2.

At the same time, assuming that our scheme does not work, we need to prepare for adaptation [9] to a colder climate—with special attention to supply of food, and of sustainable water and energy.

The outlook appears promising—provided there is adequate preparation. However, the coming cold period will test the survivability of our technological civilization.

As surmised earlier [10], COP21 will likely turn out to be a “big nothing-burger,” but media will spin it as great Obama victory. US consumers will pay the bill and suffer higher energy prices and increasing poverty.

RELATED
The States that Are Falling Behind in Economic Freedom
Race Everywhere
Hulu’s 1619 Project Docuseries Peddles False History
Paul Volcker’s Recipe for Prosperity
Ownership, Control, and Reform: Market-Based Approaches to Universities
Concentrate Where the Murders Are Concentrated
Four Ways to Get What You Want
The Cost of San Francisco’s Reparations Proposal: Nearly $600,000 Per Household
What the Populists in Congress Get Right and Get Wrong
Debt Ceiling Kabuki: Republicans Will Cave and U.S. Government Finances Will Get Even Worse
Texas Conservatives Should Not Support Banning Land Sales to Foreigners
Reckless Reparations Reckoning