Obamacare Enrollments Slow to a Trickle: News: The Independent Institute

Only 102,000 people enrolled in Obamacare via the federally operated exchange during the week of December 27 – January 2, bringing the total to 6.5 million. This supports my previous expectation that Obamacare enrollment is petering out. 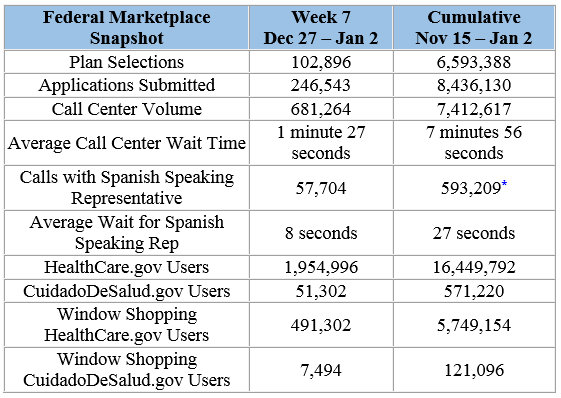 Charles Gaba at acasignups.net figures about two million are enrolled via state exchanges, bringing the total to just over 9 million.

However, “enrolled” does not mean that they paid their premiums. The federal Administration does not report this. However, as Mr. Gaba notes, Massachusetts reports that its current payment rate is 72 percent. If the same rate prevails nationwide, that would imply 6.5 million “really” enrolled.

Of course, premiums for most new enrollees are not due yet. Nevertheless, I struggle to see how Obamacare will hit its target. Mr. Gaba believes that there will be a rush in the first full week after New Year’s Day, and again when open season closes on February 15. We will see.

In April 2014, the Administration announced that 8.02 million people had enrolled, and the estimate by November 15 was 9.7 million. However, Only 8.5 million had paid premiums up to that date. Because of drop outs, the number of people paying premiums at the time was only 6.7 million.

RELATED
Conflicting Health Policy Visions in the Senate
The COVID/Crypto Connection: The Grim Saga of FTX and Sam Bankman-Fried
Why Do Progressives Support Democrats? Part One
Economic Essentials and Economic Errors
Health Reforms Both Parties Should Endorse