The National Climate Assessment (NCA) Doubles Down on Doom: News: The Independent Institute

President Barack Obama has decided to make “combating climate change” one of the top priorities of his second term; his EPA has pursued policies that amount to a “war on coal”—or more specifically on emissions of carbon–dioxide. On June 2, EPA announced a goal of a 30% reduction by 2030—focusing mainly on coal-fired powerplants that currently supply well over one-third of US electricity.

The proposed EPA rules would cost approximately $51 billion a year and destroy 224,000 jobs each year through 2030. The poor and people on fixed incomes will be hurt the most. And all this pain will be for absolutely no gain: It will have no impact at all on the global climate, according to reports published by the libertarian Heartland Institute—based on peer-reviewed climate science.

Apparently, Mr. Obama has become convinced that CO2 is responsible for Global Warming—and that anthropogenic GW (AGW) is dangerous. Or perhaps, there are more sinister motives.

Never mind the lack of evidence about any significant human influence on climate or the fact that the atmosphere is a “global commons”—with the US emitting only about one-tenth of all CO2, while China alone emits nearly one-half. [According to official reports released on May 14, China now burns 49% of the world’s supply of coal, the US only 11%.]

But since climate change is nearly all naturally caused, Obama should learn the lesson of King Canute, who supposedly commanded the tides to cease rising and falling.

Yet on May 4, the US Global Change Research Program (USGCRP) issued its third National Climate Assessment (NCA), a collection of imagined future climate catastrophes and disasters for every section of the country. Its purpose is to convince the public that only quick action to cut emissions of carbon dioxide could avert these horrible events. The handsome report comes with beautiful pictures and graphs in color, a total of 841 pages. It was expensive, too; representing four years of work by hundreds; but it sank quickly, like a lead balloon. Consequently, the media, with much help from the White House Office of Science and Technology, have done everything possible to keep the excitement going.

Yet daily we read of new discoveries, generally on the front page of the New York Times, which portend some awful calamity: killer heat waves, more droughts and floods, more hurricanes and tornadoes, looming losses of agriculture in poor countries, raising fears of famines and millions of environmental refugees, collapse of Antarctic ice sheets and rise of sea levels flooding coastal cities, etc—scenarios dreamt up in Hollywood.

The NCA report ambles on about rising rates of heat waves, droughts, floods, severe weather, hurricanes, etc. But there is no evidence whatsoevere to support such claims; the official statistics show no such increase in the rates; there is no recent acceleration in the steady rise of sea level, which has been ongoing since the last ice age—a 400-foot rise in the past 18,000 years.

A group of retired military brass has rediscovered what they call “strategic climate change.” It is an old fable that started out a few years ago, claiming global warming would enhance conflict over resources throughout the world and create even more environmental refugees, 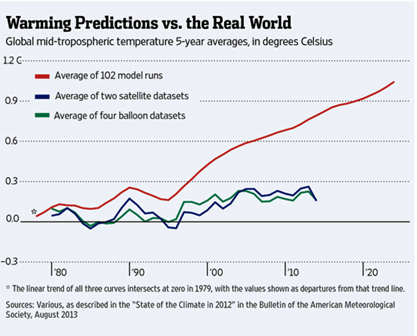 During the same 15-year period, the UN-created IPCC has issued three Assessment Reports [in 2001, 2007, and 2013]. Hilariously, their politically-oriented Summaries claim increasing certainty [66%, 90%, and even greater than 95%, respectively] for AGW, based on supposed agreement between models and actual data. LOL!

As documented by the independent NIPCC [2013], the discrepancy between what climate models calculate and what the actual observations tell us is striking. Yet all speculation about future climate is based on these models, which obviously have never been validated.

But let me congratulate the USGCRP for not falling into the same trap as in their first report [2000], initiated by then-vice president Al Gore. In order to enhance the scariness of future impacts on different regions of the United States (they chose 18 regions), the report authors selected two climate models that had particularly high "climate sensitivity" and would give more temperature rise for the same increase of carbon-dioxide level

Unfortunately for the (Gore) NCA, the two models gave opposite results for most of the 18 regions. For example, one model would predict that North Dakota would turn into a swamp, while the other predicted that it would turn into a desert. Altogether, about half the results were in opposite directions (See figure below, which was also shown in the initial overview report of the NIPCC in 2008, available at www.NIPCCreport.org ] 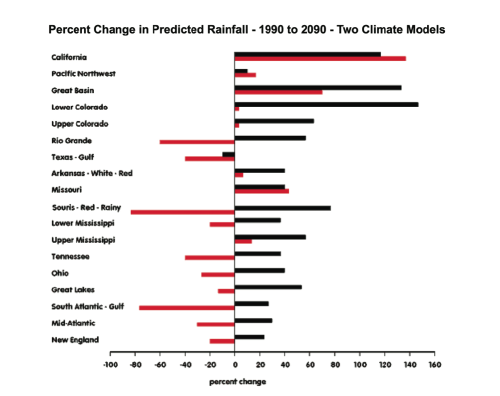 NIPCC can also be read as “Not-IPCC.” And indeed, its conclusions disagree starkly with those of the IPCC. Both groups of climate scientists use the same procedure in summarizing the published literature—except that NIPCC includes papers which the IPCC ignores since they disagree with the pre-conceived AGW story; these papers also suggest possible natural causes for observed climate changes, such as solar variability and internal oscillations of the atmosphere–ocean system.

On reflection, this third NCA report is probably the worst of all. It represents a full press effort by the White House to scare the public into accepting higher prices for fossil fuels. It goes hand in hand with the effort of the OMB (Office of Management and Budget) to assign a high “social cost” to carbon-based fuels in their so-called SCC (Social Cost of Carbon) calculations. Unfortunately for OMB, the social “cost" of carbon is almost certainly negative: that is, more CO2 is good for us because it benefits agriculture. But the SCC calculations don’t include the benefits of increased CO2. One can learn about these by reading Volume 2 of NIPCC’s “Climate Change Reconsidered-II,” published in April 2014.

The reaction to NCA was not slow in coming. The NCA is more alarming than even the latest IPCC report published in 2013. For example the sea level predictions are about double those of IPCC 2013. Further, the IPCC does not foresee a rise in severe weather, floods, or droughts, based on historical data that show no significant trend with rising temperature. Even the alarmist US National Academy of Sciences has taken a cool stance towards the NCA.

A direct rebuttal of the NCA is provided by an independent group of 15 scientists. It has been picked up by several media outlets—but of course not by the New York Times or Washington Post. I quote from their rebuttal:

“Unilateral CO2 emission control by the United States promises to damage the economy of the United States without any benefits. In fact, increasing CO2 in the atmosphere facilitates achieving the goal of raising the poor out of poverty through increasing food production.”

What of the future?

Sometime this summer, the Supreme Court of the United States (SCOTUS) will issue its decision in South-Eastern Legal Foundation vs. EPA, an important case having to do with whether the EPA’s Endangerment Finding (EF) on CO2 should be upheld. Much is at stake here. SCOTUS can stop the EPA drive to remove plentiful, cheap coal, which the US exports to other nations, and which until recently has provided over half of US electricity. Coal will either remain a preferred fuel or will be replaced and raise the cost of electric generation.

If SCOTUS cannot stop the EPA, perhaps a change in the Senate in the November elections will do the trick. It will certainly put both House and Senate in support of low-cost energy and benefit economic growth and jobs. It would of course go counter to the campaign promise of Barack Obama that “electricity prices would skyrocket”.

Why would the White House want to make energy more costly for Americans? I don’t really think that they believe in limiting CO2 emission as a way to stop the climate from warming—if indeed CO2 is as effective as the NCA thinks.

I quote here from a letter submitted to OMB [on SCC]:

“Artificially raising the price of energy is the same thing as impoverishing the American People. It is shocking and disgusting that our government would intentionally pursue this goal, particularly without any scientific basis whatsoever.”

“The currently calculated SCC estimates [by OMB] are being used to justify proposed EPA regulations, and also as input regarding a proper carbon tax levels should a future Congress elect to move in this Direction... and these SCC estimates are for the entire world not just for the US. It matters a great deal what other key countries are to do in these regards...And, in short, the current SCC estimates are not only worthless, they are extremely dangerous... to US energy, economic and national security related policy.”

Why would the White House want to make energy more expensive and depress the standard of living for most of the US population? The problem becomes very acute for those in the lower income brackets where they have to decide between food and heat; whether to starve, or to freeze. Of course, they won’t be permitted to starve or freeze; they will now receive energy vouchers in addition to food stamps. These subsidies will have to be paid for by taxes—mainly from middle-income earners; they are the ones who will lose out in this scenario.

S. Fred Singer (1924–2020) was a Research Fellow at the Independent Institute and Professor Emeritus of Environmental Sciences at the University of Virginia.
Climate ChangeEnergyEnergy and the EnvironmentEnvironmental Law and RegulationScience and Public Policy

RELATED
There Are 8 Billion People. We Should Celebrate Superabundance, Not Lament ‘Overpopulation’
Where Is the Free Market Utopia?
On Gas Prices, Simple Economics Trumps Biden’s Partisan Agenda
Brazilians Try to Decide Which Is the Lesser Evil
Colleges: Go Back to Basics
The Fed’s Mission Creep Has Turned Its Monetary Policy into a Failed Mission
The Bicycle Lobby Goes Back to the Federal Trough
Is This the End of the U.S.-Saudi Partnership?
The PayPal Fiasco Was No Accident
Will Biden’s Support for the Iran Protests Backfire?
Gov. Newsom Is Right to Oppose Proposition 30, A Destructive Tax Increase
America’s Expensive Gamble On Electrical Vehicles Won’t Move The Climate Needle