The medical-device industry’s primary lobbying goal this year is to repeal Obamacare’s 2.3 percent excise tax on medical devices. Device makers have been collecting and remitting this new tax since the beginning of 2013. The industry’s largest trade association has published a list of studies, from 2011 and 2012, which anticipated that the tax would result in significant harm to research and development, as well as employment in the industry. Now that we are in the second half of 2013, we can inquire whether the early evidence confirms these predictions. Preliminary research on the financial results for the first half of the year suggests that the excise tax is causing significant harm.

One of the reasons that it has been difficult to repeal the tax is that its dwindling band of supporters have asserted that the medical-device industry will earn a windfall of revenues once Obamacare’s “benefits” kick in. That is, once over thirty million newly insured people start lining up for medical care, device makers’ sales will rise in response. There are a couple of flaws in this argument.

First, items like stents and artificial joints are disproportionately used by Medicare patients, because they address consequences of aging. That’s not to say that there will be no increase in demand from the newly insured, but only that those in greatest need of big ticket medical devices are already insured.

Second, Obamacare and other influences in the health care system put the squeeze on medical-device makers by increasing the power of hospitals. Hospitals are merging and consolidating into larger systems. Research (such as two recent studies by The Center for Studying Heath System Change and the Robert Wood Johnson Foundation) generally concludes that this market power results in higher fees charged to patients and insurers. Surely, consolidation also gives hospitals market power over their suppliers, as well as their customers.

Even if it is true that device makers are going to earn a windfall from Obamacare, the increased revenue will not be realized until 2014, when Obamacare’s benefits finally roll out. So, 2013 alone should certainly be all pain and no gain—an annus horribilus—for the medical-device industry in the U.S.

One question that has not been well addressed by previous research is how the cost of the device tax will be divided among the affected parties. This is because we do not have good estimates of the relevant price elasticities. At one extreme, the device makers could pass the entire tax onto hospitals, which continue to buy the same quantity of medical devices.

This is unlikely. If it were, hospitals, rather than device makers, would be more heavily invested in repealing the tax. (Instead, hospitals and their purchasing agents have launched a public affairs campaign to shame device makers who add the excise tax as a separate line item on their invoices.)

At the other extreme, hospitals could threaten to cut back their purchases of devices if the tax were passed through at all. Device makers would then have to decide whether to absorb the entire tax or pass it on and suffer reduced sales. Either choice would result in reduction of supply at the margin. The actual outcome must be somewhere between these extremes.

In a new research note, I calculate a preliminary estimate of the tax’s effect on U.S. sales of medical devices. The sample is the ten largest publicly traded firms in the S&P Health Care Equipment Select Index (which is replicated for investors in the SPDR S&P Health Care Equipment Index ETF [NYSE: XHE]. I estimate the effect of the tax by analyzing net U.S. sales and net international sales for the first half of 2013 and 2012. For three of the firms (Thermo Fisher [NYSE: TMO], Boston Scientific BSX +0.57% [NYSE: BSX], and Zimmer [NYSE: ZMH]), U.S. sales were not clearly segmented from international sales. One firm, Waters WAT -6.01% [NYSE: WAT], makes lab equipment and does not appear to have any products subject to the tax. Excluding these firms leaves six in the sample.

These six firms (Medtronic MDT +0.42% [NYSE: MDT], Covidien COV +1.07% [NYSE: COV], Stryker [NYSE: SYK], St. Jude Medical [NYSE: STJ], Intuitive Surgical [NASDAQ: ISRG], and CareFusion [NYSE: CFN]) paid an estimated $117 million in excise taxes in the first half of 2013. Three trade associations for the industry have reported that their members remitted one billion dollars of excise tax in the first half of 2013. So, we can conclude that the firms in this sample account for about twelve percent of affected sales. The sample is limited by the absence of conglomerates with medical-device divisions, especially Johnson & Johnson [NYSE: JNJ], General Electric [NYSE: GE], and Siemens [NYSE: SI]. However, it was not possible to extract the relevant sector-specific or country-specific figures from their financial statements. 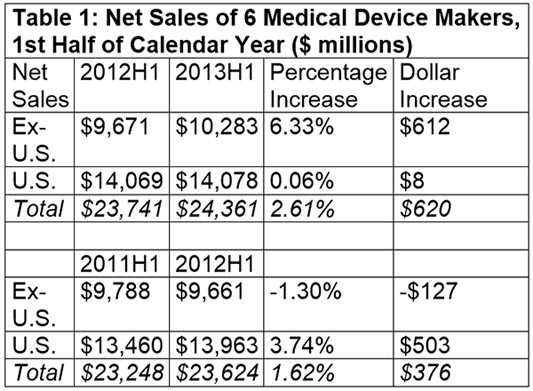 For these six major companies, U.S. sales in the first half of 2013 were essentially unchanged over the first half of 2012, at just over $14 billion. Internationally, however, sales grew 6.33 percent, from $9.7 billion to $10.3 billion. It is highly unlikely that differences in macroeconomic performance explain the dramatic difference: The International Monetary Fund (IMF) estimates that U.S. growth in 2013 will be 1.7 percent, versus just 1.2 percent for all developed economies (which account for over two thirds of the global medical device market).

The only major factor that changed between U.S. and international medical-device markets in 2013 is the excise tax. The tax must, therefore, explain much of the U.S. lag. By way of comparison, U.S. sales in the first half of 2012 rose 3.74 percent versus the first half of 2011, while international sales declined by 1.30 percent. In this earlier period, general economic performance does provide an explanation: U.S. growth in 2012 is estimated to have been 2.2 percent, versus only 1.2 percent for all developed countries.

Admittedly, this is a very preliminary analysis of a small (but important) sample. Further, high growth in U.S. sales last year might reflect device makers stuffing their channels and hospitals stockpiling before the tax took effect—but that is not a long-term solution to avoiding the tax. Also, the rate of growth of U.S. health spending has been shrinking. However, as Joe Antos of the American Enterprise Institute has explained, this has taken place since 2002: It is not a consequence of Obamacare.

As well, U.S. health spending is still growing at a clip well over three percent. The stall in medical-device spending can only be explained by a shift to other health spending. One of Obamacare’s selling points was that government-appointed experts would make U.S. health care more efficient, but it was never sold on the grounds that discriminatory taxation was going to change medical practice.

2013 is shaping up to be a very painful year for device makers in the U.S. Will there be a windfall of Obamacare revenues starting in 2014? Maybe—but it will have to be huge to overcome the sales-crushing effects of the excise tax.

RELATED
The Cost of San Francisco’s Reparations Proposal: Nearly $600,000 Per Household
What the Populists in Congress Get Right and Get Wrong
A Dispatch from the Corporatized Dystopia: Bring on the Chains!
Debt Ceiling Kabuki: Republicans Will Cave and U.S. Government Finances Will Get Even Worse
Texas Conservatives Should Not Support Banning Land Sales to Foreigners
Reckless Reparations Reckoning
San Francisco Falls Into The Abyss
It’s Time to Put a Brake on the Debt-Ceiling Charade
The IMF and Sri Lanka Are Partners in Delusion
Who Is ‘Accountable’ to Whom?
‘Belief in Freedom’ Is Bad for You
Does the U.S. Need to Contain China in Africa?