All good fighter jets are designed to climb into the sky. Unfortunately for the F-35, its price tag—as we have pointed out this week—is joining in the ascent as its fiscal wingman.

And it doesn’t matter whether you’re kicking the tires of the Air Force or Navy variants, as you can see in this chart(Figure 4). 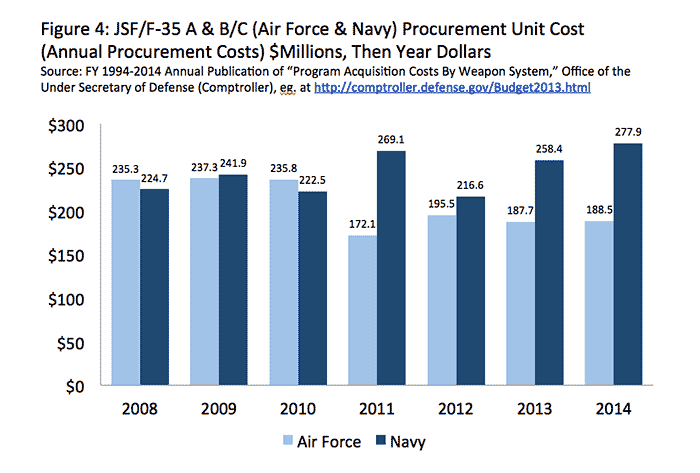 Since 2012, the unit costs of Navy models of the F-35 (the STOVL B variant and the aircraft-carrier capable C version, taken together as presented in the Pentagon comptroller’s annual “Program Acquisition Costs by Weapon System” reports) have increased significantly: from $216.6 million per aircraft to $277.9 million, an increase of $61.3 million or 28.3%.

The statements of Air Force Lieut. General Christopher Bogdan, the F-35 program manager, and Defense Secretary Chuck Hagel that F-35 unit cost “continues to come down” or is “coming down” remain false. There are years in the graph in Figure 4, above, where a specific year is lower than the preceding year, but that is not the current trend—for the F-35 program as a whole, or for either the Air Force or Navy variants separately. Moreover, the Navy variants will cost even more in 2014 than they did earlier (eg., from 2008 to 2010); overall the “learning curve” for the Navy variants of the F-35 has been a bending in the wrong direction.

On the other hand, Air Force models of the F-35 have shown an overall unit-cost decline since production in 2008, but the most recent trend is an increase.

Beyond the year-to-year trends, the most prominent characteristic of F-35 costs is how high the costs are.

In the eighth year of production—after significant opportunity for learning-curve efficiencies to occur—the Air Force’s A model appears to be stabilizing at approximately $190 million per copy. The Navy models’ unit cost has not stabilized; for the period 2012 to 2014 they are climbing dramatically, and they are now projected for 2014 to top $270 million each.

Depending on the model, the real-world cost of an F-35 varies today from $190 million to over $270 million—complete with engine and the other materials the Defense Department considers integral to an operative, delivered aircraft—and which are not always reported in documents and advocates’ assertions. If one opts to add the continuing costs of R&D ($1.9 billion that accompanies the purchase authorization for 29 aircraft for the Air Force and Navy in 2014), the unit cost would be still higher.

Even though Air Force F-35A unit costs appear to be stubbornly hovering at about $190 million per copy in the eighth year of production, Pentagon documentation for the F-35A program predicts it will plummet to $107.1 million in 2018, when a purchase of 60 for $6.4 billion is scheduled. In other words, the military projects the unit cost will decline by 43% in just four years—after it has come down by only 20% in eight years, and has remained stable at $190 million per aircraft for at least three years.

Learning-curve predictions for the Navy’s models are even more vexing. The B and C variants are both more complex and, therefore, expensive, than the A model. Both have been showing dramatic unit-cost increases over the last three years; they now cost more than they did when their production started in 2008.

Their learning curves have been more than a little negative. Prognostications that they will achieve anything approaching what Congress today considers “affordable,” especially as soon as 2015—when the Marines are declaring (actually pretending) their F-35Bs will achieve initial combat capability (termed “initial operational capability,” or IOC)—go beyond implausible to fantastic.

Another F-35 cost that will never be counted in the F-35 SAR is the additional expense the Air Force, Marines and Navy are paying and will pay out to the 2020s for extending the service life of F-16’s, A-10s, F-15s, AV-8Bs and F-18s to remain useable during the several years the F-35 is proving late to become operational.

That cost amounts to several billions, and it will not be reduced by the Marines’ and Air Force’s phony declaration of their F-35 variants becoming initially operationally capable (IOC) in 2015 and 2016 respectively: no F-35 will actually qualify for a properly defined IOC until 2019 when initial operational testing is (currently) scheduled to be finished. Yet another F-35 cost not to be counted in the F-35 SAR is the modifications required by the F-35B’s super-hot, high- velocity exhaust: amphibious warfare ships and even airfields require significant modification, as Battleland has previously reported.

The Defense Department’s SAR and its declaration that the F-35’s cost is coming down should be audited by an independent and competent party. Moreover, because GAO’s latest report on the F-35 sided so clearly with the new hopefulness for the F-35 (and, for example, GAO termed the dubious new SAR cost “savings” to reflect “the improvements that we found in manufacturing”), it should be questioned whether it, or rather its current management, should be the one to conduct such an audit.

In fact, the secretary of defense and the F-35 program manager should be asked to explain just what they meant and what data they employed when they said F-35 costs “are coming down.”

The appropriate question is not how much F-35 unit cost will shrink but how much it will grow.

Unfortunately, that’s a question neither Hagel nor Bogdan—nor the American taxpayer—will be able to answer for decades to come.

The next, and last, post: on final approach to fighter fiscal sanity.