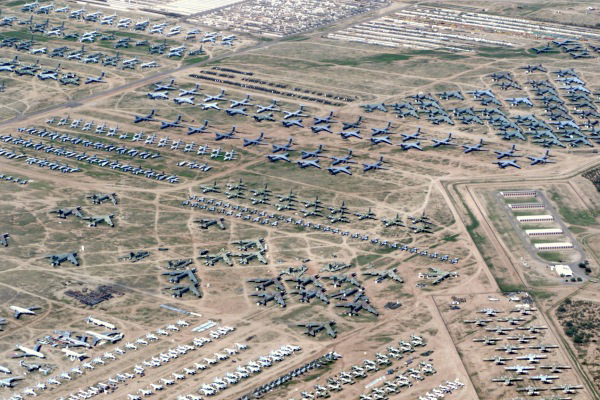 AIR FORCE PHOTO/TECH SGT. CARY HUMPHRIES
The way some folks are talking, the possibility of sequestration will turn the U.S. military into something like Arizona’s Davis-Mothan Air Force Base’s “boneyard” seen here.

Imposing itself only infrequently on the consciousness of the noise-makers who dominate presidential campaign coverage on TV and in the newspapers, the defense budget has been a second-tier issue in the 2012 elections.

That may properly be so, but the inattention of the top of the line political pontificators, who can be excused for not understanding the issue except at the most superficial level, has not elevated the quality of the debate at the lower tier.

Leaving the discussion to people like the chairman and ranking members of the House and Senate Armed Services Committees, sitting and former secretaries of defense, and the retired chairman of the Joint Chiefs of Staff has—surprisingly only to some—left us with a debate on the Pentagon budget that is hysterical, misinformed, and, most of all, misinforming. Moreover, many of the critics of these histrionics from the other side, including myself, have been so wedded to myths that both parties should be seen as the source of the dismal babble, not just the one. 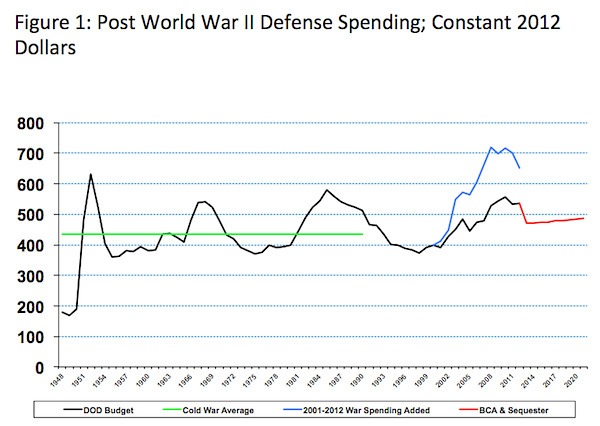 To understand the bogus nature of the one side, and to review some basics, take a look at this chart. It is the Pentagon’s rendition of its own budget since the end of World War II. It is in “constant” dollars that are adjusted for inflation, and the projection of spending beyond 2012 is from the Congressional Budget Office’s (CBO’s) calculation (in red) of the effect of the “sequester” of Pentagon funds in 2013 and thereafter—the result of the Republican’s deal with President Obama in the 2011 Budget Control Act to reduce Pentagon (and other) spending in the absence of a 2011 budget deal.

While anyone spending five minutes researching the history of U.S. defense spending is already familiar with this graph (or other versions of it), the constellation of defense budget heavies identified above won’t show it to you and would prefer that you cover your eyes right now. The graph says some interesting things they purposefully avoid telling you:

In the face of these historically unremarkable, modest reductions now scheduled to start in January 2013—and in the absence of an existential threat to the U.S. such as from the Soviet Union during the Cold War—we have the following characterizations from our defense budget leaders of what I have just described:

In a world where money is the focus of everyone in the system, less money—even if it’s just a little less—is a terrible, terrible thing. But at least we know what they think is important. 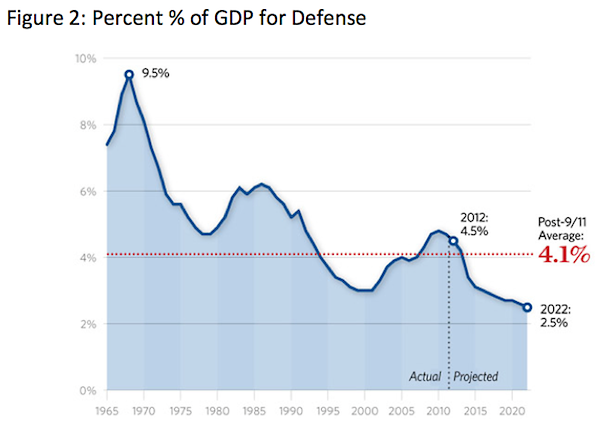 The graph above is the ultimate defilement of objective analysis in the defense budget debate. It is frequently used by the proponents of more spending; it has been used by both respected leaders, including Admiral Mullen and more dogmatic advocates, such as the Heritage Foundation. It attempts to depict growing defense spending as shrinking defense spending. The trick is to exploit the ratio of Pentagon budget to the US Gross Domestic Product.

What these people are trying to say is that the defense budget should comprise a certain percentage of the nation’s wealth and that because we spent at the rate of a larger percentage in the past, such as the Cold War, we should spend more now.

They will not say so but apparently they also believe that the defense budget should correspond to the number of U.S. McDonald hamburger drive-ins (that have also grown along with the nation’s economy). They have stolen an economist’s pedantic measure of proportionate spending to argue what the size of the defense budget should be. It is completely independent of external conditions, and it ignores what efficiency may or may not exist in actual spending. It is complete nonsense; it defines bombast masquerading as analysis.

I am hardly alone in my criticism of the money crazed hysteria being fomented by people like Senator McCain, Secretary of Defense Panetta, Admiral Mullen and the Heritage Foundation, but some of these critics, including myself I must admit, have used some relevant data that don’t make much sense either. The graph below is an example. 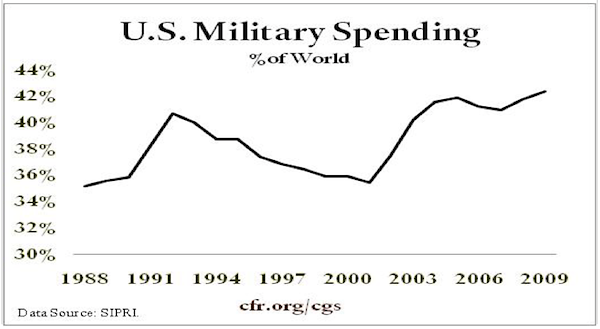 This graph (from the prestigious Council on Foreign Relations) will also be familiar to defense budget analysts; there are many similar versions out there—including by me: U.S. defense spending is not too far from half of the worldwide total.

The graph below might make more sense. It shows our spending—after the so-called “apocalypse” of sequester—compared to potential opponents, or in the case of China and Russia, rivals—not opponents. 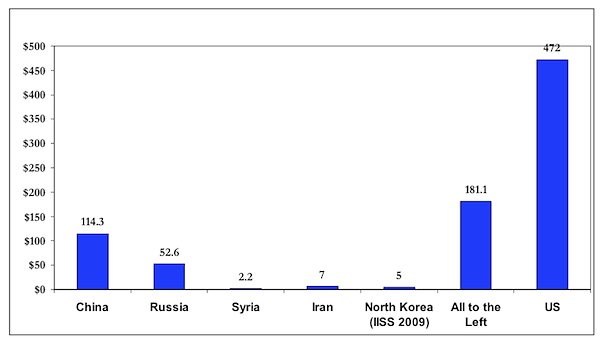 Finally, you might think, a graph that considers the threat and shows the relationship to U.S. defense spending. Even under sequester, the US is two and a half times that of any opponents or rivals—all combined. Surely, even after sequestration we are secure with that comfortable edge.

Not so quick. This graph measures money, not defenses. In our system, where money is valued above almost everything else, people make the mistake of equating spending levels with the adequacy of defense.

Consider the following: since 2001 and the start of the wars, we increased the Pentagon’s “base” budget by almost a trillion dollars, not including the additional more than $1 trillion spent on the wars. With all that extra money we did not increase the size of our forces, modernize basic equipment, nor increase training. In fact, we shrank the Navy and Air Force (while the Army’s combat brigade teams barely increased); we increased the average age of inventories of major equipment like ships, aircraft and tanks, and we reduced training time for combat-dedicated forces like fighter pilots and tank drivers, who got even less real training time than they did during the low readiness era of the Clinton administration.

In our system, where we watch ever so avidly the amounts of money spent—but less so the condition of the forces—more money does not necessarily translate into bigger, newer, more trained forces. In fact, it can mean less.

Does that mean our defenses vis-à-vis the Chinese or Russians, or even the Syrians, Iranians, or North Koreans, are deficient? If those entities are focused on performance and U.S. vulnerabilities (rather than just amounts of money), the answer is surely yes—just as the insurgents in Afghanistan and Iraq demonstrated by exploiting our inadequately armored Humvees (and the tactics we used) with crude, simple road mines (decorously called Improvised Explosive Devices or IEDs, as if they were something new and unpredictable).

Some of the critics of the money-tantrums that Senator McCain, Secretary Panetta and others have been throwing evidence basic complacency about the quality of American defenses. They assert that American military technology and leadership demonstrated its vast superiority (and a reason to be called the best in the world, if not history) in the early stages of Operation Iraqi Freedom in 2003 when the U.S. armed forces rolled over “Saddam Hussein’s military as a speed bump.”

In point of fact, Saddam Hussein’s armed forces (the worst in the world according to at least one specialist) truly were a speed bump. Iraq’s military leadership was hopelessly politicized and grossly incompetent; its uniformed combat personnel were demoralized and unwilling to fight even before the first munitions exploded, and—as some astute observers have noted—the performance of the U.S. military leadership at the start of the Iraq war was literally an embarrassment.

Victory was achieved by the guts, training and skill of personnel at the tactical level, and as some—including General Norman Schwarzkopf, after Operation Desert Storm against Iraq in 1991, have noted—had the two sides swapped weapons, the result would have been the same.

High tech, and even more so money, is no guaranty of success. If spending were the key to success, the British would have won our Revolutionary War, the Germans would have lost in France in 1940, the U.S. would have won in Vietnam, and the Iraq and Afghanistan wars would not have been the disaster they are.

In the meantime, our political-military leaders are dedicated to the proposition that the amount of money equates to the amount of defense. Our defense leaders are a long way from believing anything different. Just ask Leon Panetta, John McCain, Mike Mullen or the Heritage Foundation. They also have more company in that belief than you might at first think.