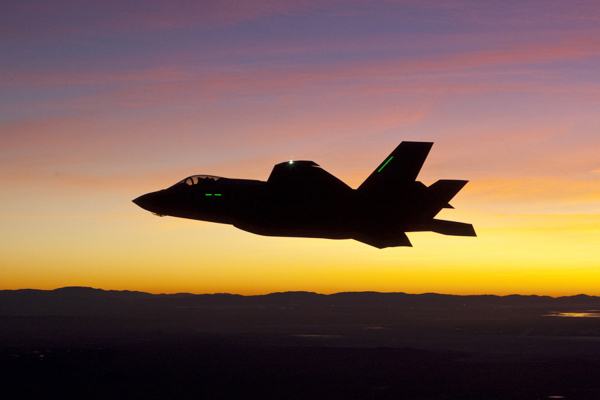 No, not because it predicts the loss of U.S. air superiority—its verbiage on that score is blithely reassuring—but because it evidences the Defense Department’s persistent refusal to acknowledge the overriding and fundamental air power issues. Bottom line—America’s combat aviation inventory and our air combat capability are:

The document starts out with wonkish assurances that the 30-year plan is fully consistent with the latest “strategic guidance” from the White House and Secretary of Defense Leon Panetta, and it works hard to convince readers that all is well.

The plan says “the multi-role nature of our assets makes them adaptive, fostering mission flexibility for the joint force.” However, the plan rather amazingly cites the MQ-9 Reaper as a successful example of multi-role design. (For the other side of the argument, see the recent series on Reaper at Battleland, summarized here.) Wisely, the plan did not cite the elephant in the multi-role room, the F-35 fighter, a classic example of the failure of such design.

The reassurance that multi-role design is a bulwark of the aviation plan is a defense-dilettante classic: seek refuge in prevailing conventional wisdom; cite an example intended to reassure but which to the semi-conscious is a virtually-laughable counter-example.

The plan also says it “provides the aircraft needed to cover the full complement of operations that U.S. military forces could undertake in the decades ahead...” and “procures the right aircraft at the right time to manage risk against emerging anti-access threats.”

By that, it surely means Iran in the short-term and China in the long, but specifics—such as identifying the technological challenges and how they are (supposedly) being met, are completely missing. There would seem to be the implicit assumption that asserting the correctness of the plan is all the proof that is required.

The Pentagon can be excused for thinking so; over the years it has, quite correctly, come to expect no one—either in Congress or think tanks—to challenge its labored technological assertions in any meaningful way.

The plan also seeks to reassure us that it is adaptive, and that the indistinct problems of an uncertain future have been fully accommodated: “Inventory levels are subject to change in response to operational needs, industrial base considerations and fiscal constraints.” And, the plan “will evolve as security needs change.”

However, in comparing this plan to the 2010 version, the major adaptations are in cosmetics and gimmicks, discussed below. Moreover, the fundamental challenges (the aging, the shrinking, the less-trained force, all at increasing cost) remain fundamentally unaddressed. If there has been no meaningful response to ongoing challenges, there is little reason to expect future ones to be addressed by anything beyond rhetoric and bureaucratic stunts.

This kind of nonsense is sure to be infused throughout testimony to Congress in the coming months, especially as electioneering heats up and Republicans seek to further trash Democrats for insufficient defense-budget increases and Democrats cower and plead that everything is fine.

Notably, however, the data in the plan, sparse as it is, makes clear to conscious readers that we can expect the negative inventory, aging, and cost trends of recent years—actually decades—to continue, even accelerate, as both Republicans and Democrats avoid the real issues.

Although the aviation plan tries to fuzz up the data, the shrinking inventory at increasing cost is immediately apparent in the first table and first graph on pages 8 and 9 (click on them to enlarge). The most critically important category of aircraft, “Fighter/Attack,” is scheduled to decline, if everything goes perfectly, in the ten years (2013 to 2022) the “30-year” Aviation Plan actually provides data for (when DOD cannot even accurately predict what will be in its budget one year ahead, someone in DOD had the good sense to ignore Congress’ risible assignment to make predictions for 30 years).

Specifically, the Fighter/Attach inventory is predicted to shrink by 151 aircraft (4.2%) from 3,567 planes in 2013 to 3,416 in 2022, if all goes according to plan. The text fuzzes up the cost by not showing any actual figures, just line graphs, for dollars. But with a protractor one can estimate the amounts. Air Force Fighter/Attack funding will increase from annual funding of about $12.5 billion to about $19 billion, or 52%. Naval Fighter/Attack funding will increase from about $13 billion to $15 billion. The combined amounts are an increase from $25.5 billion in 2013 to $34 billion in 2022, or a boost of $8.5 billion or 33%: 4.2% fewer fighter/attack aircraft will cost 33% more. 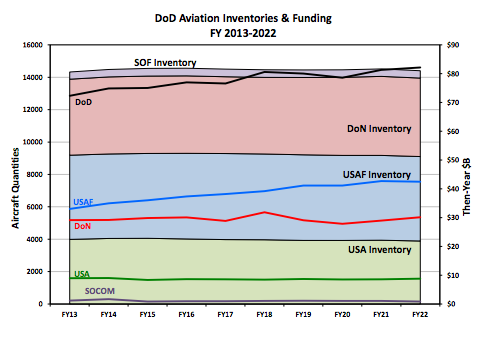 To inflate the force, perhaps to blunt the (politicized but accurate) charge that the inventory of these aircraft is the smallest since World War II, the 2012 plan adds in “back up, attrition reserve and other primary aircraft.” But, the addition of training, research, and attrition aircraft was apparently insufficient inflation; the Navy category in “fighter/attack” also adds in S-3 anti-submarine aircraft to the “fighter/attack” category. An unspecified number of these were added despite there being a separate “Anti-Surface/Submarine Warfare” category where the S-3 should have been counted; that is, if it had not already been retired from the fleet altogether, as a check with the Navy website and Wikipedia for the S-3 shows. Just how many S-3s were added for this padding is not specified in the text of the plan. In fact, there is no specific accounting of just what fighter/attack aircraft are actually counted in the plan; there is no tabulation by year and aircraft type.

It is all rather strange—and pathetic.

Some reporters caught some of these tricks. For example, David Axe at The-Diplomat.com found some of the fighter/attack shenanigans and also that the re-categorization of drones into a “ISR/Scout/C4” category with various manned aircraft masked the reduced production of Reaper drones.

That’ll be bad news for the overwhelmingly large population of drone advocates, but it is good news for those who appreciate how incapable (and expensive) drones are. (The plan also includes an assertion that the lesser number of Reapers and other drones will have “vastly improved sensors.” It is certainly true that they need them, but that goal, chased for years, has eluded these platforms, as years of DOT&E reports make abundantly clear.)

Emelie Rutherford at Defense Daily (subscription required) caught something strange in reporting total program costs. As Appendix II of the plan, titled “Sources of Cost/Funding Information,” states, there are competing estimates from the Cost Assessment and Program Evaluation shop in DOD, which claims to be independent, and what the plan calls “Service Cost Position” (SCP), which appears to be the in-house system advocates in the form of the program offices. As Rutherford reports, the CAPE estimates are the higher of the two, but neither the plan itself nor Rutherford’s article explains which office’s estimates are used in the report.

Nor do either point out that the so-called independent estimates from CAPE are highly suspect.

For example, the recent $1.113 trillion estimate for operating and support cost for the F-35, sponsored by CAPE, explains that they estimate the F-35 will cost only 42% more than the F-16, per hour, to fly and support. The F-35 is far more than 42% more complex than the F-16. We can expect it to be more in the range of the only other “Fifth Generation” aircraft, the F-22—built by the same manufacturer—even if, in some respects, the F-22 is less complex (no short takeoff, vertical landing capability, less software, less complicated sensors, etc.) than the F-35.

In 2010, the F-22 cost $63,929 per hour to operate—and that was before the F-22 was grounded in 2011 thereby making its flying-hour costs for that next year even higher. The 2010 amount is more than three times the per-hour cost of an F-16C ($20,952), according to USAF records. To be extremely conservative—inappropriately so—the F-35 can be expected to be twice the cost to operate and support an F-16, not just 42% more. None of these data are in the text of the aviation plan; the “independent” CAPE estimate reeks of being a lowball.

That being the case is only reinforced by the final paragraph of Appendix II. It says that while “it is difficult to calculate mathematically the precise confidence levels associated with CAPE life-cycle cost estimates....it is equally likely that the CAPE estimate will prove too low or too high for execution of the described program.” In other words, while they won’t commit to the confidence level of the estimate being precisely 50%, they do know the estimates (not specified in the report) are as likely to be wrong as right. Or put another way, to be more likely accurate, the estimates need to be higher; in the case of the F-35, among others, much higher.

Another issue where a semi-informed reading of the aviation plan reveals internal contradictions is the all-important aging issue. While many previous DOD documents steadfastly refuse to even address the topic, the plan does at least mention it, if only in passing. It states in various passages that aging “legacy” Air Force aircraft will be modernized; older Navy F-18s will be SLEPed (Service Life Extension Plan); Army helicopter airframes will be “zero-timed” or “remanufactured.”

It may or may not be a viable strategy to extend the usable airframe life of older aircraft; it would depend on the cost and whether the final product is a viable weapon, or just an airframe that was the target of a lot of spending. The costs can vary tremendously: from simply extending the usable life of the engine and airframe, to an almost unending list of new radars and other avionics, conformal fuel tanks and other semi-stealth appurtenances. Other evidence suggests that DOD is opting for the high-cost route, but the plan says nothing about the specifics. Again, it’s the “surely, no one will ask, so why bother explaining?” approach.

Such refurbished aircraft should certainly be subjected to operational test and evaluation and cost assessment, from a truly independent entity, just as new equipment should be. Such modifications and refurbishment of existing aircraft have become a huge area of spending over the last decade. However, the idea of assessing the efficacy and efficiency of service life extensions is absent. It is just another of the “no oversight needed or expected” approach to defense spending.

Sadly, however, there is no evidence that DOD is wrong to expect no oversight. Despite these and other gigantic flaws in the aviation plan, the noise of screams for more money by spending advocates is exceeded only by the echoes of even louder snoring rattling through the halls of Congress. It comes out of rooms labeled “Subcommittee on Oversight and Investigations” at the House Armed Services Committee and “Subcommittee on Airland” at the Senate Armed Services Committee.

There is one more passage in this Aviation Plan that merits comment. On the cover, it notes:

RELATED
Supreme Court Usefully Points Out Erosion of Founders’ Vision of the Constitution
The Sovietization of American Life
Think Twice Before Admitting Finland and Sweden to NATO
You Thought Tax Day Was Bad? Biden Has Worse in Store
Where’s the Growth? Biden Budget Brings Back Obama’s Secular Stagnation
Biden’s Budget Dims His One Shining Moment
The Defense Production Act Won’t Bring Us Supply-Chain Security
The Crowded Road to Kyiv
Putin’s Predictabilities
Our Elite is No Elite at All
Why Would Hispanics Drop the Left?
Global Posture Review Makes Only Minor Changes to American Hegemony