As a climate scientist, I am quite familiar with the background facts that Prof Michael E. Mann (now at Penn State U) so shamelessly distorts in his new book The Hockey Stick and the Climate Wars: Dispatches from the Front Lines.

Mann’s claim to fame derives from his contentious (and now thoroughly discredited) “hockeystick” research papers (in Nature 1998 and Geophysical Research Letters 1999). His idiosyncratic analysis of proxy (non-thermometer) data from sources like tree rings, ice cores, ocean sediments, etc. did away with the well-documented Medieval Warm Period (MWP - 900-1200AD) and Little Ice Age (LIA - 1400-1800AD)—documented by Prof. H.H. Lamb, the founding director of the Climate Research Unit of East Anglia U (CRU-EAU). Mann then asserted that the 20th century was the warmest in 1,000 years. His temperature graph, shaped like a hockeystick (on its side) immediately became the poster child of Al Gore and the IPCC, the U.N. science panel, to support their claim of anthropogenic global warming (AGW). 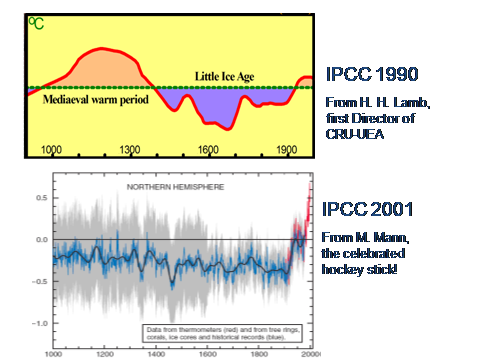 Two Canadian statisticians, Steven McIntyre and Ross McKitrick, soon found serious errors in Mann’s analysis; they even showed that random data fed into Mann’s algorithm would produce “hockeysticks.” To add insult to injury, while the 2001 IPCC report used Mann’s result to bolster its AGW claim, the most recent 2007 IPCC report no longer relies on it. Mann still defends it—sort of—and so do some of his uncritical supporters. We have had no word yet from Al Gore.

In his book, Mann distorts the e-mail record from the “Climategate” leak; those e-mails have not been altered or edited in any way. They document a conspiracy among a clique of British and U.S. climate scientists to control what goes into IPCC reports, and to keep contrary views by skeptics from being published in recognized science journals by manipulating the peer-review process.

The most complete discussion of the Climategate e-mails can be found in The Hockeystick Illusion: Climategate and the Corruption of Science by Andrew W. Montford. A more technical discussion has been ongoing in McIntyre’s blog at www.climateaudit.org.

Mike Mann also attempts to mislead readers by citing “facts.” He does this by mixing up temperature level (measured in degrees C) with temperature trends (degC per decade)—hoping no one would notice. While current levels are high (since the climate is still recovering from the LIA), the trend has been essentially zero for more than a decade—in spite of rapidly rising CO2 concentrations.

In reading Mann’s original papers, I noticed something very strange: his temperature record (blue curve in the IPCC report) based on proxy data suddenly stops in 1978 and is joined smoothly to the thermometer record from weather stations (red curve), which shows a steep rise in temperature. By contrast, atmospheric temperatures measured from weather satellites show only insignificant warming between 1978 and 1997—as do the independent data from weather balloons around the world.

Puzzled by this disparity, I e-mailed Mann (then at the U. of Virginia) and politely asked about his post-1978 proxy temperatures. All I got in return was a nasty reply—which only served to confirm my suspicion that Mann was hiding the data because they disagreed with the widely accepted thermometer record, which had suggested the existence of global warming. I believe that this is the true meaning of the phrase “Mike’s Nature trick,” used in the leaked Climategate e-mails—in conjunction with “hide the decline.” It all suggests manipulation of crucial data.

Naturally, I am anxious to learn if Mann’s suppressed post-1978 data show a warming. If they don’t, then the U.N.-IPCC’s case for AGW collapses—and so do all policies to control the greenhouse gas CO2. These policies include emission trading (“cap & trade”), carbon sequestration from power plants, and various costly schemes for developing alternative, “green” forms of energy. We may have already wasted hundreds of billions of dollars—for no good purpose. If so, then Mann and his supporters have much to answer for.

In 1999, Mann joined the U. of Virginia faculty as an assistant professor and left for Penn State six years later after failing to gain tenure. In fact, he was a member of my Department of Environmental Sciences, although we did not overlap.

In 2010, Virginia’s newly elected Attorney General Kenneth Cuccinelli, following Virginia FATA (Fraud Against Taxpayer Act) law, issued a Civil Investigative Demand on the university for Mann’s e-mails, work notes, and other documentation. The university, a state-supported institution, has resisted this demand, citing “academic freedom” and similar excuses. They have employed a private law firm and spent about $1 million so far.

I am quite disappointed by my university’s opposition to releasing Mann’s e-mails to Virginia’s AG. Those e-mails could clear up the mystery of “Mike’s Nature trick” and reveal hidden data. I am told that no objection was raised by UVa when Greenpeace requested the e-mails of skeptical faculty—including mine—under the Freedom of Information Act (FOIA). So much for the university’s “principled defense” of academic freedom.

Virginia’s Supreme Court has now turned down AG Cuccinelli’s demand, based on a technicality in the interpretation of the Virginia law. But the American Tradition Institute is trying to extract Mann’s e-mails from UVa, using the FOIA. Their chance for success is good—particularly since not only does the university now admits that some 12,000 e-mails exist (previously claimed to have been deleted)—but it has also released these e-mails to Michael Mann, even though he is no longer a faculty member.

The ATI case began quietly in January 2011, with a FOIA request to UVa for e-mails to and from Mann and 39 people, involving five grant programs. Seven months later, UVa produced almost 1,800 e-mails, but said it was withholding another 12,000, which they argued were not public record, or were exempt under Virginia FOIA law 2.2-3705.4(4). The case is scheduled for argument on April 16 in Manassas (in Prince William County, Virginia), in suburban Washington, DC. From there, the case will likely begin its ascent up the appeals court ladder and is poised to make law on how Virginia institutions may use FOIA to withhold from some and give to others. Not to mention create an international stink—if Mann’s e-mails show he has manipulated climate change data, an accusation for which he claims to have been cleared.

As Jackman further reports, Mann said his shared interest, with UVa, in his e-mails means that the e-mails can be released to him, but not to climate skeptics. The American Tradition Institute, the conservative group hoping to show that climate change scientists like Mann manipulated their data, argues that UVa can’t give the e-mails to one person and not another. By giving the e-mails to Mann, the university has waived any exemptions it’s claiming from the state Freedom of Information Act, ATI’s lawyer David Schnare argues.

Schnare then cited a Virginia attorney general’s opinion from 1983 that once a public body disseminates any record, “those records lose the exemption accorded by” FOIA. Federal case law appears to be clearer that “selective disclosure...is offensive to the purposes underlying the FOIA and intolerable as a matter of policy.”

Meanwhile, a new angle has developed in Vancouver, BC. Canadian climatologist Tim Ball jokingly wrote that “Mann should not be at Penn State but in a State Pen[itentiary].” Mann then improvidently sued Ball for libel. But this now leaves Mann open for the pre-trial discovery process, including a deposition under oath. We shall see how this case develops. Tim Ball has many ways to make his case in his defense. I am hoping he will focus on the suppressed post-1978 data. It would be fitting if Mann’s data are used to destroy the IPCC’s case for AGW.

One way or another, the truth will come out. And when it does, we will witness a major earthquake that will encompass IPCC scientists, politicians in America and Europe, and the U.N. Let’s hope we don’t have to wait too long for this to happen.

S. Fred Singer (1924–2020) was a Research Fellow at the Independent Institute and Professor Emeritus of Environmental Sciences at the University of Virginia.
Climate ChangeEnergy and the EnvironmentLaw and LibertyLitigationRegulationScience and Public Policy

RELATED
South Carolina Lawmakers Bear Responsibility for Supreme Court’s Abortion Ruling
‘Belief in Freedom’ Is Bad for You
Does the U.S. Need to Contain China in Africa?
Sins Against Children: On America’s moral compass in the face of Covid.
Analogical Reasoning and the Second Amendment
Should Courts Appoint Historians as Experts in Second Amendment Cases?
Did the Fourteenth Amendment Alter the Meaning of the Second Amendment?
When the Second Amendment’s Plain Text Covers Conduct, It Is Presumptively Protected
The Most Selfish Generation
America’s Rifle, the AR-15 Is Protected by the Second Amendment
My Day at Yale: A Great University Turns Human Trafficker
Twitter Files Confirm Censorship of the Great Barrington Declaration