Last Monday, the Supreme Court struck a blow for free trade among the states. In a 5-4 decision, the Justices ruled that states could not prohibit out-of-state wineries from shipping directly to consumers while allowing in-state wineries to do so. To put the matter more simply, New York can no longer discriminate against Californian goods just because the goods contain alcohol.

The Court’s decision represents a victory for consumers—but potentially a short-lived one. States may choose to let all wineries ship directly to in-state consumers, so wine drinkers can enjoy the convenience of ordering online, secure fast delivery, and avoid the substantial mark-ups of wholesalers. Alternatively, states may decide to force all wineries, including the local ones, to go through the wholesalers’ gauntlet.

For any other sort of product, the Court’s decision would have been a no-brainer. The Constitution’s Interstate Commerce Clause created a free-trade zone within the United States, so that citizens of different states can engage in trade without the hindrance of protectionist state laws. Virginia can’t levy a tax on Washington software to protect the jobs of Virginia’s programmers. Texas can’t regulate Florida oranges to inflate the profits of Texas orange growers.

But the case was murkier with regard to alcohol, thanks to the musty legal remains of Prohibition. The 21st Amendment, which repealed Prohibition, made one last concession to the Prohibitionists: it allowed individual states to continue regulating alcohol within their borders. If they wished, they could even outlaw alcohol entirely.

None did, of course. But they slyly exploited the language of the 21st Amendment to favor local wholesalers and wineries at the expense of out-of-state competitors. Michigan required out-of-state wineries to sell their products through local distributors—while permitting in-state wineries to ship directly to consumers. New York imposed a similar requirement discriminating against foreign—e.g., Californian—grapes.

The Supreme Court struck both laws down. The majority realized the 21st Amendment does not create a blanket exception to the Commerce Clause. If it did, then it would also supersede other parts of the Constitution, like the 14th Amendment’s equal protection clause. States could even pass laws barring the sale of out-of-state alcohol to African-Americans, while allowing sale to whites! But the Court sensibly argued that the 21st Amendment interacts with the Commerce Clause without overriding it.

As Justice Kennedy argued in the majority opinion, “The aim of the Twenty-first Amendment was to allow States to maintain an effective and uniform system for controlling liquor by regulating its transportation, importation, and use. The Amendment did not give States the authority to pass non-uniform laws in order to discriminate against out-of-state goods, a privilege they had not enjoyed at any earlier time.”

Wholesalers constitute a powerful lobby, which will assuredly try to exploit the last remaining loophole by banning all direct sales to consumers, whether from in-state or out-of-state wineries. They will do all they can to convince legislators and the general public that wholesalers are needed to collect taxes, ensure quality, and protect children from the demon drink. If such fig-leaf justifications succeed, the wholesalers’ privileged position will be safeguarded and their future profits assured, while wine consumers get the short end of the stick. We can only hope the public will stand up to the special interests, and tell their representatives to free the grapes.

Douglas Glen Whitman is an Associate Professor of Economics at California State University Northridge and a Research Fellow at the Independent Institute.
Defense and Foreign PolicyFDA and Drug RegulationInternational Economics and DevelopmentTrade

RELATED
End the COVID National Emergency Now
Diabetic Complications and Economic Fundamentals
Where Is the Free Market Utopia?
‘Treason’ Goes Way Beyond Cato And Mercatus: Lots of Economists Oppose the Jones Act
No on Prop. 31: Big Police Can Be Worse than Big Tobacco
California’s Proposition 29 Is about Union Extortion, Not Dialysis Care
Is This the End of the U.S.-Saudi Partnership?
Economic Essentials and Economic Errors 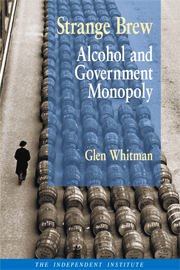