Is Extreme Weather Causing the World’s Rivers to Dry Up?: News: The Independent Institute

A recent CNN article entitled “The World’s Rivers are Drying Up from Extreme Weather. See How 6 Look from Space” purports to argue that rivers such as the Colorado, Yangtze, Rhine, Po, Loire, and Danube are dwindling due to “a painful lack of rain and relentless heat waves.” The article concludes that “the human-caused climate crisis is fueling extreme weather across the globe,” which is responsible for making these rivers shrink in both length and breadth and, potentially, become virtually impassable.

While it is true that these rivers are indeed in low-flow conditions, it has long been argued that floods, droughts, and streamflow are driven by several factors in addition to precipitation. Yes, a lack of precipitation over an extended period of time will likely cause low flows in the area’s rivers. But it is not necessarily true that the existence of low flows indicates that a lack of precipitation was the culprit. Humans need water not just to survive, but to carry out a variety of water-intensive industries including paint and coating manufacturing, paper mills, wineries, and pesticide and other agricultural chemical manufacturing, for example. Agriculture too has a high demand for water, and the simple increase in population may tax existing water supplies.

So, it is unrealistic to simply assume that low flows in the six rivers upon which the CNN article focuses are caused by a lack of rainfall and the “relentless heat waves” that have supposedly swept the planet. In fact, the usual mantra from the climate alarmists is that rainfall will increase, not decrease. The rationale for this is that warmer conditions will lead to more evaporation (remember that more moisture can be held in saturated air at warmer temperatures than at colder temperatures), which, in turn, lead will to more rainfall, since “what goes up, must come down.” But, contrary to the actual physics, we are told that the climate becomes more “variable” under climate change in what has been referred to as “climate weirding.” This helps climate alarmists to argue that both floods and droughts will increase, as well as that both more snowfall and less snowfall is indicative of climate change.

To determine whether CNN is correct in suggesting that rivers are drying up due to “the human-caused climate crisis,” let’s take a closer look at some of these rivers.

Let’s start close to home. The Colorado River is cited as the first example, and, although CNN attributes its drying to the “historic drought in the US West,” they do not suggest that this drought is human induced. They do mention, however, that “around 40 million people in seven states and Mexico rely on the river’s water for drinking, agriculture and electricity.” But an evaluation of the current conditions from the USGS National Water Dashboard indicates, as shown below, that many stream gauge stations in western Colorado and Utah are near normal, and in New Mexico and Arizona, they are above and much above normal. 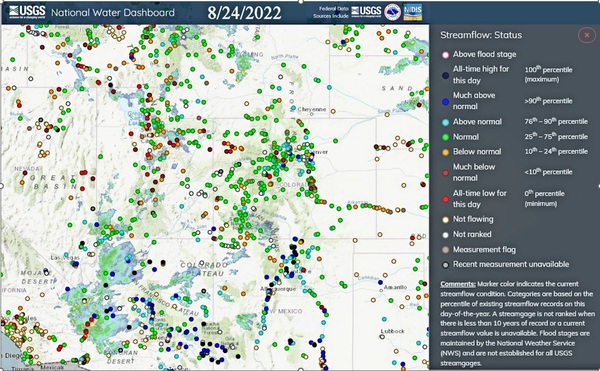 The black and dark blue dots indicate streamflow that is either at or near a record high, and the current forecast is for more rainfall. In fact, the 20th Century was the wettest century of the past millennium. Lake Mead (highlighted by the CNN article) is drying up, not because the streamflow in the region has gone to near zero, but, as University of Alabama climate scientist Roy Spencer shows, because the population of the “desert” has grown so much that the water resources of the region cannot support the water demand.

Next, the CNN article focuses on the Yangtze River in central China. The controversial Three Gorges Dam lies on the Yangtze River, and operation of the dam greatly affects the water levels of both the upstream and downstream portions of the river. Three Gorges Dam is the world’s largest hydroelectric dam, but it also serves to enhance the shipping ability of the Yangtze River by controlling streamflow and reducing flood potential for downstream communities. It has adversely affected the landscape and ecology of the region, which is why it has become highly controversial, both domestically and internationally.

Earlier this year, an article in Science Alert (from a published study in Geophysical Research Letters) suggests that the biggest climate change threat to East Asia arises not from drought but from “atmospheric rivers” that will increase rainfall from more frequent and more severe events. So, which is it—lower flows or more flooding?

The remaining four rivers on which the CNN article focused lie in Europe—the Rhine in Germany, the Po in Italy, the Loire in France, and the Danube in Romania. For the Rhine, wetland restoration in the German mountains has had an impact on summer flow, particularly because “the recession flow following the peaks is higher” (i.e., the decrease in flow following the flood peak is increased), which would, according to Wetlands International, cause the water to drain faster, thereby creating a low flow sooner. The Po, too, is low due to a drought, but its flow was lower seventy years ago—well before purportedly manmade global warming took hold. The effect of draining wetlands and extensive industrialization also has had an effect on the river. Euronews reported an expert’s view that while the Loire is “drier than usual this year,” some of the photos of the Loire “are at least a dramatisation of the situation.” And the Danube in Romania is affected by extensive urban land development, the loss of flood plains, and deforestation. All three will exacerbate floods but decrease the flow during low flow conditions as little water exists in transit to the river to sustain the flow when rainfall is low.

However, the single most important factor that debunks the CNN argument that “the human-caused climate crisis is fueling extreme weather across the globe” that is causing the world’s rivers to dry up is in the pictures they choose to demonstrate their point. For five of the six rivers on which they focus (all but the Colorado River), their before-and-after aerial photography compares August 2022 to... August 2021—just one year before. The dramatic change in just one year leads to the inescapable conclusion that this is not a climate issue; rather, it is a normal change in yearly weather conditions and local effects in dam operations. Climate change is measured over periods of at least 30 years, not a single year. On the Colorado River, diminishing streamflow is not the culprit for the low flow conditions; the highly increasing demand for water by a rapidly growing population in the desert Southwest of the United States is a far better explanation.

As is often the case, the facts usually disprove the alarmist position associated with climate change. This is no different with respect to the CNN article.

David R. Legates is a Research Fellow at the Independent Institute, retired Professor of Climatology in the Department of Geography and a retired Adjunct Professor in the Department of Applied Economics and Statistics at the University of Delaware.
American HistoryBusiness and EntrepreneurshipClimate ChangeContemporary PoliticsEconomic History and DevelopmentEconomyEnergy and the EnvironmentEnvironmental Law and RegulationGovernment and PoliticsGovernment PowerLaw and LibertyNatural ResourcesPolitical TheoryWater Resources

RELATED
Fine. Blame Ticketmaster for the Taylor Swift Fiasco, but Don’t Overlook the Fundamental Cause.
Can’t Get Taylor Swift Tickets? Blame Other Fans, Not Ticketmaster
End the COVID National Emergency Now
Left Libertarians, Dobbs, and the Ninth Amendment
Congress Must Fix the Electoral Count Act to Avert a Crisis
Why Doesn’t This Economist Want His Daughter to Be a Feminist?
As California Schools Fall Even Further, A Charter School Shows How To Succeed
Why Do Progressives Support Democrats? Part Two
There Are 8 Billion People. We Should Celebrate Superabundance, Not Lament ‘Overpopulation’
What Difference Did the Election Make?
Why Do Progressives Support Democrats? Part One
Enjoyment of the Upcoming World Cup Will Come at a Price