December 7, 1941: A Setup from the Beginning: News: The Independent Institute

←  NEWS
COMMENTARY
December 7, 1941: A Setup from the Beginning
December 7, 2000
By Robert B. Stinnett
Also published in Honolulu Advertiser  « Show Fewer

At issue is American foreknowledge of Japanese military plans to attack Hawaii by a submarine and carrier force 59 years ago. There are two questions at the top of the foreknowledge list: (1) whether President Franklin D. Roosevelt and his top military chieftains provoked Japan into an “overt act of war” directed at Hawaii, and (2) whether Japan’s military plans were obtained in advance by the United States but concealed from the Hawaiian military commanders, Admiral Husband E. Kimmel and Lieutenant General Walter Short so they would not interfere with the overt act.

The latter question was answered in the affirmative on October 30, 2000, when President Bill Clinton signed into law, with the support of a bipartisan Congress, the National Defense Authorization Act. Amidst its omnibus provisions, the Act reverses the findings of nine previous Pearl Harbor investigations and finds that both Kimmel and Short were denied crucial military intelligence that tracked the Japanese forces toward Hawaii and obtained by the Roosevelt Administration in the weeks before the attack.

Congress was specific in its finding against the 1941 White House: Kimmel and Short were cut off from the intelligence pipeline that located Japanese forces advancing on Hawaii. Then, after the successful Japanese raid, both commanders were relieved of their commands, blamed for failing to ward off the attack, and demoted in rank.

President Clinton must now decide whether to grant the request by Congress to restore the commanders to their 1941 ranks. Regardless of what the Commander-in-Chief does in the remaining months of his term, these congressional findings should be widely seen as an exoneration of 59 years of blame assigned to Kimmel and Short.

But one important question remains: Does the blame for the Pearl Harbor disaster revert to President Roosevelt?

A major motion picture based on the attack is currently under production by Walt Disney Studios and scheduled for release in May 2001. The producer, Jerry Bruckheimer, refuses to include America’s foreknowledge in the script. When Bruckheimer commented on FDR’s foreknowledge in an interview published earlier this year, he said “That’s all b___s___.

Yet, Roosevelt believed that provoking Japan into an attack on Hawaii was the only option he had in 1941 to overcome the powerful America First non-interventionist movement led by aviation hero Charles Lindbergh. These anti-war views were shared by 80 percent of the American public from 1940 to 1941. Though Germany had conquered most of Europe, and her U-Boats were sinking American ships in the Atlantic Ocean—including warships—Americans wanted nothing to do with “Europe’s War.”

However, Germany made a strategic error. She, along with her Axis partner, Italy, signed the mutual assistance treaty with Japan, the Tripartite Pact, on September 27, 1940. Ten days later, Lieutenant Commander Arthur McCollum, a U.S. Naval officer in the Office of Naval Intelligence (ONI), saw an opportunity to counter the U.S. isolationist movement by provoking Japan into a state of war with the U.S., triggering the mutual assistance provisions of the Tripartite Pact, and bringing America into World War II.

Memorialized in McCollum’s secret memo dated October 7, 1940, and recently obtained through the Freedom of Information Act, the ONI proposal called for eight provocations aimed at Japan. Its centerpiece was keeping the might of the U.S. Fleet based in the Territory of Hawaii as a lure for a Japanese attack.

President Roosevelt acted swiftly. The very next day, October 8, 1940, the Commander-in-Chief of the U.S. Fleet, Admiral James O. Richardson, was summoned to the Oval Office and told of the provocative plan by the President. In a heated argument with FDR, the admiral objected to placing his sailors and ships in harm’s way. Richardson was then fired and in his place FDR selected an obscure naval officer, Rear Admiral Husband E. Kimmel, to command the fleet in Hawaii. Kimmel was promoted to a four-star admiral and took command on February 1, 1941. In a related appointment, Walter Short was promoted from Major General to a three-star Lieutenant General and given command of U.S. Army troops in Hawaii.

Throughout 1941, FDR implemented the remaining seven provocations. He then gauged Japanese reaction through intercepted and decoded communications intelligence originated by Japan’s diplomatic and military leaders.

The island nation’s militarists used the provocations to seize control of Japan and organized their military forces for war against the U.S., Great Britain, and the Netherlands. The centerpiece—the Pearl Harbor attack—was leaked to the U.S. in January 1941. During the next 11 months, the White House followed the Japanese war plans through the intercepted and decoded diplomatic and military communications intelligence.

Japanese leaders failed in basic security precautions. At least 1,000 Japanese military and diplomatic radio messages per day were intercepted by monitoring stations operated by the U.S. and her Allies, and the message contents were summarized for the White House. The intercept summaries were clear: Pearl Harbor would be attacked on December 7, 1941, by Japanese forces advancing through the Central and North Pacific Oceans. On November 27 and 28, 1941, Admiral Kimmel and General Short were ordered to remain in a defensive posture for “the United States desires that Japan commit the first overt act.” The order came directly from President Roosevelt.

As I explained to a policy forum audience at The Independent Institute in Oakland, California, which was videotaped and telecast nationwide over the Fourth of July holiday earlier this year, my research of U.S. naval records shows that not only were Kimmel and Short cut off from the Japanese communications intelligence pipeline, so were the American people. It is a coverup that has lasted for nearly 59 years.

Immediately after December 7, 1941, military communications documents that disclose American foreknowledge of the Pearl Harbor disaster were locked in U.S. Navy vaults away from the prying eyes of congressional investigators, historians, and authors. Though the Freedom of Information Act freed the foreknowledge documents from the secretive vaults to the sunlight of the National Archives in 1995, a cottage industry continues to cover up America’s foreknowledge of Pearl Harbor.

This article is adapted from Robert B. Stinnett's presentation before the Independent Policy Forum, “Pearl Harbor: Official Lies in an American War Tragedy?”, held May 24, 2000. 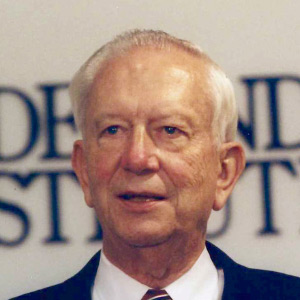 Robert B. Stinnett (1924-2018) was a Research Fellow at the Independent Institute and author of the book, Day of Deceit: The Truth about FDR and Pearl Harbor.
Defense and Foreign PolicyGovernment and PoliticsGovernment SecrecyNationalismPhilosophy and ReligionTerrorism and Homeland Security

RELATED
Vote Like a Woman: When You Vote, Remember Who Has Recently Most Hurt Women
How Evil Are Politicians? This Book Says ‘Very’
The Tentacles of the Social Media Octopus
California Tries to Delay Release Of K–12 School Test Scores Until After Election
Will Biden’s Support for the Iran Protests Backfire?
Reagan Was Right: Big Government Corrupts the Military Too
Killing of Al-Qaeda Leader Shouldn’t Obscure Some Hard Questions
Salman Rushdie and the Price of Free Speech
Can the U.S. Become Exceptional Again?
FBI, R.I.P.?: The agency has become dangerous to Americans and an existential threat to their democracy and rule of law.
Our New Antoinettes
The Pétain Presidency