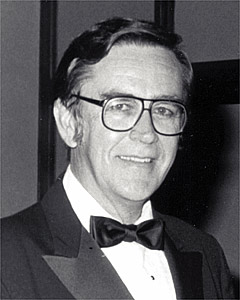 Our dear friend and former colleague, the esteemed economist, Dr. Martin Bruce Johnson, suddenly died of a heart attack, on October 18, 1999, at the age of 66. He is survived by his wife, Elenore, and their three children, Karla, Martin, and Paula.

Bruce Johnson was the founding research director of The Independent Institute; emeritus professor of economics at the University of California, Santa Barbara, where he had taught for thirty years; and former president of the Western Economic Association.

A native of St. Paul, Minnesota, Bruce Johnson received his undergraduate degree from Carleton College in 1955 and his Ph.D. in Economics from Northwestern University in 1962 where he was also a fellow for both the Ford and Earhart Foundations. In 1961, he joined the economics faculty at the University of Washington and subsequently became associate professor and acting director of the Institute for Economic Research. During this time, he met and married Elenore Kershner. In 1968, the couple left Seattle and settled in Goleta, California, when he became a professor in the department of economics at the University of California at Santa Barbara. In 1970, he was named chairman of the department, and during his thirty-year tenure at the university, he served in many capacities.

In his career, he combined a love for teaching with scholarly research, consulting for business and government, and public policy debate on a host of economic and social issues.

As one of the original appointees to the California Coastal Commission in 1973, Johnson resigned after six months in total disgust as he witnessed the rampant corruption, ignorance, and injustice underlying the commission’s operations. Vowing not to let such political buffoonery go unchallenged, he then set himself on a course to work to revolutionize public policy debate. As a result, in addition to his technical work in economics, he began utilizing his skills as a scholar to critique government folly.

Before joining The Independent Institute in 1986, Johnson had worked with Institute President David J. Theroux in organizing the Pacific Research Institute (PRI), where he served as Research Director (1979–82) and Chairman of the Board of Academic Advisors (1982–86). Together leaving PRI in 1986, Johnson worked with Theroux in establishing The Independent Institute as a uniquely non-politicized, scholarly, public policy research and educational organization aimed at avoiding the “political correctness,” uneven quality, and limited impact so common elsewhere and in public debate.

During his career, Johnson authored or edited thirteen books and monographs, including the following ones produced over the years through the close partnership between him and Theroux:

In all, the collaboration between Johnson and Theroux produced a total of 38 books, two of which were named Outstanding Academic Book by Choice Magazine, four of which received the Sir Antony Fisher International Memorial Award, and two of which received the Mencken Award for Best Book. He further authored over forty articles and reviews, and he was a contributor to eleven additional books.

In his career, Bruce Johnson was responsible for boldly advancing the study of such areas as market and business behavior, industrial organization, antitrust, energy and environmental economics, and legal liability. In his work, he interwove the strengths of law and economics with the public choice, neoclassical, and Austrian schools of economics.

“Bruce Johnson was a dear, dear friend, mentor and colleague for twenty years,” said David Theroux. “He was truly one of a kind—a man absolutely exemplary in every respect, and we will miss him deeply.

“I first met Bruce in 1977 shortly after I moved to California to organize the Cato Institute’s then new program of research, publications, and conferences. In all the years since, his wisdom, integrity, and generous spirit inspired and guided all of those who have had the pleasure and privilege to work with him.

“Bruce was passionate about truth and had little patience for the deception, foolishness, and conceit of anything, especially politics and government. But, he was always a man who combined a quiet elegance of impeccable character with a genuine warmth for others. He was greatly admired and well-liked by others, and we will always remember him with great fondness and respect.

“Bruce Johnson embodied the finest elements of personal and professional integrity, scholarly excellence, an innovative and courageous spirit, a generous warmth and humility, and an unwavering commitment to the principles of individual liberty. We are all deeply enriched from his life, work, and example, and the success of the Independent Institute is in no small measure the result.”

To honor this tradition and his memory, the Independent Institute has established the M. Bruce Johnson Memorial Fund to advance scholarly excellence in public policy research and the values and institutions of a free society. A challenge grant has been made to match any tax-deductible contributions made to the Fund, and those interested in contributing may contact the Development Director at (510) 632-1366 or send email using our webform.