←  ABOUT US
About
›
Board of Directors, In Memoriam
›
Person Detail
David J. Theroux
Founder, President and Chief Executive Officer

Gettr
David J. Theroux (May 25, 1949 – April 23, 2022) was Founder, President and Chief Executive Officer of the Independent Institute and Publisher of The Independent Review. He received his B.S., A.B., and M.S. from the University of California, Berkeley, and his M.B.A. from the University of Chicago. He was a Juror for the 2017 Brock International Prize in Education, and books and films produced by Mr. Theroux have been the recipients of scores of awards, including three Eric Hoffer Book Award Grand Prizes, Templeton Freedom Award, two Mencken Awards for Best Book, eight Sir Antony Fisher International Memorial Awards for Best Book, three Benjamin Franklin Awards, ten Independent Publisher Book Awards, Peter Shaw Memorial Award, and three Choice Magazine Awards for Outstanding Book. He was Founder and President of the C.S. Lewis Society of California, and was founding Vice President and Director of Academic Affairs for the Cato Institute and President of the Pacific Research Institute for Public Policy. He previously served both as Research Assistant for the economist Yale Brozen and Director of the Lecture Series on Economic Science in the Graduate School of Business at the University of Chicago.
Read Full Bio

Having directed and published 140 scholarly books, Mr. Theroux is the editor of the books, The Energy Crisis, Private Rights and Public Lands (with P. Truluck), and Politics and Tyranny, and his scholarly articles have appeared in the Journal of Private Enterprise, Culture and Civilization, The Independent Review, and Society, as well as such volumes as Hayek: A Collaborative Biography (ed. by Robert Leeson), Everything Voluntary: From Politics to Parenting (ed. by Skyler Collins), The Family and Economy in the Future of Society, and Resolving the Housing Crisis: Government Policy, Decontrol, and the Public Interest (ed. by M. Bruce Johnson). His articles and reviews have also appeared in USA Today, Los Angeles Times, Wall Street Journal, Christian Science Monitor, Investor's Business Daily, Washington Times, St. Louis Post-Dispatch, Dallas Morning News, Insight, other publications, and he has appeared on ABC, MSNBC, Fox Business Network, CNN, C-SPAN, NPR, Voice of America, and other local, national, and international TV and radio networks and programs.

A contributor to American Conservatism: An Encyclopedia, he was a member of the Mont Pelerin Society, he has been a director of eight corporations and four foundations, and he has been a member of the Nominating Committee for the Heinz Awards, William I. Koch Crime Commission, Prison Advisory Board for the California Little Hoover Commission, Board of Advisors of the Libertarian Christian Institute, and Executive Committee for the Templeton Collegiate Honor Rolls for Education in a Free Society. 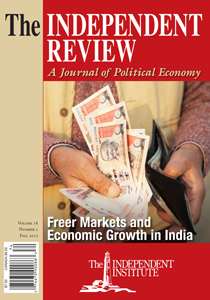 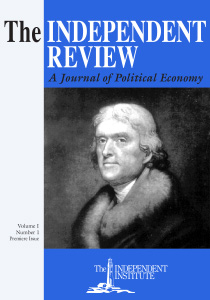