←  ABOUT US
About
›
Research Fellows
›
Person Detail
Morgan E. Hunter 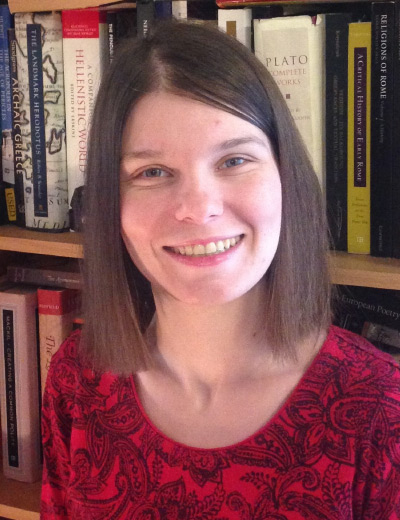 Hunter has been a Frank and Kathy Baxter Fellowship at the Institute for Humane Studies, Richard Weaver Fellow for the Intercollegiate Studies Institute, Dietrich von Bothmer Classical Scholar to International House at UCB, and Diebold Fellow in Indo-­European Linguistics at UCB. Phi Beta Kappa, she is the recipient of the Walter J. Kropp Award and the Arete Prize.

She has translated De Locutione et eius Instrumentis by Hieronymus Fabricius from medieval Latin; presented the paper, “Fanum Voltumnae at Volsinii, Metropolis That Might Have Been,” in the Bryn Mawr Graduate Group Symposium at Bryn Mawr College; and participated in the Johns Hopkins CTY Summer Academic Programs at Dickinson College (2008—Russian History;2007—Modern European History) and at Franklin and Marshall College (2006—Greek II).

Hunter has taught classical philosophy, political science, 19th century U.S. social history, ancient and medieval political philosophy, and Latin at UCB, as well as Latin at the Bowman International School. In her work, she has a reading knowledge of Latin, Greek, French, German, Italian, and Russian, plus some Sanskrit; "can muddle through" Hittite, Osco-­Umbrian, and Tocharian; and she has further studied Japanese and Arabic.