What We Really Need Is a 490 B.C. Project: News: The Independent Institute

Before 1776 A.D., before 1619, before 1492, before A.D., there was 490 B.C. and the Battle of Marathon, which freed Athens to found our civilization. Obviously, this date and occasion deserve study and remembrance. Indeed, Thomas Jefferson argued in his Notes on the State of Virginia (1785) that the main goal of education in a democracy is to enable the people to defend their liberty, and that Greek, Roman, and English history is the subject that best equips citizens to do so. Edith Hall, Gaisford lecturer at Oxford University, has added that such a defense of liberty requires “utopian thinking, fearlessness about innovation, critical thinking, and the ability to argue cogently.” All can be learned, she wrote, from the “succinct, entertaining formulations in the works of the Greeks.”

Yet a recent Independent Institute white paper, which I co-authored with Victor Davis Hanson and Williamson M. Evers, examined the state of teaching of the classical world in American education and found it sadly wanting. We concluded that the logical way to repair this deficiency is to import into American high schools the British GCSE and A-level courses in Classical Civilization, which are quite comprehensive but taught in English, so mastery of Latin and Greek is not required.

The Greeks and Romans had different gods than we have; they spoke different languages from ours; and had radically different technologies and presuppositions about the nature of the universe. Yet they faced many of the same problems and dilemmas that we now face. They were uniquely self-critical and framed their solutions through empiricism and reason, which marked a departure from prior civilizations. Studying them gives us a different perspective on those problems and can help us as educated citizens to find our own solutions.

One cannot seriously study Shakespeare’s Julius Caesar or Eugene O’Neill’s Mourning Becomes Electra without knowing something about Roman history and Greek tragedy. One really cannot study any European or American philosopher of the past 400 years without knowing Plato and Aristotle. However, many American school districts currently employ a chronological straitjacket that confines general study of the ancient world to middle school. (Those that teach it in high school usually do in a “World History” class that devotes only two or three weeks to the classical world.) Further teaching of the classical world is pursued only in specialized Latin courses at a few, mostly private, schools. Since college-level study of the humanities requires a good understanding of the ancient world and its authors, the classical world ought to be taught in high schools. These classical foundations are just as important to the humanities as algebra or high-school chemistry are to STEM. Learning Latin or ancient Greek can remain a requirement for those who wish to major in the classics, but they shouldn’t be the only way to study the classical world.

The educational system in Britain is rather different from the U.S. In America, students are required to select a specialization (their major) for only the last two years of college. In Britain, students are admitted to college in order to “read” a particular course of study, e.g., mathematics or history. Thus college in Britain corresponds to the last two years of American colleges (and perhaps also the first year of graduate school). Consequently, the last two years of British high schools (the “sixth form”) are when students take the introductory courses that Americans typically take in their college freshman or sophomore years. These pre-college courses culminate in tests called Advanced Levels or “A-levels.” College-bound students typically take three A-level courses in subjects preparatory to the course they intend to study in college.

The percentage of students who attend college in Britain is approximately half that of the U.S., so most British students do not attend sixth form or take A-levels. Instead, most students complete only the two years before that. All students, both those intending to go on to the sixth form and take A-levels, and those intending to graduate immediately, are required to take tests called “GCSEs” in the subjects they studied. A good non-collegiate education, the so-called English Baccalaureate, currently requires passing scores on five GCSE exams: English Literature, Mathematics, Science, History, and an Ancient or Modern Language.

Over the past several decades, Advanced Placement courses and exams have sprouted in American high schools, intended for academically inclined students who are prepared to take in high school the equivalent of the introductory college courses normally taught in the freshman and sophomore years. These courses, taught in the final two years of high school, tend to cater to students who, like their British counterparts, already know their intended college major by grade 11 and want to take upper-division courses as soon as they get to college. So there is a rough equation: A-level courses equal AP courses. Likewise, again roughly: GCSE courses equal non-AP courses.

In our Independent Institute report, we propose importing the British GCSE and A-level courses in Classical Civilization into American high schools to be taught in the eleventh and twelfth grades. The GCSE version would be the standard class, with the A-level version as the AP class. Oxford’s Edith Hall has written that Britain’s GCSE and A-level courses in Classical Civilization have been “a success whenever introduced,” and should be taught “across the state-school sector.” They also can and should be taught in American high schools, ultimately for the reason enunciated by literary polymath Garry Wills: In “law and politics, philosophy, oratory, history, lyric poetry, epic poetry, and drama” there are continuing references back to the origins of these forms in our civilization. It helps students, in all these cases, Wills argued, “to know something about the originals.” 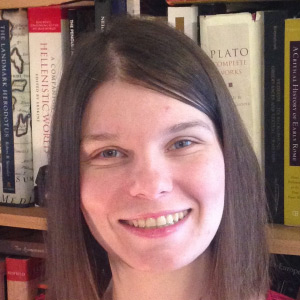 Morgan E. Hunter is a Research Fellow at the Independent Institute and Senior Research Assistant at the Hoover Institute.

RELATED
End the COVID National Emergency Now
Left Libertarians, Dobbs, and the Ninth Amendment
Congress Must Fix the Electoral Count Act to Avert a Crisis
Why Doesn’t This Economist Want His Daughter to Be a Feminist?
As California Schools Fall Even Further, A Charter School Shows How To Succeed
Why Do Progressives Support Democrats? Part Two
There Are 8 Billion People. We Should Celebrate Superabundance, Not Lament ‘Overpopulation’
Why Do Progressives Support Democrats? Part One
Where Is the Free Market Utopia?
Vote Like a Woman: When You Vote, Remember Who Has Recently Most Hurt Women
Permissible and Impermissible Incendiary Speech?
Michael Bloomberg Has Become the Advocate that Higher Education Needs the Most