←  ABOUT US
About
›
Person Detail
Bill Cassidy 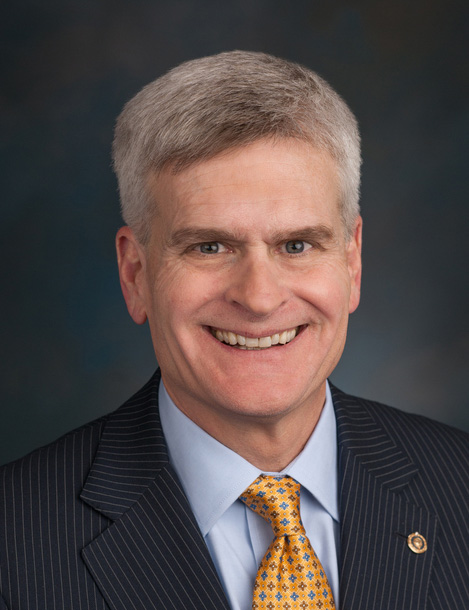 High Resolution
Bill Cassidy
William Morgan "Bill" Cassidy, M.D. is the senior U. S. Senator from the state of Louisiana and serves on the Health Education Labor & Pensions (HELP), Energy and Natural Resources, Finance, Veterans Affairs and Joint Economic Committees, and he previously served as the U.S. Representative for Louisiana's 6th Congressional District. He received a B.S. in 1979 from Louisiana State University and his M.D. from LSU School of Medicine in 1983, and as a physician he specialized in the treatment of diseases of the liver at the Earl K. Long Medical Center.
Read Full Bio

In 1998, Dr. Cassidy helped found the Greater Baton Rouge Community Clinic to provide uninsured residents of the greater Baton Rouge area with access to free health care. He has also been involved in setting up the nonprofit Health Centers in Schools, which vaccinates children in the East Baton Rouge Parish School System against Hepatitis B and flu.

In May 2009, then Congressman Cassidy partnered with California Representative Jackie Speier to introduce legislation that would amend the House of Representatives rules to require that members of Congress list their earmark requests on their Congressional websites. Previous earmark reform efforts had focused on disclosure of earmarks that were funded by Congress. In June 2010, he introduced the Gulf Coast Jobs Preservation Act to terminate the moratorium on deep water drilling and require the Secretary of the Interior to ensure the safety of deep water drilling operations. He worked to ensure that money from the Gulf Coast Restoration Trust Fund, which was established in the wake of the BP oil spill, is spent on coastal restoration efforts.

In December 2010, Cassidy voted to extend the tax cuts enacted during the administration of President George W. Bush. He voted for the Constitutional Balanced Budget Amendment of 2011. In May 2013, Cassidy introduced the Energy Consumers Relief Act of 2013 (H.R. 1582) to require the Environmental Protection Agency (EPA) to submit reports to both the United States Congress and the United States Department of Energy regarding proposed regulation that would have significant compliance costs (an impact of over $1 billion). The Department of Energy and Congress would then have the option of stopping or altering the EPA proposal.

Cassidy was a vocal opponent of the Patient Protection and Affordable Care Act (Obamacare or the Affordable Care Act), arguing that it would fail to lower costs and give too much decision-making authority to the federal government. In September 2014, the House passed the Employee Health Care Protection Act of 2013 (H.R. 3522; 113th Congress), sponsored by Cassidy, enabling Americans to keep health insurance policies that do not meet all of the Affordable Care Act's requirements.

Cassidy supported the Lowering Gasoline Prices to Fuel an America That Works Act of 2014 (H.R. 4899; 113th Congress), a bill to revise existing laws regarding the development of oil and gas resources on the Outer Continental Shelf. The bill is intended to increase domestic energy production and lower gas prices. He argued that the bill "would allow us to take advantage of our natural resources and expands our energy manufacturing and construction industries."

Cassidy ran for the U.S. Senate in the 2014 election, in which he was endorsed by Republican Senator David Vitter. He defeated three-term incumbent Democratic Senator Mary Landrieu in the run-off election held on Saturday, December 6, 2014, receiving 56% of the vote to Landrieu's 44%. It was the first Republican victory for the seat since William P. Kellogg in 1883.

Articles
Replacing Obamacare and Insuring the Uninsured
Executive Summary Feb. 13, 2017
How We Can Repeal the ACA and Still Insure the Uninsured
Commentary Jan. 20, 2017