←  ABOUT US
About
›
Person Detail
Charles H. Townes 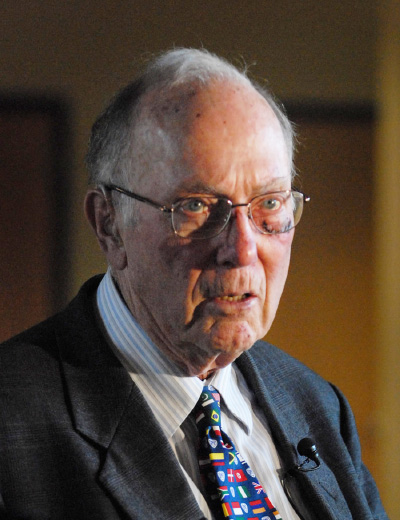 Charles H. Townes (1915–2015) was Professor in the Graduate School and Space Sciences Laboratory, University of California at Berkeley and a member of the Board of Advisors for the Center on Culture and Civil Society at the Independent Institute. He received his Ph.D. in physics from California Institute of Technology, and he received the Nobel Prize Laureate in Physics for his work on the theory and application of the maser quantum electronics connected with both maser and laser devices.

Professor Townes was Professor of Physics and Executive Director of the Columbia Radiation Laboratory at Columbia University; Member of the National Academy of Sciences; Foreign Member of the Russian Academy of Sciences; Vice President and Director of Research of the Institute for Defense Analyses; Provost and Professor of Physics at the Massachusetts Institute of Technology; University Professor at the University of California; Guggenheim Fellow at the University of Paris; Fulbright Lecturer at the University of Tokyo; National Lecturer for Sigma Xi; Director of the Enrico Fermi International School of Physics in Italy; Vice Chairman of the Science Advisory Committee to the President of the U.S.; Chairman of the Advisory Committee for the first human landing on the moon; Chairman of the Defense Department’s Committee on the MX missile; and a member of the boards of directors for General Motors Corporation and Perkins Elmer Corporation.

He was also a recipient of the Templeton Prize on Progress in Religion; David Sarnoff Electronics Award; Rumford Medal from the American Academy of Arts and Sciences; John Carty Award from the National Academy of Science; Young Medal and Prize; Niels Bohr International Medal; National Medal of Science; Frederic Ives Medal; Lomonosov Medal by the Russian Academy of Sciences; Telluride Tech Festival Award of Technology; Vannevar Bush Award for Lifetime Contributions and Statesmanship to Science; and Honorary Doctorate of Humane Letters from the University of Redlands.

Professor Townes's books include Making Waves, How the Laser Happened: Adventures of a Scientist, and Microwave Spectroscopy (with A.L. Schawlow).