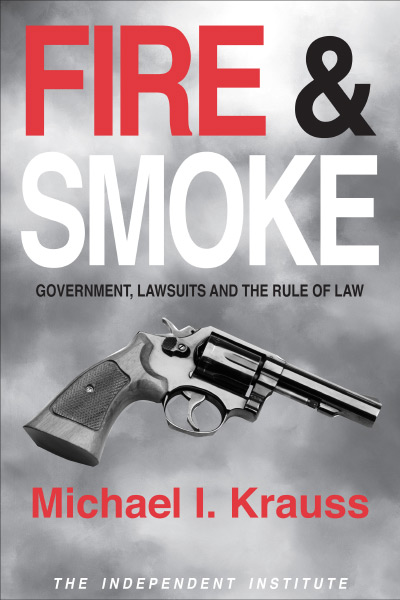 Fire and Smoke
Government, Lawsuits and the Rule of Law
Michael I. Krauss (Author)

The state of Mississippi’s lawsuit against tobacco companies in 1994 was quickly emulated by more than a dozen other states and then the federal government. Not to be outdone, more than a dozen cities and the federal government have followed the City of New Orleans’s lead and sued gun manufacturers. Do these lawsuits signal new directions for more effective public policy or a new and dangerous trend whereby governments use tort law to achieve public policy objectives they were unable to accomplish legislatively?

In this new policy report, so-called government “recoupment” lawsuits are carefully examined and found to be flagrant abuses of the constitutional separation of powers, seriously undermining over two hundred years of common-law torts adjudication.

Author Michael Krauss, a leading legal scholar on the relationship between tort law and personal freedoms, systematically dissects the tobacco and firearm recoupment lawsuits. He shows how such lawsuits betray every criterion of sound, effective, and just tort law. The lawsuits against gun manufacturers can show no damages, no proximate causation, and no wrongdoing. Similarly, governments have no direct damages to claim against tobacco manufacturers and cannot legally stand in the place of individual smokers or their families.

Fire & Smoke concludes that recoupment lawsuits are incompatible with civil freedoms, representative democracy, and the rule of law upon which institutions of a free society depend.

“Dozens of cities have brought ‘recoupment’ lawsuits against tobacco and firearms retailers and manufacturers that boil down to blaming these defendants for the failure of gun laws to reduce crime. The lower courts have rightly been throwing these suits out, although the threat of an outrageous jury verdict forced some to settle. Fire & Smoke is the excellent and timely new study of these recoupment suits. Legal scholar Michael Krauss explains why such litigation is unfounded and is a serious threat to the rule of law and the foundations of our constitutional liberties.”
—Don B. Kates, Jr., constitutional scholar and author

“Politicians, lawyers, assorted rascals and do-gooders are rapidly undermining our common-law rules of torts, while the rest of us either applaud their efforts or are indifferent. Michael Krauss demonstrates how the attack on tort law is a serious threat to our liberties in his book, Fire & Smoke.”
—Walter E. Williams, Professor of Economics, George Mason University

“Fire & Smoke is a well-written and accessible critique of the recent government lawsuits against the tobacco and firearms industries. Professor Krauss’s contribution is two-fold. First, Krauss briefly explains the key distinction between public and private law. Krauss then proceeds to his second point: The government recoupment litigation against the firearms and tobacco industries is flawed as matters of both law and public policy. He cogently explains both the big picture of why this litigation is a threat to liberty and the specific legal and policy flaws of each lawsuit. For any friend of liberty who wants to learn more about this subject, Krauss offers one of the best starts available.”
—William H. Pryor, Jr., Judge, U.S. Court of Appeals for the Eleventh Circuit; former Attorney General, State of Alabama

Hazardous to Our Health?