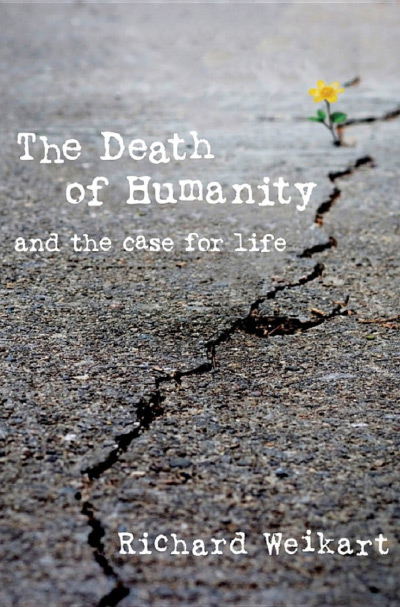 The Death of Humanity and the Case for Life
By Richard Weikart
Kindle Hardcover Audiobook
This book review is a web exclusive for the Winter 2017/18 issue of The Independent Review.

Are humans intrinsically valuable or just a cosmic accident without meaning or purpose? Richard Weikart’s The Death of Humanity and the Case for Life examines thinkers who select the second answer to this question—showing that at best their theories lead to hopeless contradictions and that at worse their ideas sign humanity’s death warrant.

The mere asking of the question shows how important it is but the historical unanimity favoring the first choice has eroded during the modern era with devastating consequences including genocide, abortion, infanticide, suicide and the inaptly-named euthanasia. Weikart (a history professor at California State University, Stanislaus) begins by reviewing disturbing ideas such as ecologist Eric Pianka’s speech suggesting that it would be beneficial if ninety percent of the world’s human population were wiped out by a virus; Peter Singer’s advocacy of a parental right to kill newborn children and justifications for killing people with disabilities; and the horrors of Nazi death camps (Weikart is the author of Hitler’s Ethic: The Nazi Pursuit of Evolutionary Progress, New York: Palgrave Macmillan, 2009). He quotes Holocaust survivor Viktor Frankl’s conclusion that “the gas chambers of Auschwitz, Treblinka, and Maidanek were ultimately prepared not in some Ministry or other in Berlin, but rather at the desks and in the lecture halls of nihilistic scientists and philosophers” (p. 12) and accordingly, his focus is on intellectuals and their ideas.

Weikart identifies six sets of ideas that have fatally misdiagnosed the human condition: 1) we are nothing more than machines, 2) we are nothing more than animals, 3) we are controlled by our genes, 4) we are controlled by our environment, 5) pleasure is the only thing that matters, and 6) the common man is contemptible (while the “superman” isn’t). Insightful chapter-length examinations of these errors make up the heart of the volume.

One of the joys of reading this book is that Weikart is so adept at identifying these wayward intellectuals’ deep contradictions and allowing their own words to show the shallowness and inconsistencies of their thought. The first chapter, “Man the Machine,” demonstrates this well exploring figures such as Auguste Comte, whose logical positivism holds that the only sound knowledge available to humankind is from science grounded in observation. But can science give sound knowledge of what is good and what is evil? Logical positivists, Weikart points out “despaired of discovering a scientific morality, so they pretended that morality was purely subjective. ‘Thou shalt not kill’ was a personal opinion, they claimed, equivalent to ‘I don’t like broccoli’” (p. 33). Bertrand Russell is portrayed with poignancy. He held that man “is the product of causes which had no prevision of the end they were achieving; that his origin, his growth, his hopes and fears, his loves and his beliefs, are but the outcomes of accidental collocations of atoms” (p. 36). Could he and did he lead his life as if he believed this? Unfortunately, he was a supporter of eugenics. But fortunately he couldn’t bring himself to act as if people are just “collocations of atoms.” His daughter’s memoir described him as a “passionate moralist” who would have made a good saint in a more religious age. If he were asked about free will when writing philosophically, he would give a resounding “no.” However, “he acted ‘yes’ and wrote ‘yes’ when his moral passions were engaged” (p. 39). Russell suffered an immense tension in his life because of his core view of humanity, writing that “The sea, the stars, the night wind in waste places, mean more to me than even the human beings I love best” (p. 40) and that “The centre of me is always and eternally a terrible pain—a curious wild pain—a searching for something beyond what the world contains, something transfigured and infinite—the beatific vision—God—I do not find it, I do not think it can be found ... it’s like a passionate love for a ghost” (p. 41).

Chapter two shows the descent of men who embraced Darwinian ideas, such as jurist Oliver Wendell Holmes. In the infamous Buck v. Bell (1927) ruling, the much celebrated Holmes, who had pledged to uphold the Constitution, gave the Supreme Court’s imprimatur to the legal practice of sterilizing those deemed unfit to reproduce. His reasoning was crude Darwinism. The brutal struggle for existence validated, as he put it in private correspondence, “substitut[ing] artificial selection for natural by putting to death the inadequate” and “kill[ing] everyone below the standard” (p. 76).

Weikart incisively enters the “nature versus nurture” controversy by pointing out that it is a false dichotomy which entirely ignores the reality of free will. He traces these deterministic ideas back to Baruch Spinoza, who even denied God free will. Yet, the idea that “my genes made me do it” currently dominates whole branches of the social sciences—perhaps because the human will and its freedom isn’t something scientists are good at measuring. Instead they turn to ideas from biologists like E.O. Wilson who pronounced that “Ethics as we understand it is an illusion fobbed off on us by our genes to get us to co-operate” (p. 109) and mused that “When the [twentieth] century began, people could still easily think of themselves as transcendent beings ... Now most or all of the relevant evidence from science points in the opposite direction: that, having been born into the natural world and evolved there step by step across millions of years, we are bound to the rest of life in our ecology, our physiology, and even our spirit” (p. 109-10). Except that the “science” cannot say anything about one’s “spirit” and most people still think of themselves as transcendent beings. Wilson asserts that it is good that we are completely alone in the universe, with no destiny or purpose assigned us, because this makes us completely free. Unfortunately, this is freedom from morality.

If one’s environment determines everything, it gives those who can control the environment immense power, which—Weikart ably shows—they immediately abuse if only they suspect that this is true. Prime exhibits are Lenin, Trotsky and Stalin. But the abuse can be much closer to home. The psychologist John B. Watson came from a long line of environmental determinists who thought they could reinvent parenting. Apparently, his science overlooked the surest route to parental success—loving your children, treating them as ends unto themselves. Somehow, manipulating his own children and treating them as raw material was supposed to make them well-adjusted. It didn’t.

The creepiest chapter of the book may be “The Love of Pleasure,” which begins with the Marquis de Sade giving “a black eye to the hedonistic impulse of the Enlightenment in the same way that the Great Terror provided a warning to those enthusiastic about the French Revolution” (p. 162). Hedonism reduces humans to pleasure-seeking animals and in equating pain with moral evil, turns attention from actual evil and destroys lives by directing them toward a pale vision of ultimate flourishing. But even the ideas of more respectable hedonists such as Jeremy Bentham—a proponent of infanticide—take a dark turn, as Weikart demonstrates.

Finally, there are the existentialists and those, like Friedrich Nietzsche, who turn conventional morality on its head by declaring evil to be good. Jean-Paul Sartre explained that existentialism “is nothing else than an attempt to draw all the consequences of a coherent atheistic position” (p. 199) and concluded that “Everything is indeed permitted if God does not exist” (p. 201). Weikart points out the conundrum. Everything is permitted. Except Sartre rightly damned fascism and other evils, so he really meant that not everything is permitted. This summarizes the essential message of Weikart’s book. All six of these ways of thinking try to be scientific and systematic, but they all lead to the position that there is no real basis for morality, so everything goes. But no one (expect an Übermensch like Nietzsche, who suffered mental illness) can actually live this way. Although they can be seduced by these ideas, real people—even intellectuals—just don’t have the heart to live this way.

Where does all of this materialism—the belief that there is nothing beyond the physical materials of the universe—lead? It can drive people to suicidal thoughts. Weikart notes that Michel Foucault (who makes repeated appearances in the final two chapters) proclaimed that “one should work on one’s suicide throughout one’s life” (p. 205). It can and does lead to opinions like those of Judith Thomson. Her “A Defense of Abortion” argued that even if a fetus has a right to life, the woman’s right to her own body trumps the fetus’s right to life, since the unborn baby is basically an intruder assaulting its mother. Nonetheless, real mothers throughout the ages have known deep down that babies are meant to be cherished and nurtured—even if they are a burden.

Malcolm Muggeridge explained that “If there was no God, nor any transcendental purpose in the experience of living in this world, then a human being’s life [would be] no more intrinsically sacred than is that of a broiler-house chicken, which, if it stops laying eggs, or is otherwise incapacitated, no longer rates its allowance of chicken feed and has it neck wrung” (p. 282). When most people, including Muggeridge, ponder this thought, they shudder and then lift up their eyes in gratitude that man bears the image of something much greater than a chicken. But the intellectuals discussed in The Death of Humanity shudder (or shrug) and then begin to peck for grubs in the soil. Richard Weikart has done us the service of plucking these birds, exposing their naked folly.