Here, in no particular order, are just a few:

Zuckerberg also intimated that Facebook’s security challenges are never-ending. “Observers could be forgiven for believing that their Facebook data is never secure and that the billionaire boss is most careful to guard confidentially when he is collaborating with government investigators,” Billingsley concludes.

Last week’s U.S.-led air strikes on Syrian targets were supposed to diminish but not fully eliminate the Assad regime’s chemical weapons capability, according to analysts such as Lori Esposito Murray at the Council on Foreign Relations. The strikes, and whatever response comes from Bashar al-Assad (or his allies Russia and Iran), may complicate the timetable for President Trump’s plan to withdraw the 2,000 or so American troops sent there to help destroy the militant Islamist insurgency of ISIS.

The U.S. is close to seeing the defeat of ISIS in Syria—good fortune that led Trump to suspend a $200 million stabilization fund for that war-torn country. But the American foreign-policy establishment has been campaigning fiercely for a U.S. policy of “staying the course”—the purpose of which is subject to change, reports Independent Institute Senior Fellow Ivan Eland in a piece for The Hill.

“Moreover, with his new hardline national security team—national security adviser John Bolton and Secretary of State Mike Pompeo—withdrawal from the civil war in Syria will be that much less likely,” Eland writes. “Trump’s desire to get out of Syria is a glimmer of hope in this otherwise dismal outlook, but even that may be quashed by the U.S. foreign policy establishment.” Trump’s “Mission Accomplished” tweet, in other words, may succumb to a more daunting power: mission creep.

Withdrawal from Syria Would Be Unusual Bright Spot for American Foreign Policy, by Ivan Eland (The Hill, 4/12/18)

3) Some Clouds Lifting on Tax Day

April 17 marks the deadline for filing your 2017 U.S. and state tax returns—but you already knew that. It also marks Tax Freedom Day, the date when one’s 2018 tax liability could theoretically be covered by earnings made thus far this year. To help calm frayed nerves, Independent Institute Senior Fellow and Research Director William F. Shughart II offers a soothing headline in the Washington Times: For Many, Tax Day Will Be a Bit Less Gloomy.

The main reason is that last December’s tax legislation—the Tax Cuts and Jobs Act—will reduce the tax liability for most households and businesses. Already, some workers are seeing less federal tax withholding from their paychecks. On the corporate tax side, the permanent reduction of income tax rates to 21 percent, along with several other provisions, will likely lead to a faster growing economic pie for all (or for most) to consume.

Still, there is much work to be done. The tax cuts for households need to be made permanent, as does the larger standard deduction. Most of all, federal spending needs to be scaled back so the country isn’t driven over a fiscal cliff. To help end the debt crisis, Congress and the White House should also look into the liquidation of federal assets. 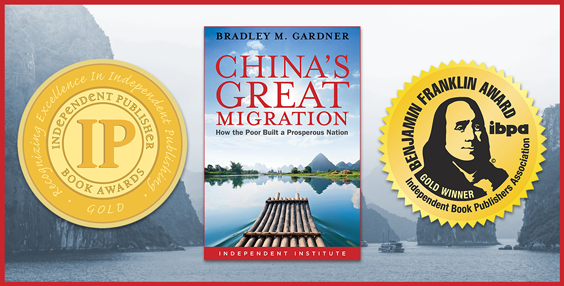 To cap off this week’s downbeat analysis, we’re delighted to share some good news. China’s Great Migration: How the Poor Built a Prosperous Nation by Independent Institute Research Fellow Bradley M. Gardner, a former East Asia correspondent for The Economist who has since become a Foreign Service Officer at the U.S. State Department, just won two prestigious awards in the independent book-publishing industry. (See here for more news about the book.)

Last week, China’s Great Migration was awarded the IPPY Gold Medal for Best Book in Political/Economic/Foreign Affairs (awarded by Independent Publisher) and the esteemed Benjamin Franklin Award for Best Book in Political/Current Events (awarded by the Independent Book Publishers Association). Independent Institute Founder and President David J. Theroux called this “the best winning combination we’ve ever had for one of our books.”