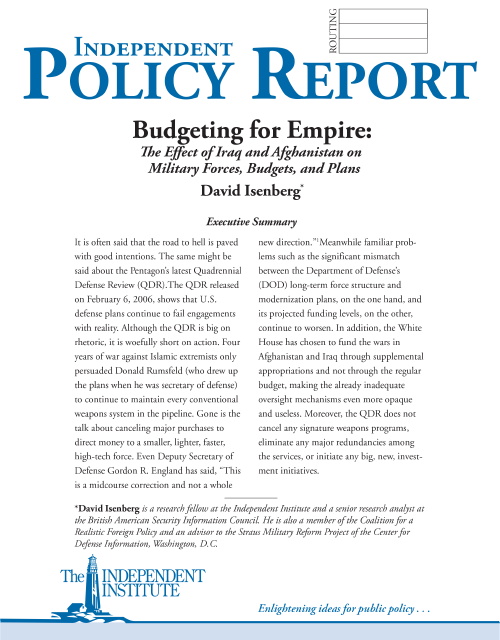 It is often said that the road to hell is paved with good intentions. The same might be said about the Pentagon’s latest Quadrennial Defense Review (QDR).The QDR released on February 6, 2006, shows that U.S. defense plans continue to fail engagements with reality. Although the QDR is big on rhetoric, it is woefully short on action. Four years of war against Islamic extremists only persuaded Donald Rumsfeld (who drew up the plans when he was secretary of defense) to continue to maintain every conventional weapons system in the pipeline. Gone is the talk about canceling major purchases to direct money to a smaller, lighter, faster, high-tech force. Even Deputy Secretary of Defense Gordon R. England has said, “This is a midcourse correction and not a whole new direction.” Meanwhile familiar problems such as the significant mismatch between the Department of Defense’s (DOD) long-term force structure and modernization plans, on the one hand, and its projected funding levels, on the other, continue to worsen. In addition, the White House has chosen to fund the wars in Afghanistan and Iraq through supplemental appropriations and not through the regular budget, making the already inadequate oversight mechanisms even more opaque and useless. Moreover, the QDR does not cancel any signature weapons programs, eliminate any major redundancies among the services, or initiate any big, new, investment initiatives.

David Isenberg is a Research Fellow at the Independent Institute and an advisor to the Straus Military Reform Project of the Center for Defense Information.
AfghanistanDefense and Foreign PolicyDefense BudgetIraqTerrorism and Homeland Security