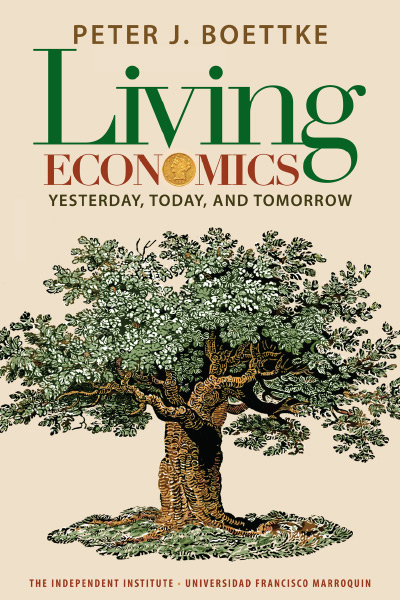 Economics suffers from a bad reputation as a “dismal science” plagued with lifeless graphs and dry statistics. In reality, this accusation has less to do with substance than with style; the subject itself is lively and vital. Economics provides a powerful framework for understanding what goes on in the marketplace, the voting booth, the family, the community, and every other sphere of social activity; indeed, the application (or misapplication) of its principles shapes the fate of nations. The greatest teachers of economics—from before Adam Smith on down to the present—have always impressed upon the public their discipline’s explanatory powers and importance for human well-being.

In Living Economics: Yesterday, Today, and Tomorrow, Peter J. Boettke contributes to this tradition by discussing the ideas of some of the most important economists of the past century—famous and not so famous “worldly philosophers” whose innovative theories shed light on pressing issues such as inflation and unemployment, capitalism and socialism, competition and entrepreneurship, law and politics, and customs and civil society. He also explains how the conduct of economists, both in classrooms and in scholarly journals written for their peers, enhances or diminishes the influence of economic thinking on the world of practical affairs.

Boettke’s thorough diagnosis of the maladies of today’s economics profession is especially valuable. He concludes by urging his colleagues to return to their discipline’s original mission: to make sense of human action and communicate the findings to a public sorely in need of cogent counsel. Scholarly and yet highly accessible, Living Economics enables readers to see far across the human landscape by standing on the shoulders of giants in the economics profession, as Boettke and his occasional chapter co-authors—Christopher Coyne, Steve Horwitz, Peter Leeson, David L. Prychitko, and Frederic Sautet—eagerly acknowledge. Its sparkling insights make it worthwhile reading for economics teachers, students, and anyone interested in exploring the frontiers of the economic way of thinking and their potential impact on the world.

Part I examines the aim and methods of economic education. F. A. Hayek said that the task of economics was to teach people how little they knew about what they imagined they could design. He and other great economists, from Adam Smith to James Buchanan, have emphasized the unplanned or “spontaneous” aspects of the private-property market economy, especially self-regulation via the adjustment of relative prices and the profit and loss calculus. This may seem like simple economics, but it is not simple-minded economics.

Making this the theme of principles courses would be immensely helpful for teaching students core concepts such as thinking on the margin; opportunity cost; the gains from specialization, trade, and innovation; and the requirements of wealth creation. It would be vastly superior to teaching a watered-down version of Ph.D. classes or emphasizing market failure as if that were the essential characteristic of a market economy. Even at higher levels of economic study, “spontaneous order” is an invaluable unifying concept—one that suggests rewarding approaches to numerous research topics for the graduate student pursuing an academic career. This is one of many suggestions that Boettke has for grad students.

Part II, the heart of the book, examines the teachings of more than a dozen economists who exemplify excellence. Boettke begins with Hans Sennholz, his undergraduate professor at Grove City College, whose public engagement on topical issues such as inflation, unemployment, and monetary reform was animated by a passionate advocacy of a free society. “To those students who were open, Sennholz’s message was transformative,” Boettke writes.

Like Sennholz, Murray Rothbard, another early influence on Boettke, embraced the Austrian school of economics and wrote volumes on a wide variety of theoretical, historical, and policy concerns. His unjustly overlooked writings on the Soviet economy help answer a puzzling question: If central planning is very inefficient, why didn’t the Soviet economy collapse sooner? Boettke explains how he utilized Rothbard’s insights in his own works about the Soviet economy.

Kenneth Boulding is seldom mentioned in conjunction with Austrian economics—one reason is that he was a veritable school unto himself—but he shared the radical subjectivism of the Austrians, as is evident throughout the nearly 40 books and hundreds of articles he wrote on topics as diverse as capital theory, war and peace, and social evolution. Boettke encourages young scholars to excavate the goldmine that is Boulding’s theoretical corpus.

Next Boettke examines the works of economists who enlarged the domain of the profession by applying economic thinking to the political realm. The late Warren Samuels emphasized the importance of political and legal institutions in shaping economic activity. His correspondence with James M. Buchanan about a legal case involving apple growers illustrates fascinating differences in their respective approaches.

Gordon Tullock, Buchanan’s early co-author and co-developer of public choice theory, has used economic thinking to illuminate political phenomena such as logrolling, voter motives, and rent seeking. To do this effectively he had to overcome interesting theoretical challenges, such as the need to identify filtering signals and equilibrating processes that differ from those common to commercial transactions, Boettke explains.

Public choice analysis usually emphasizes the institutional sources of conflict in collective decision-making. In contrast, the work of Vincent and Elinor Ostrom emphasizes the roots of cooperation in the non-market arena. By shedding light on the underpinnings of civil society, they aim to cultivate citizens that have the capacity for self-governance, Boettke explains.

During his short but productive life, Don Lavoie applied his creative mind to a diverse range of topics, including central planning, the history of economic thought, and computer science. Some Austrian economists deemed his work on the philosophy of the social sciences heretical, but Boettke suggests that it fits squarely within their tradition.

Although a sociologist rather than an economist, Peter Berger has a lot to offer the “dismal science.” Thomas Mayer confirms this in an economics book apparently patterned after Berger’s bestseller, An Invitation to Sociology. Both works captivate the reader by explaining mysteries of everyday life that most people are content to leave unanswered, Boettke explains.

Ludwig von Mises, the unofficial dean of the Austrian school in the twentieth century, was as controversial for his stance on economic methodology as he was for his advocacy of laissez-faire. Among other “heresies,” he held that basic theorizing must precede empirical analysis because facts don’t “speak for themselves”; the relevant facts must be selected and interpreted, and those steps rely on valid principles. Mises’s thoroughgoing defense of methodological apriorism confronts the claims of positivism but avoids the epistemological abyss of postmodernism, Boettke contends.

Mises also argued that the market isn’t so much a place as it is a process, one that entails risk-taking, economizing, and constant change. His pupil Israel Kirzner has developed this idea further, arguing that the changeless “general equilibrium” models of neoclassical theory ignore, rather than explain, the most vital aspects of real-world markets, such as rivalrous competition and entrepreneurial discovery.

F. A. Hayek, the most famous economist to follow in Mises’s footsteps, is celebrated widely for his work on knowledge and social coordination, but he also wrote extensively about the political economy of freedom. These topics are not unrelated: Hayek’s critique of socialism reflects his view of how markets use knowledge and create benefits far greater than anyone had intended.

James M. Buchanan shares many of Hayek’s views but has taken political economy in a new direction. It can be framed as follows: Economics is about a game played within rules, but how are those rules determined? Buchanan’s answer dispels romantic notions about politics, but its realism has fostered a fruitful sub-discipline within public choice: constitutional political economy.

The Practice of Economics

Although the economics profession continues to shed light on the way the world works, the mainstream began to drift off course starting in the early twentieth century, Boettke argues in Part III.

Where did economics go wrong? Modern economics took flight from reality as mathematical formalism gained ascendency, especially after the publication of Paul Samuelson’s Foundations of Economics (1947). Abetting this trend were the tacit assumption of “man as machine” and a corollary: the belief that economic prosperity was an “engineering problem” best dealt with by strong doses of Keynesian demand management and cost-benefit analysis, each treatment to be administered by the high priests of the Keynesian-neoclassical orthodoxy. Ironically, economics and political economy were well equipped to guard against such hubris, as Adam Smith and F. A. Hayek explained.

Fortunately, a counter-trend against what Hayek called “constructive rationalism” and what Smith called “the man of systems” is underway. An emphasis on real-world economic problems is making a comeback, and the limitations of policy activism are better understood. The timing is propitious. “The fate of humanity,” Boettke writes, “will turn on the ability of those within the mainline of economics to beat back economic ignorance, special interest politics, and the hubristic ambitions of the man of systems.”