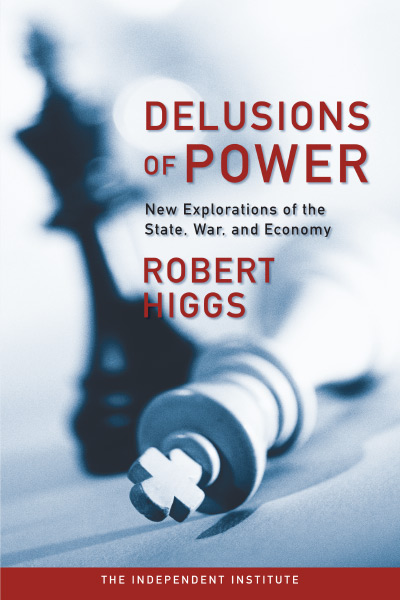 Why has the U.S. government become a growing threat to the civil and economic liberties of ordinary Americans? Does the nation suffer from a lack of democracy or have we deluded ourselves into believing that democratic institutions can deliver more than they actually can? Is contemporary democracy the best political system for securing the blessings of liberty—or should we search for better alternatives to government as we know it?

In Delusions of Power: New Explorations of the State, War, and Economy, economist and historian Robert Higgs offers penetrating insights about fundamental issues surrounding democracy and the legitimacy of the state, as well as fresh observations about the turning points in American history during the past century: the world wars and the Cold War; the post-9/11 national-security state; and major economic calamities, including the financial crisis of the 2000s.

For the growing number of readers already familiar with Robert Higgs’s intellectual rigor, elegant erudition, and morally grounded wit, Delusions of Power offers predictably rewarding fare. For readers new to Higgs’s works, this collection of self-contained essays and book reviews will provide new vistas from which to see the world with greater clarity. Higgs explains why many common assumptions about the U.S. government are false and dangerous. Moreover, he shows that seeing through the delusions of power is not only necessary if we are to foster a more humane world, but also a rewarding endeavor in its own right.

The State, Democracy, and Crisis Policymaking

The legitimacy of government as we know it and the factors that sustain such government are the focus of Part I. In chapter 1, Higgs casts doubt on James Madison’s conviction that the U.S. Constitution can maintain effective “checks and balances” to prevent government abuses. Friends of liberty, Higgs argues, would do well to pursue stateless alternatives to the elusive ideal of limited government. In addition, such a reexamination is morally urgent, he suggests in chapter 2, because the common arguments put forth to justify government as we know it run parallel to the specious arguments once used to justify slavery.

Although thinkers across the centuries have warned that democracy tends toward mob rule, Higgs notes in chapter 3 that democracy is also beset with a different problem: once elected rulers take office, the democratic system itself cannot help the people to bring rulers to account until the next election, by which time the outcomes of their bad decisions may be irreversible, as U.S. entry into each of the world wars shows. Moreover, election ballots rarely offer voters worthy alternatives, he argues in chapter 4.

Nothing promotes the growth of the state as much as wars and economic crises. Chapter 5 illustrates this thesis by examining the U.S. government’s response to the 9/11 terrorist attacks. Chapter 6 examines a dozen dangerous presumptions characteristic of governments’ responses to crises. Chapter 7 explains why crises create opportunities that political actors inside and outside the government seek to exploit. Those who are quick to support unnecessary wars typically pay lip service to war’s horrors, but then support fighting anyway. In chapter 8, Higgs examines fourteen different rationales prefaced by “War is horrible, but . . . ”

Part II looks more closely at key players and events that have transformed the U.S. government. Chapter 9 examines the influence of “Colonel” Edward M. House and the role he played in Woodrow Wilson’s decision to take the United States into World War I.

The next three chapters look at lesserknown aspects of World War II. Chapter 10 examines the role of U.S. trade sanctions in provoking Japan’s decision to attack Pearl Harbor. Chapter 11 explains why most Americans are ignorant about the events that led to U.S. involvement in the war. Chapter 12 describes the wartime origins of modern income-tax withholding.

Chapter 13 sheds light on the U.S. economy during the Great Depression and World War II by examining an often overlooked variable: total hours worked. This approach not only refutes the myth that the New Deal brought about quick or full economic recovery, but also shows that the increase in real output during the war was actually much less “miraculous” than generally claimed.

Since the 1960s, domestic programs have been hyped intermittently with all the fervor of a military campaign. Chapter 14 illuminates the role that professional economists played in creating the ideological and political climate in which President Lyndon Johnson’s “War on Poverty” and Great Society programs took place. Chapter 15 considers Nixon’s New Economic Plan and the harm it caused.

Part III examines the U.S. government’s recent economic policies, its stance on national security and war-making, and its tendency toward overreaction during and after national crises. Chapter 16 exposes six major mistakes of the current orthodoxy about financial crises and economic recessions—errors about aggregation, relative prices, the rate of interest, capital and its structure, malinvestments and money pumping, and regime uncertainty.

Several chapters then examine the political economy of U.S. national security policy. Chapter 17 examines the hidden costs of U.S. war-making, a subject about which most Americans unwisely defer to the judgments of politicians and the national-security establishment.

Chapter 18 illuminates presidential decisions to wage war and resolves the paradox of why presidents have led Americans into wars against nations that posed no existential threat to the United States.

Chapter 19 analyzes the reciprocal corruption of the government and the defense industry. Although the proximate cause of the continual scandals in defense contracting is the absence of proper accounting procedures at the Pentagon, a deeper cause is the U.S. government’s huge geopolitical ambitions, Higgs concludes.

Chapter 20 looks at how major U.S. neoimperialist wars end. National leaders choose war or peace based on their perceived interests, Higgs argues, and those perceptions can change with changes in public attitudes toward a war’s mounting human and economic costs, as happened during the Korean and Vietnam wars.

Policymakers’ responses to the financial crisis that came to a head in September 2008 have led to another surge in the government’s size, scope, and power. Chapter 21 examines the plethora of ad hoc policies—products of frightened overreactions—adopted by politicians and regulators with little grasp of economic reality.

Review of the Troops

What do contemporary scholars make of Leviathan? In Part IV, Higgs reviews seven recent books related to the modern state and its accretion of power. The first is Sheldon D. Pollack’s War, Revenue, and State Building: Financing the Development of the American State. Pollack shows that war is often the precursor of the welfare state because war gives rise to new funding mechanisms that augment national treasuries. Oddly, although he recognizes the predatory origins of the state, he views the U.S. government as a benign “protection racket” (his term).

Franklin D. Roosevelt’s presidency has received a wave of scholarly criticism in recent years, including New Deal or Raw Deal? How FDR’s Economic Legacy Has Damaged America, by Burton Folsom Jr., a work that Higgs lauds for its focus on the New Deal’s partisan political nature and its harmful effects on the U.S. economy.

Next, Higgs reviews Patrick J. Buchanan’s Churchill, Hitler, and “the Unnecessary War”: How Britain Lost Its Empire and the West Lost the World. Buchanan’s reputation as an ideological polemicist should not dissuade readers from coming to terms with his bold and carefully argued thesis: that Britain’s declaration of war against Germany in 1914 turned European wars into world wars and made possible the evils of Lenin, Stalin, Hitler, and the Holocaust.

Higgs also has mostly kind words for The Pearl Harbor Myth: Rethinking the Unthinkable, by George Victor, an account of Roosevelt’s stealthy campaign to provoke Japan to attack the United States and thereby draw the nation into the war in Europe “through the back door.” A diary entry written by Secretary of War Henry Stimson is but one piece of the evidence of Roosevelt’s deceit.

In 1961, President Eisenhower warned the nation about “the acquisition of unwarranted influence, whether sought or unsought, by the military-industrial complex.” The development of that concept is the subject of James Ledbetter’s Unwarranted Influence: Dwight D. Eisenhower and the Military-Industrial Complex. Higgs shares Ledbetter’s conclusion that meaningful reform of the U.S. government’s symbiotic relationship with the defense industry is unlikely as long as Uncle Sam seeks involvement in most of the world’s disputes.

Another source of mischief in defense spending is the belief suggested by the title of Vernon W. Ruttan’s book Is War Necessary for Economic Growth? Military Procurement and Technology Development, a work Higgs criticizes for its dubious inferences.

One book that offers clarity on U.S. foreign policy is Christopher J. Coyne’s After War: The Political Economy of Exporting Democracy. Coyne explains why national reconstruction usually fails, especially in countries that seem to need it the most. His use of new economic tools, his rigorous empirical analysis, and his clear, dispassionate presentation illuminate a critical subject and make his book a worthy model for other scholars, Higgs concludes.

In Magic and Mayhem: The Delusions of American Foreign Policy from Korea to Afghanistan, Derek Leebaert maintains that U.S. leaders have carried out reckless adventurism abroad in large part because they are have been deluded by grandiose nostrums and “magical thinking” that grossly exaggerate their ability to effect positive change. Leebaert argues forcefully that these delusions have enabled politically astute operatives (“emergency men”) to craft hasty policy responses to crises, but, according to Higgs, he too often he fails to consider that a quest for political power and personal aggrandizement is also at work.