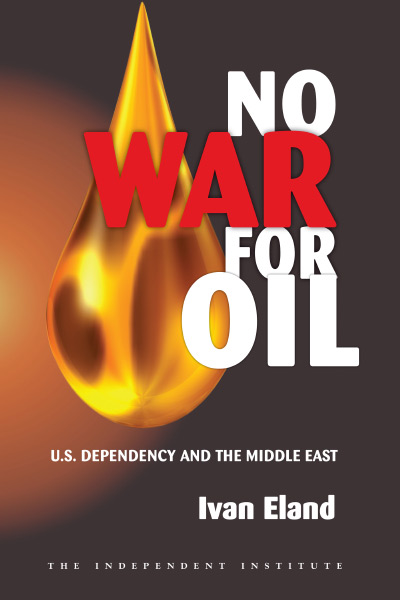 Oil has a bloody history. The ghost of petroleum often hovers in the background of military conflicts—even of wars fought ostensibly to secure the blessings of liberty and democracy.

In No War for Oil: U.S. Dependency and the Middle East, foreign-policy analyst Ivan Eland (Senior Fellow, The Independent Institute) examines the troubled legacy of wars and military actions undertaken to secure access to oil, and reaches a conclusion profoundly at odds with the conventional thinking about oil and economic security: contrary to the beliefs shared by the architects of U.S. foreign policy for most of the past century, ensuring the free flow of oil to the United States does not require U.S. military protection of the world’s oil-rich regions. Markets alone can be relied upon to supply oil to Americans, just as markets are used to provide paying customers with food, industrial equipment, microprocessors, and other valued products.

Eland begins with a look at the fascinating history of the world’s most contested commodity. Oil, he shows, has rested under the surface of more military conflicts than most people realize. Eland then exposes the myths about oil that have mislead policymakers and the public into believing that the projection of military power abroad is essential to safeguard access to vital oil supplies. Rather than enhance U.S. national security and economic well being, the brandishing of U.S. military power in the Persian Gulf has undermined genuine American economic and political interests, he argues. In his concluding section, Eland distills the implications of his analysis for U.S. foreign policy and offers guidelines aimed at better serving the American people.

Readers of No War for Oil will come away with a solid understanding of the flaws in conventional thinking—unexamined nostrums shared by liberals and conservatives alike—about oil security and the U.S. military presence in the Persian Gulf. Even readers who remain skeptical of Eland’s unorthodox but well-supported conclusions will better grasp the folly of taking at face value policymakers’ suggestions that the American people must be willing to go to war in the Middle East in order to maintain a high standard of living.

The choice is not whether to prepare to fight oil wars or to risk losing energy resources that power the American economy—that’s a false alternative, Eland shows. Rather, the choice is whether or not to continue to devote increasingly costly resources to military and diplomatic policies that are both unnecessary and detrimental to the economic and political interests of the American people.

A History of Oil and Military Power

Part I chronicles the tribulations of one the most contested commodities in world history—a tale that becomes one of international intrigue, not when the first oil well was struck near Titusville, Pennsylvania, in 1859, but after oil was discovered in Persia in 1908 and the Middle East soon became a chessboard for competing foreign powers.

When World War I and the Russian Revolution disrupted oil supplies in the Old World, governments scurried to find new sources of oil—by then a commodity viewed as “strategic” in importance—much to the neglect of rubber and other critical raw materials. Britain sought to expand its oil supplies from Iran, Iraq, and Kuwait; France from Kuwait; the United States from the Persian Gulf; and Japan from the Dutch East Indies.

During World War I, the United States supplied up to 80 percent of the allies’ petroleum, but a high wartime demand, coupled with price controls, led to oil shortages and fears of imminent depletion of world supplies.

Oil played a role in the prelude to World War II. The debate in Japan over whether to go to war with the United States centered on the longer-term availability of oil for the Japanese military, which the United States was trying to cut off in response to Japan’s invasion of China. Like Imperial Japan, Nazi Germany sought to conquer oil lands rather than purchase petroleum on the open market. Securing oil supplies became a top wartime goal of all countries involved in the conflict—again, often to the neglect of other vital raw materials.

In 1945, President Roosevelt reached an agreement with King Abdul Aziz of Saudi Arabia of lasting significance: the kingdom would give the United States access to oil in exchange for military assistance. Shapers of postwar U.S. foreign policy argued that the United States should import more foreign oil rather than use domestic supplies that would be relied upon if war broke out again. The Soviets’ delay in leaving Iran in 1946 added to cold-war tensions and gave a sense of urgency to the military protection of foreign oil supplies.

Eland shows that U.S. foreign policy in the postwar era had profound impact on subsequent events. The 1973 oil crisis, the Iranian Revolution in 1979, the Carter Doctrine, European dependence on Soviet energy, the Iran-Iraq War, and the U.S.-Iraq Wars—all were shaped by long-held assumptions that formed in the early decades of the twentieth century. Many of those assumptions, however, were wrong.

In Part II, Eland identifies and rebuts eleven influential myths about the market for oil. Some myths reflect the belief that various government subsidies and OPEC policies prevent oil markets from operating effectively. Although plausible, this viewpoint vastly underestimates the power of the profit motive to guide the production and distribution of oil. It also ignores numerous Federal Trade Commission investigations that have failed to prove collusion among domestic oil companies.

Other myths result from a failure toexamine the best available evidence. For example, credible evidence indicates that the world’s oil reserves are growing. The Strategic Petroleum Reserve, an unnecessary relic of the Cold War mindset, is another example of a program based on something other than a close examination of the evidence.

One misconception easily refuted is the idea that a country must possess “special” access to oil in order to advance economically. Postwar Japan and Europe (especially Germany), and more recently the Asian Tigers, decisively refute this belief. Unfortunately, America’s oil-related obsessions with Saudi Arabia and Russia indicate the pervasiveness and sway of this myth and others.

Is military power necessary for securing access to oil? Part III examines the belief that the free flow of oil from the Persian Gulf warrants protection from the U.S. military.

Two dubious assumptions underlie the “military necessity” doctrine, according to Eland. The first is that oil is of special “strategic” importance to the U.S. economy. In reality, oil is no more vital than many other goods and services that we rely exclusive on markets to provide.

The second is that a spike in oil prices or a disruption of oil supplies during a crisis would pose a grave threat to the U.S. economy. Eland, however, argues that the global oil market would quickly alleviate major supply disruptions, even those resulting from targeted economic embargoes: markets would see to it that the supply disruptions were dissipated around the world, resulting merely in higher prices, not mass shortages.

Eland also addresses other oil-related U.S. national security concerns. These include worries that U.S. dependence on foreign oil necessarily leads to unsavory alliances and undermines democracy abroad; anxieties that unfriendly petro-states use oil revenues to fund anti-U.S. terrorism; and fears that a scarcity of oil will lead to more conflicts. Most scenarios that would depict a threat derived from foreign oil evaporate under close scrutiny.

Eland concludes this section by examining scenarios involving threats to oil. These include “what if ” questions such as the conquest of oil reserves by an unfriendly powerful nation; reductions in oil supplies from war, internal upheaval, or unfriendly suppliers; political instability in oil-rich regions, especially the Persian Gulf; future production cutbacks or oil embargos by the oil cartel; Iranian blockage of the Straits of Hormuz; and China’s newfound interest in gaining oil supplies for its burgeoning economy. Under each scenario, Eland argues, U.S. military protection of oil undermines American economic interests.

Having debunked many myths about oil markets and corrected misperceptions about U.S. national security, Eland concludes No War for Oil by offering broad guidelines for U.S. policymakers. Among those principles are the following:

Reducing or eliminating the U.S. military presence in the Persian Gulf could provide relief for American taxpayers at a time when the economic burdens of empire are increasingly apparent. More importantly, military retrenchment could save American lives by avoiding unnecessary military outputs and campaigns and thereby dissipate the emotional fuel that the al-Qaeda terrorist network has used to garner support from radicalized Muslim populations.

“In short, going to war for oil is unnecessary, expensive in blood and treasure, and dangerous for U.S. security,” Eland concludes.

Buy No War for Oil