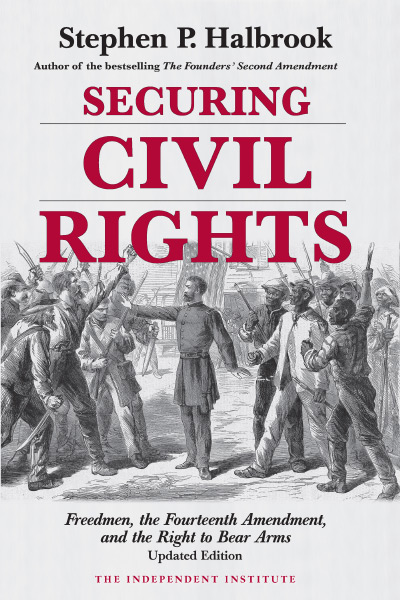 Does the U.S. Constitution’s Fourteenth Amendment, which protects the rights to personal security and personal liberty from violation by state governments, incorporate the Second Amendment, which declares that “the right of the people to keep and bear arms, shall not be infringed”? The framers of the Fourteenth Amendment believed so—as did their opponents. The Fourteenth Amendment was intended and understood to protect basic rights—above all, the right to have arms for self-defense—from infringement by state and local governments, which had passed statutes that restricted the civil liberties of former slaves in the post–Civil War South.

In Securing Civil Rights: Freedmen, the Fourteenth Amendment, and the Right to Bear Arms, noted attorney and legal scholar Stephen P. Halbrook illustrates the importance of the right to bear arms in the context of the African-American experience during Reconstruction, when the freedmen sought to exercise their Second Amendment rights to protect their newly won civil liberties from violation first by the Southern States and then by the Ku Klux Klan.

“Trusting ex-slaves to own firearms was, by any definition, the cutting edge in true belief in civil rights,” Halbrook writes. “It remains to be seen whether contemporary society will accommodate the same rights of the freedman sought to be guaranteed by the Framers of the Fourteenth Amendment.”

Although Halbrook concentrates on the right to keep and bear arms, he also includes a comprehensive analysis pertinent to the general topic of incorporation of the Bill of Rights into the Fourteenth Amendment.

Securing Civil Rights begins with a day-by-day account of congressional proceedings that led to the passage of measures meant to protect the rights of freedmen from oppressive statutes designed to reinstate slavery through the back door. Those so-called black codes had made it a crime for freedmen to testify in court, purchase real estate, travel without a work permit—and keep and bear firearms.

The weapon bans rendered freedmen incapable of protecting their personal property and security from opportunistic criminals and violent reprisals by embittered whites. Two weeks after passage of Mississippi’s statute, for example, a black private assigned to the Freedmen’s Bureau in that state reported that ex-Confederates were now disarming blacks, taking their money and possessions, “and in many places killing.”

When the report reached the halls of Congress, Republican leaders hurried to enact legislation to protect the freedmen from rights violations by the states. On December 6, 1865, Representative John Bingham introduced a joint resolution that would become the Fourteenth Amendment. A month later, Senator Lyman Thrumbull introduced a bill to enlarge the powers of the Freedmen’s Bureau and the Civil Rights Bill—two bills seen as temporary measures to affirm the right to keep and bear arms.

The Freedmen’s Bureau Act declared that “the constitutional right to bear arms” is included among the “laws and proceedings concerning personal liberty, personal security,” and property, and that “the free enjoyment of such immunities and rights” is to be protected. Every senator who voted for the Fourteenth Amendment also voted for the Freedmen’s Bureau Bills and thus for the recognition of the constitutional right to bear arms.

The right to have arms implied the right to use them for protection of one’s life, family, and home against criminals and terrorist groups of all kinds, whether attacking Klansmen or lawless “law” enforcement. To the framers of the Fourteenth Amendment, human emancipation meant the protection of this great human right from all sources of infringement, whether federal or state.

Congress Reacts to Southern Rejection of the Fourteenth Amendment

As Congress debated the Fourteenth Amendment and the second Freedmen’s Bureau Bill, Southern courts nullified the Civil Rights Act, and the Southern state militias continued to disarm the freedmen and commit other abuses. Congress reacted by disbanding the militias and requiring those states—under threat of military rule—to adopt constitutions consistent with the Fourteenth Amendment.

The records of the states make clear that contemporaries believed the amendment incorporated the Bill of Rights, especially the right to keep and bear arms, against the state governments. Opponents of the amendment argued that it was unnecessary because blacks were already protected in all rights of citizenship (which the Dred Scott decision said included keeping and bear arms) other than suffrage.

After examining Congress’s reaction to the Southern rejection of the Fourteenth Amendment, Halbrook looks at the extent to which the amendment was perceived as incorporating the Second Amendment at the constitutional conventions of twelve states: Maryland, Alabama, Louisiana, Virginia, Georgia, Arkansas, Mississippi, South Carolina, North Carolina, Florida, Texas, and Tennessee.

The Freedmen’s Bureau Act Reenacted and the Fourteenth Amendment Ratified

The 1866 Freedmen’s Bureau Act, which had a two-year life, was renewed in 1868 for an additional year. Enacted on July 6, 1868, the second Freedmen’s Bureau Act also required the Secretary of War to reestablish the Bureau in areas where it had been discontinued and where “the personal safety of freedmen shall require it.” In addition, it provided that Bureau operations would be discontinued in states that reentered the Union, unless the Secretary of War found that the Bureau’s continuation was necessary.

By passing the 1868 Act, Congress reaffirmed that the rights of personal security and personal liberty included “the constitutional right to bear arms.” On July 28, 1868, just days after enactment of the Freedmen’s Bureau legislation, it was officially proclaimed that the Fourteenth Amendment had been ratified by three-fourths of the states and was now a part of the U.S. Constitution. Congress then passed statutes repealing the prohibition of the Southern state militias.

Toward Adoption of the Civil Rights Act of 1871

To enforce the rights declared in the Fourteenth Amendment, Congress enacted the Enforcement Act of 1870 and the Civil Rights Act of 1871. The legislative histories of these Acts are saturated with expressions of the intent to protect the rights of freedmen to keep and bear arms. The Enforcement Act criminalized private-party violations of rights “granted or secured” by the Constitution, such as attacks by the Ku Klux Klan in the Southern States.

The Civil Right Act 1871, in addition to suppressing Klan violence, was designed to remedy infringement of rights under color of state law. Aside from the Fourteenth Amendment, this Act was the most important and lasting accomplishment of the Reconstruction Congress in support of civil rights and the liberation of the freedmen.

The rest of Reconstruction was consumed with the outer limits of the state action requirement of the Fourteenth Amendment, and in particular with whether the amendment made it a federal crime for private individuals to conspire to deprive freedmen of the rights to assemble and to bear arms. The drama would now shift from the halls of Congress to the federal courts.

From Klan Trials to the Cruikshank Case

After passage of the 1870 Enforcement Act, federal prosecutors began to bring indictments alleging violations of Bill of Rights freedoms and interference with the right to vote on account of race (a violation of the recently ratified Fifteenth Amendment). After federal courts in Alabama and Mississippi upheld such indictments, similar indictments were brought against members of the Ku Klux Klan in South Carolina.

Klan activity became the focus of Congressional hearings. In a typical incident, a black Georgia man testified how Klansmen broke into his house and shot him three times. In other incidents, Klansmen were indicted and convicted for having robbed blacks of their guns.

One indictment in Grant Parish, Louisiana, culminated in an 1876 Supreme Court decision that was the climax of the debate over whether private action can constitute a violation of rights guaranteed by the U.S. Constitution. The Court decided in United States v. Cruikshank that Congress had no authority to protect persons against the private infringement of the right to bear arms, which, like other local crimes, was a liberty or property interest for the states to protect.