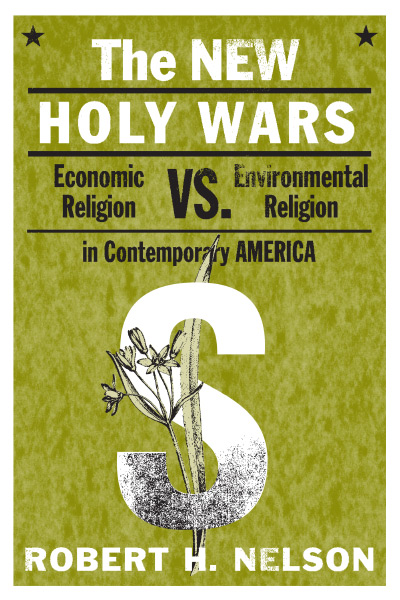 “Economics and environmentalism are types of modern religions.” So writes Independent Institute Senior Fellow Robert H. Nelson, author of The New Holy Wars: Economic Religion versus Environmental Religion in Contemporary America, an in-depth study of the origins and implications of the conflict between these two opposing belief systems.

In The New Holy Wars, Nelson probes beneath the rhetorical surface of economic and environmental religion to reveal their clashing fundamental commitments and visions. By interpreting their conflict as theological, Nelson is able to show why these creeds almost invariably talk past each other and why their conflict is likely to continue to dominate public discourse until one party or the other backs down—or unless an alternative outlook rises to challenge their influence in the public arena.

In addition, by exploring little-known corners of American intellectual history, Nelson shows how environmentalism and economics have adapted Judeo-Christian precepts in ways that make them more palatable in an age of secularism. In many cases, Nelson is able to demonstrate a direct lineage from traditional religious beliefs to tenets held by mainstream economists and environmentalists.

The False God of Economic Salvation

Part I explores the basic tenets of economic religion, highlighting its areas of disagreement with environmental religion. Economics, although it claims to be value-free, relies on value-laden assumptions that are seldom stated openly and rarely examined. These tenets are shared by competing economic religions across the spectrum, from Marxism to the Progressive economists’ “gospel of efficiency” to the neoclassical mainstream of today. Chapter 1 briefly reviews the underlying theological logic of economic religion and its large influence on government policy over the course of the twentieth century. Chapter 2 shows how economic religion has interpreted the rise of Islamic terrorism and contrasts this view with a biblical interpretation that attributes the terrorist attacks of 9/11 to the “sins” of America.

Some economists have taken to heart criticisms levied against their profession by disciples of environmental religion, and they have proposed new concepts and methods of analysis designed to incorporate environmental values within the framework of economics. Chapter 3 argues that efforts to extend the domain of economic rationality to encompass environmental religion—via the concept of “existence value”—have been theologically confused and practically unsuccessful. Chapter 4 examines how some economists have attempted to replace traditional economic judgments based on “efficiency” with new ethical standards of “sustainability”—and the large difficulties that they encountered. Chapter 5 shows how the all-out pursuit of economic progress in the twentieth century all too often ignored various types of social and environmental consequences, resulting in wide abuses in the name of a secular religion.

Part II examines the seldom-acknowledged Calvinist roots of American environmental religion. Chapter 6 shows how environmentalism revived the old Calvinist doctrine of a fundamental corruption of human nature since man’s fall from grace in the Garden of Eden. In the secular version held by environmental religion, humankind since the advent of organized agriculture has been a malignant presence in the world (“the cancer of the earth,” in the words of Earth First! co-founder Dave Foreman). Paradoxically, environmental religion views human beings as a product of nature, but views activities that come naturally to our species as unnatural.

Chapter 7 traces the religious significance of the natural world in Calvinist thought, beginning with the central role of “the Book of Nature” in John Calvin’s theology. Calvin’s message was elaborated by the influential theologian Jonathan Edwards and other Massachusetts Calvinists; it was prominently secularized for the first time in the United States in New England transcendentalism; John Muir, who founded the Sierra Club in 1892, wrote about going to nature to find God; and in the 1980s “deep ecology” reflected a powerfully renewed Calvinist outlook on the world.

The environmental movement has increasingly employed the language of protecting “the creation.” This term is not meant merely as a powerful metaphor, as Part III shows. Environmentalists experience a sense of religious reverence and awe in the presence of nature “untouched by human hand,” which is a modern equivalent of devout Christians in previous centuries encountering “the Book of Nature” as written by God at the creation.

Although biblical notions of “the creation” underlie many core doctrines of environmental religion, any explicit ties to Christian creationism are typically rejected. Chapter 8 explores how tensions such as this one have been prominent historically in the thinking of leading ecologists Frederic Clements, Aldo Leopold, Eugene Odum, and others, and how the “science” of ecology itself tells an implicit creation story. Chapter 9 examines the attempts of some environmentalists to reconcile the outwardly secular character of environmental creationism with its actual underlying Christian creationist contents.

Chapter 10 analyzes the large theological problems that arise in seeking to restore wild nature—that is, to “re-create the creation.” And Chapter 11 shows how the thinking of environmental creationism in some cases has led to ill-conceived and unjust environmental policies, as when many black Africans were evicted from their native lands in the twentieth century to protect “the creation,” as it was said to have existed until recent times in African national parks and other so-called wild areas.

The roots of libertarian thought date back at least to Adam Smith and John Locke, whose writings reflected the strong influence of Calvinism in Scotland and England. Thus, there is an “economic Calvinism” to match the “environmental Calvinism” of Part II, although it has played only a small role within the American economics profession and had a limited impact on American government policies in the twentieth century. However, the influence of a broadly Calvinist outlook in economics may grow in the twenty-first century, partly as a result of the waning faith in standard economic religion.

Part IV examines the possibility of an emerging religious synthesis that would incorporate elements of both environmental and economic Calvinism—a new “libertarian environmentalism,” as it might be called. Chapter 12 describes the Calvinist economic religion of Frank Knight, so different from that of most of his contemporaries. Chapter 13 sketches briefly a possible design for blending the thinking of economic libertarians such as Knight with the views of many environmental Calvinists.

Robert H. Nelson is Senior Fellow at the Independent Institute and Professor of Environmental Policy at the School of Public Policy of the University of Maryland. Dr. Nelson is the author of many journal articles and seven books, including Reaching for Heaven on Earth: The Theological Meaning of Economics and Economics as Religion: From Samuelson to Chicago and Beyond.