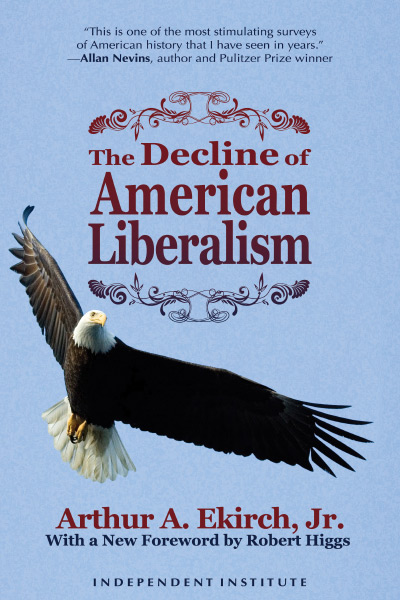 When the Declaration of Independence spoke of the rights to life, liberty and the pursuit of happiness, the Founders understood these as natural rights and saw their protection as the purpose of government. Within two centuries, however, the political philosophy that guided them—classical liberalism—had long been passé in intellectual circles, and individual liberty was in retreat from the onslaught of the welfare-warfare state. Even the term “liberalism” no longer meant what it originally stood for: maximum freedom for the individual and strong constraints on government power.

The Independent Institute is delighted to republish the landmark analysis of that trend, The Decline of American Liberalism, by renowned historian Arthur A. Ekirch, Jr., a founding member of the Institute’s Board of Advisors. First published in 1955, this powerful book has long been revered by advocates of individual liberty. The reason it has endured owes as much to Ekirch’s incisive analysis and masterful erudition as it does to the importance of the subject.

“Even now virtually every reader is sure to learn much from Ekirch’s descriptions and evaluations,” writes Independent Institute Senior Fellow Robert Higgs in his foreword to the new edition. “To my knowledge, no good substitute for The Decline of American Liberalism is available, and this new printing serves a valuable purpose by preserving and making conveniently available the great classical-liberal historian’s most important contribution to American political and intellectual history.”

The key to understanding U.S. history, according to Ekirch, is to recognize that liberalism and colonial America grew up together. Rooted in the doctrines of the Humanists of the Renaissance, the religious reforms of the Reformation, and the natural-rights philosophy of the Enlightenment, early liberalism was concerned largely with criticizing existing institutions and protecting certain fundamental individual rights from government infringement. Despite the presence of slavery and indentured servitude, liberals viewed the New World as fresh soil in which their principles for a more humane society could take root.

The American Revolution reflected liberalism’s respect for reason and individualism: its manifesto, the Declaration of Independence, appealed to world opinion that the revolution was a just cause; its conduct also showed the moderating influence of liberal ideals. Although both sides had their lapses of illiberal brutality and terror, ordinary colonists were largely able to continue their peacetime interests and pursuits. Nevertheless, anti-individualistic, anti-democratic aspects of the war disillusioned many American liberals.

The conservative reaction that followed the revolution represented a direct challenge to the liberal tradition. The Federalists consolidated power, and the war’s legacy facilitated the growth of the central government. The rise of a new business class to equip the new government, worries over the repayment of war debts, American Indians in the western frontier, discriminatory trade measures of the separate states, and Shays’s Rebellion created additional pressure for a stronger national government and a weakening of liberal policies.

Although the new Constitution exhibited liberalism in its natural-rights philosophy, enumerated and limited powers of the national government, and checks and balances to limit government abuses, it also gave government broad and far-reaching powers over the economic life of the nation, thereby setting the stage for the abandonment of laissez-faire liberalism and the substitution of a policy of economic nationalism or government paternalism. The short-lived Alien and Sedition Acts, pushed by the Federalist Party, were a further strike against liberalism.

The election of Jefferson and his followers in 1800 disrupted the Federalist agenda in the short run, but the Jeffersonian “revolution” was transient. Jefferson sought compromise between the extremes of his own radical followers and the conservative Federalists. The outbreak of new hostilities in Europe led Jefferson to adopt measures to strengthen the central government.

After his presidency Jefferson seemed to realize that the old liberal goals had been subverted by means that his party had taken over from his Federalist predecessors, but the trend toward a larger national government continued. New taxes were levied to pay for the War of 1812, a protective tariff was imposed to encourage favored industries, and pressure mounted for government to build ports, roads, and bridges.

The decades between the War of 1812 and the Civil War showed great strides in the direction of democracy, progress, and reform, but the age of Jacksonian democracy was not a bastion of old-style liberalism. Yielding to the demands of the proslavery South and western expansion, the Jacksonians found themselves supporting the suppression of free speech and free thought and justifying the manifest destiny of the nation at the expense of the rights of Indians and Mexicans.

The Civil War and Its Aftermath

Slavery was the greatest single factor in the decline of nineteenth-century American liberalism. Although many of the Founders expected slavery to die out, it achieved a new vitality in the early 1800s.

The North and South had clashed over differing political and economic interests, and their rivalry for control of the West worsened those tensions. What began as a war over secession led to the defeat of slavery. “And yet, in almost all other respects, the Civil War was to occasion a setback for traditional liberal values,” writes Ekirch.

Civil liberties were dealt a harsh blow: Lincoln’s administration suspended the writ of habeas corpus, arrested and confined war critics and southern sympathizers, confiscated private property used to aid the Confederacy, and imposed censorship and conscription. In the name of liberal values, the North had undermined them. This was the essential tragedy of the war, according to Ekirch.

During Reconstruction, ill will and obstructionism prevailed on both sides, as victorious Northerners resorted to force and military occupation, and embittered Southerners employed extremist and extralegal means to impede African Americans.

Later, a Populist backlash against the emergence of “big business,” often a result of government favoritism, signaled another departure from liberalism. Moreover, a new nationalistic political theory arose to keep pace with the reconstituted Union. In place of Locke and other proponents of natural rights and compact theories of government, American thinkers turned to German philosophers who glorified the role of the state.

Reformers and intellectuals of the late nineteenth-century looked to Bismark’s Germany and England’s Fabian Socialists for ideas. Society, they argued, should be based not on individualism but on a collectivist, or nationalized, political and social order. Although they considered themselves “liberal,” their divergence from classical liberalism was profound, spawning a progressive “crusader” movement in domestic and international affairs. Only a handful of old liberals stood out against the forces of nationalism engendered by the times.

Advocates of U.S. entry into World War I hoped to extend their crusade for progressive democratic ideals to a war-torn and reactionary Europe. America’s fight for “liberal” ideals abroad, however, undermined liberty at home. Soon after U.S. entry, Congress, at the Wilson’s urging, passed legislation enacting conscription, establishing an official propaganda office, and suppressing any opposition or dissent. Business leaders were enlisted to oversee government control of the economy.

Although the post-war climate was one of disillusionment with the war, classical liberal ideals remained dormant. Dissidents were prosecuted, immigration was curtailed, and subsidies and protectionism for big business continued. Prohibition gained momentum.

The legacy of the progressives continued long after their official demise: the policies and rhetoric of the New Deal borrowed from Wilson’s New Freedom and Teddy Roosevelt’s Square Deal. Although the courts struck down some of FDR’s programs, intellectual momentum favored federal encroachment in economic matters to achieve collectivist ends.

New Deal economic planning was easily diverted from peace to war. Conservative businessmen who opposed spending for domestic reform went along with spending for military purposes. During World War II the interment of Japanese Americans, the suppression of dissidents and conscientious objectors, and an extensive system of rationing and price controls ensured that civil and economic liberties would not be spared in the federal government’s quest for control.

After the war a few key developments helped transform the erstwhile republic into what political scientist Harold Lasswell called “the garrison state,” such as the creation of the National Security Council and unprecedented peacetime funding of a large military. The merging of big government and big business under the concept of a permanent war economy created a new danger to the individual and a new threat to liberalism.

Tensions generated by the cold war and the accompanying militarization of the American economy brought a new series of attacks upon traditional civil liberties. Whereas existing laws were adequate to prosecute genuine criminal conspiracies, the era’s national loyalty oaths, Congressional investigations, and the official registration of organizations deemed subversive created political criminals of those found or presumed guilty by association. As Ekirch puts it, “To the danger of the garrison state there was added the new threat of a police state, with its grim portent for American liberalism.”

In his preface to the 1966 edition, Ekirch acknowledged that certain advances had been made since the book was first published—notably in regard to civil rights for African Americans. Nevertheless, he believed his major thesis remained valid. Government-granted freedoms bestowed for membership in a group, he argued, are no substitute for natural rights, a concept long absent from public discourse.

“Individual freedom,” Ekirch writes, “continues to be threatened by the forces of nationalism and war—and the resultant concentration of ever greater powers in the institutions of the modern state and its corporate adjuncts.”

Arthur A. Ekirch Jr., Ph.D., (1915-2000) was a leading scholar of American intellectual history and professor emeritus of history at the State University of New York (SUNY) at Albany. Dr. Ekirch was the author of ten books, including The Civilian and the Military.

Buy The Decline of American Liberalism