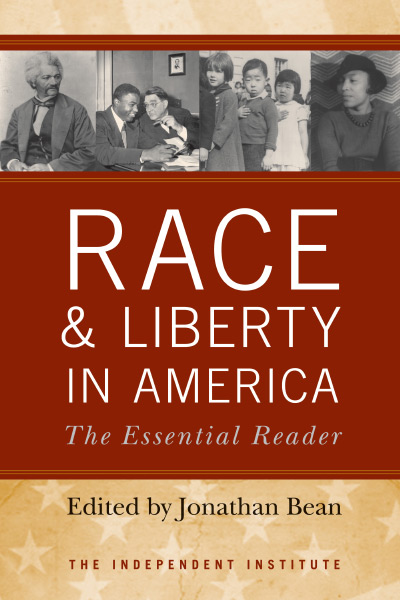 From 1776 until well into the twentieth century, classical liberals led the struggle for racial freedom. They fought slavery, lynching, segregation, and racial distinctions in the law unwaveringly and on moral grounds. As immigration advocates, they defended the “natural right” of migration to America. Unfortunately, partly because classical liberalism does not ﬁt under the contemporary labels of “liberal” or “conservative,” almost all books on civil rights have neglected its contributions.

Race & Liberty in America: The Essential Reader, edited by Jonathan Bean, corrects this deﬁciency by assembling the ﬁrst collection of writings that chronicle the classical liberal legacy of civil rights. With 100 short documents dealing with race and immigration, along with commentary to carry the story across the centuries, Race & Liberty in America recaptures a lively tradition that continues to inﬂuence debates over race and immigration.

Although classical liberals have been overlooked by almost all histories of civil rights in the United States, many of their beliefs are still widely embraced. As Jonathan Bean writes in his introduction, “Classical liberals espoused values shared by many other Americans: ‘unalienable Rights’ from God, individual freedom from government control, the Constitution as a guarantor of freedom, colorblind law, and capitalism.”

Chapter 1 examines the early antislavery movement. Classical liberal voices drew upon the Constitution, Christianity, and a belief in the right to self-ownership. The Declaration of Independence was a touchstone quoted and discussed by Frederick Douglass, James Forten, David Walker, and Lysander Spooner. William Leggett defended the right of a free press to criticize slavery.

Throughout this period, classical liberal Christians found themselves ﬁghting the proslavery interpretations of Christianity advanced by southerners. Evangelical abolitionists Beriah Green and Lewis Tappan, among others, invoked the concept that “all men are . . . endowed by their Creator with certain unalienable Rights, [and] that among these are Life, Liberty, and the Pursuit of Happiness.” Inﬂuential British abolitionist William Wilberforce, in his antislavery campaign, appealed to Christian notions of moral dignity.

With the electoral success of the Republican Party, many classical liberals joined because of its opposition to slavery. Republicans, including Abraham Lincoln, declared slavery to be immoral yet confined the political issue to whether slaves ought to exist in the territories of the United States. This expediency disillusioned classical liberals, who hoped for a ﬁrmer stance against slavery. Frederick Douglass and Lysander Spooner also criticized Lincoln for not embracing emancipation at the outset of the Civil War.

Frederick Douglass summed up the political position of African Americans: “For colored men the Republican Party is the deck—all outside is the sea.” Chapter 2 concludes with documents and testimony regarding the Ku Klux Klan’s campaign of violence and intimidation against blacks for voting against the Democratic Party during Reconstruction.

The Roaring Twenties were an ugly period in race relations. The Ku Klux Klan revived in new form, attacking not only blacks but also Catholics, Jews, and immigrants. By the mid1920s, the KKK had millions of members before disintegrating in the midst of scandal and counterattacks by opponents.

This was an era of paradox and pragmatism. House Republicans passed an anti-lynching bill, but a Democratic ﬁlibuster blocked its passage in the Senate. President Warren Harding spoke courageously against racism, but Democratic victories in Congress limited his power to do more. President Calvin Coolidge signed the Quota Act, which shut down immigration for decades to come. Yet, Coolidge challenged the KKK and other nativist forces by espousing a classical liberal philosophy of civil rights in “controversial” venues, such as Howard University, the leading historically black college. As secretary of commerce, Herbert Hoover desegregated his agency’s workforce and, as late as 1932, when Hoover ran for reelection, most black voters supported his GOP ticket.

With southern Democrats critical to his New Deal agenda, Roosevelt remained silent on race and refused to back anti-lynching bills or other nondiscrimination measures. Despite FDR’s silence, most African Americans voted for the Democratic Party because it offered jobs to desperate people. However, classical liberals were far more critical of Roosevelt’s record. The documents in chapter 5 highlight their critique of state-sponsored discrimination, including Japanese internment.

Those featured in this chapter include Oscar De Priest (R-Ill.), the first black elected to Congress in the 20th century; Hamilton Fish III (R-NY), arguably one of the most important civil rights advocates in Congress from the 1920s to the 1940s; noted columnists Rose Wilder Lane and H. L. Mencken; and newspaper publisher R. C. Hoiles.

Events moved swiftly in the postwar era. Federal courts ruled segregation unconstitutional. A Republican Senate refused to seat a notorious racist, and Congress passed voting rights laws. President Dwight D. Eisenhower played an instrumental role in the desegregation of Washington, D.C. (1953) and the Brown v. Board decision (1954). Eisenhower antagonized southern Democrats with his judicial appointments, and his use of troops to enforce a federal court order desegregating public schools. Later, as the inﬂuence of Martin Luther King, Jr., spread, President Lyndon B. Johnson moved with the times to sign the Civil Rights Act of 1964, a bill passed by a bipartisan congressional coalition over the opposition of southern Democrats.

The struggle for racial freedom played out in sports. Branch Rickey, an anti–New Deal Republican, integrated baseball by signing Jackie Robinson to the Brooklyn Dodgers. Rickey’s speech explaining why he signed Robinson is an inspiring exposition of the classical liberal creed. In another document, H.L. Mencken used his newspaper column to savage the “relics of Ku Kluxry” that prohibited blacks and whites from playing tennis together on public courts.

Individualists in an Age of Group Discrimination (1965–present)

Classical liberals confronted a dilemma with the Civil Rights Act of 1964: they accepted provisions striking down state-sponsored discrimination. However, two sections prohibited discrimination in private business. This infringed upon the freedom of association that classical liberals also valued. They also feared that these sections would allow the government to discriminate in favor of preferred minorities. To allay such fears, sponsors added explicit “colorblind” language to emphasize individual, not group rights.

The move toward “group rights” began under Democratic president Lyndon Johnson, but solidiﬁed under Republican Richard M. Nixon. The Democratic Party soon saw the political beneﬁts of supporting preferences for Democratic constituencies (blacks, Hispanics, and others). The GOP establishment condoned race preferences and abandoned its classical liberal followers more often than not. Nevertheless, by taking their case to the public, classical liberals made the case for nondiscrimination.

A new generation of writers argued that individuals, not groups, need a “hand up,” and better they get it from civil society (family, church, professional associations) than from a government that views them as symbols of group stereotypes. This theme resonates in the writing of Stephen L. Carter, Stanley Crouch, Shelby Steele, Clarence Thomas, Ben Wattenberg, and others.

In the Age of Obama, what is the outlook for classical liberal policies on race and immigration? The ﬁnal chapter suggests that this question is not easily answered.

On the one hand, the major political parties have shied away from an individualistic stance on race: whereas the Democrats have embraced racial preferences in the name of “diversity,” the Republicans seem embarrassed by questions of race and wish they would go away. Except for waves of nativist concern over immigration, however, Congress has been reluctant to address racial controversies. The U.S. Supreme Court has furthered muddled the direction of civil rights jurisprudence by splitting sharply in the 2003 landmark cases, Grutter and Gratz.

On the other hand, racial intermarriage and immigration may reduce calls for group-based discrimination. Moreover, the possibility of a revival of the individualistic ethos cannot be dismissed. As the men and women whose words comprise this book have shown, classical liberals have overcome greater obstacles than those they currently face.

Jonathan Bean is a Research Fellow at the Independent Institute and Professor of History at Southern Illinois University. He received his Ph.D. from the Ohio State University in 1994 and he has taught at Juniata College and St. Michael’s College. Professor Bean is the recipient of the Henry Adams Prize for Best Book of the Year from the Society for History in the Federal Government and Herman E. Krooss Prize from the Business History Conference. He is a member of the Academic Hall of Fame at St. Michael’s College.