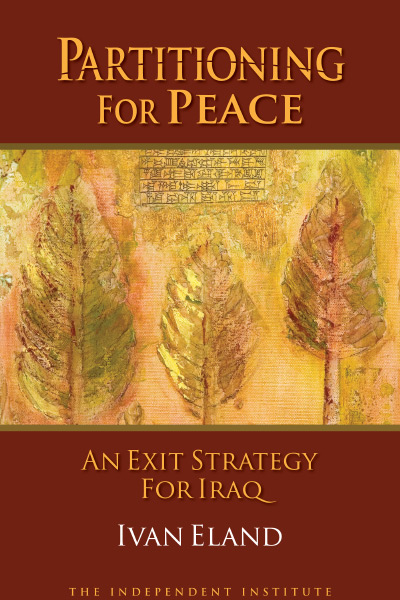 In Partitioning for Peace: An Exit Strategy for Iraq, Ivan Eland (Director and Senior Fellow, Center on Peace & Liberty, The Independent Institute) offers a practical strategy for extricating U.S. armed forces from the quagmire of Mesopotamia. Such an undertaking may be trickier than it seems: an ill-conceived withdrawal, some analysts claim, would create a power vacuum that could spark a civil war and possibly lead to the return of U.S. troops to Iraq.

How might that outcome be avoided? The first step, Eland argues, is to recognize that Iraq’s historically antagonistic religious and ethnic groups fear that if one group dominates the central government, it will exercise its power to the detriment of the others. The best option, therefore, is for Iraqis to create a decentralized form of government and to delegate to the national government only a few basic functions, such as conduct­ing foreign policy and ensuring free trade between regions.

In some respects this process began after the fall of Saddam: Iraq moved toward a de facto partition as Arab Sunnis, Shi’a, and Kurds were forced to flee their neighbor­hoods and to seek strength in numbers. But this unratified partition is dangerous, Eland argues. A formal decentralization—de jure as well as de facto—could provide greater stabil­ity and reduce the likelihood of a renewal of violence. Many observers are skeptical that such an arrangement could work, but Eland argues forcefully that partitioning represents the best hope for post-occupation Iraq—if it is done correctly.

After examining Iraq’s tumultuous his­tory and the conditions that make it ripe for renewed civil strife, Eland offers fifteen historically based guidelines that must be heeded if Iraq is to become stable, peaceful, and secure.

The History of a Fractured Land

Partitioning for Peace begins with a review of the turbulent political history that char­acterized Mesopotamia from before the time of Ottoman rule up to the U.S. occupation. One recurring theme has profound implications for the future of Iraq: historically, the society was too fractured for centralized government—except when it was ruled by an iron first.

Mesopotamia lacked a cohesive political culture even before the Ottoman Turks con­quered it during the Safavid Persian Empire in 1536. The Ottomans’ piecemeal efforts to strengthen and standardize the rule of their empire led only to more political and social fragmentation in Mesopotamia. Ultimately they had to rely on decentralized methods, governing the land through regional leaders or tribal chiefs.

Iraq has been a country only since the British, after World War I, artificially drew lines on a map and combined three disjointed former provinces of the defeated Ottoman Empire—Mosul, Baghdad, and Basra—into the new League of Nations–mandated British protectorate of Mesopotamia (the name Iraq evolved later).

In 1919 and 1920, the year the mandate was assigned to Britain, all of Iraq erupted in revolt, especially the Kurds and Shi’i tribes. The British occupiers, having too few forces to fight the fragmented rebel groups on the ground, responded to insurgent attacks by burning villages and crops and indiscrimi­nately bombing civilian areas.

The 1930s marked a turning point of sorts: Britain signed the Anglo-Iraqi Treaty, allowing oil-rich Iraq to become a quasi-independent country in exchange for military bases and transit rights. That decade also saw the birth of Iraqi authoritarians who used armed forces to hold together the three disparate and fractious areas artificially in one country, a pattern that endured until the overthrow of Saddam Hussein.

Eland writes: “All of these historical forces in Iraq have played a role in shaping the current argumentative milieu after an invasion by a foreign occupier (the United States) smashed the brutal dictatorial rule that had traditionally held the country together—from local rulers during the Ot­toman Empire, through British colonial rule, to post-British Iraqi strongmen, including Saddam Hussein.”

The Current Instability in Iraq

The U.S. decision to invade Iraq in 2003 ignored the serious complications that Iraqi disunity would impose during a post-war occupation—a problem that experts an­ticipated before the war. Supporters of the invasion stated that governing post-Saddam Iraq would be comparable to the postwar occupation of Nazi Germany and Imperial Japan. In reality, the factors that enabled the Allies to administer those two countries after their defeat were absent from Iraq.

The problem of disunity presents a ma­jor obstacle to the viability of a centralized Iraq. Insurgent groups appear to fight not only because they wish to rid the country of a foreign invader (Islamic doctrine calls for all Muslims to engage in “defensive jihad” whenever a Muslim country is attacked by a non-Muslim country), but they also fight because they believe doing so will help them establish a place in post-occupation Iraq.

These problems are masked by the drop in violence that occurred after the U.S. troop surge began in 2007 which was largely caused by buying off Sunni insurgent groups and reaching a fragile truce with Shi’i militias. Nevertheless, long-standing grievances and suspicions between Sunnis, Shi’a, and Kurds remain and are likely to intensify if corrective measures are not undertaken.

Above all, such measures must recognize that restructuring Iraq at the point of a gun will not work. Guerilla warfare is often a los­ing game for a foreign occupier and usually for a divided government that is propped up by a foreign power.

The Best Alternatives: Partition or Confederation

Reducing violence for the long term requires that Iraqis convene a constitutional conven­tion with representation from each of the country’s regions, tribes, and ethnic and sectarian groups, and without the taint of Western interference, which would under­mine its perceived legitimacy.

The outcome of such a convention would likely be some form of decentralized government—a partition, confederation, or combination of the two.

Under a confederation, Iraq’s central government would have less power than the component states, which would be ruled autonomously by Kurds, Arab Sunnis, and Shi’a, and possibly have additional, nar­rower ethnic and tribal divisions. The central government might decide only matters of economic policy, leaving the states to decide potentially divisive issues such as policing, defense, foreign policy, and social policy. A secession clause would discourage the central government from growing too large and powerful.

The longer it takes to establish a viable Iraqi central government, the more likely that a partition will result. Some critics fear that if Iraq were partitioned, the new countries would not be viable and/or that neighboring countries would intervene in their affairs. Eland addresses these criticisms and notes that the critics have not offered a better alternative.

“Permitting Iraq to have self-determination—and likely a decentralized form of governance, or even complete partition—is not a perfect solution, but it is very probably the best way out of what has become an ill-advised military adventure,” writes Eland.

If left uncorrected, Iraq’s de facto partition will likely lead to territorial disputes and fears of large minorities caught on the wrong side of the dividing lines—culminating in an all-out multisided civil war. To prevent this from occurring, new boundaries must be drawn and ratified by all ethno-sectarian and tribal groups.

How should this be brought about? The twentieth century’s partitions and secessions—some successful, some dismal failures—offer important lessons that might bring lasting peace to Iraq. Eland discusses fifteen of them.

“The most important lesson of past par­titions is that all parties must be in agreement with the partition or conflict will result,” writes Eland.

The failure to heed that lesson contrib­uted to the Israeli-Arab conflict, the invasion of Poland by Nazi Germany, and violence between Muslims and Sikhs on the Indian subcontinent. Fortunately, in the case of Iraq, each group would have incentives to favor a partition if they believed the outcome would be effective and equitable.

Boundaries must avoid stranding large minorities on the “wrong” side. Northern Ireland was long plagued by violence partly because Ireland’s partitioning in 1921 left a large Catholic minority among the Protestant majority in the north. To solve the security dilemma posed by mixed demography, it is not necessary for every member of an ethno-sectarian group to live behind the same divid­ing line: if only a small minority remains on the other side, the majority population will not feel threatened and the prospects for peace are greatly enhanced.

Population movements must be voluntary and secure. Even with the best-drawn bor­ders, some population movements may be necessary. To encourage groups of people to move, the Iraqi government or some other entity could offer them monetary incentives. Security of passage established by an inter­national peacekeeping force could eliminate the possibility of widespread violence such as occurred during the partition of the Indian subcontinent in 1947.

Powerful neighbors must participate in the partition process. When Bosnia was par­titioned, the leaders of neighboring Serbia and Croatia were wisely brought into the negotiation of the Dayton Agreement. In the case of Iraq, surrounding countries with stakes in an Iraqi partition—Jordan, Saudi Arabia, Turkey, Syria, and Iran—should be included in the negotiations. This would greatly reduce the prospect of a partition causing international conflict.

According to Eland, the Shi’i-Kurd govern­ment has no incentive to reconcile with the Sunnis. This could change should the United States announce a full and rapid withdrawal of all foreign troops by a certain date.

This announcement must be highly credible so that Iraqis would believe that not quickly creating the necessary institutions would have the gravest consequences for their society.

Eland writes: “If that stark reality fails to persuade the Iraqis to reach a partition deal, the United States should rest assured that it has done all it could to stabilize Iraq, that a full-blown civil war is now inevitable, and that U.S. forces should not remain in the middle of it. In other words, the United States should then make good on the threat to withdraw its forces rapidly.”

Ivan Eland is recognized as one of the leading experts in U.S. defense studies and foreign policy. He is Senior Fellow and Director of the Center on Peace and Liberty at the Independent Institute. He resides in Washington, D.C.