Buy Good Money
Good MoneyBirmingham Button Makers, the Royal Mint, and the Beginnings of Modern Coinage, 1775-1821
By George A. Selgin
Foreword by Charles A. E. Goodhart 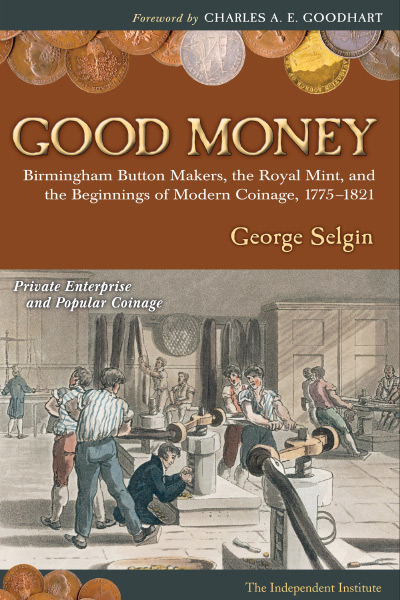 In Good Money, George Selgin (BB&T Professor of Free Market Thought at West Virginia University; Research Fellow, The Independent Institute) tells the story of a fascinating and important yet almost unknown episode in the history of money—British manufacturers’ challenge to the Crown’s monopoly on coinage.

In the 1780s, when the Industrial Revolution was gathering momentum, the Royal Mint failed to produce enough small denomination coinage for factory owners to pay their workers. As the currency shortage threatened to derail industrial progress, manufacturers began to mint custom-made coins, called “tradesman’s tokens.” Rapidly gaining wide acceptance, these tokens served as the nation’s most popular currency for wages and retail sales until 1817, when the Crown outlawed all moneys except its own.

Good Money not only examines the crucial role of private coinage in fueling Great Britain’s Industrial Revolution, but also challenges beliefs upon which all modern government-currency monopolies rest. It thereby sheds light on contemporary private-sector alternatives to government-issued money, such as digital monies, cash cards, electronic funds transfer, and (outside of the United States) spontaneous “dollarization.”

A Dearth of Good Coin

The prologue that opens Good Money takes readers to the Welsh island of Anglesey, in the summer of 1787, where a copper miner is handed his weekly earnings only to find that they consist, not of official coins, but mainly of coins minted by his boss. They are called Parys Mine Druids, and they are only the first of many such private copper coins to come, which will supply the bulk of Great Britain’s small change for the next, crucial decade of its Industrial Revolution.

Chapter One, “Britain’s Big Problem,” explains why Great Britain’s official eighteenth-century coinage arrangements weren’t capable of supporting the needs of an industrial economy. The chapter reviews the flawed policies that caused the Royal Mint to suspend copper coin production altogether while reducing silver coinage to a mere trickle. It also recalls employers’ desperate efforts, legal and illegal, to get around the coin shortage, and how those efforts backfired by leaving workers feeling more exploited than ever.

The next chapter, “Druids, Willeys, and Beehives,” introduces Great Britain’s pioneer commercial coin makers and issuers, including Thomas “Copper King” Williams (who made the Parys Mine Druids), “Iron” John Wilkinson, and “Lunar Man” Matthew Boulton—three leading figures in Great Britain’s Industrial Revolution. It explores their true motives for getting involved in coining. (Boulton, for one, was hardly the altruistic anti-counterfeiting crusader most other authorities have made him out to be.) It also tells the rather sad story of John Westwood, one of the lesser-known private coinage pioneers.

“Soho!” tells the story of Matthew Boulton’s celebrated Soho factory and mint. When it was completed in 1789 the Soho mint (actually the first of several Soho mints) was the most sophisticated and costly mint in the world—far more sophisticated and costly than any government mint. Boulton, who was something of a megalomaniac, built it in anticipation of coining for the government, but ended up having to wait ten agonizing years before getting permission. In the meantime, he became a major producer of commercial coins.

Late in 1797 Matthew Boulton finally managed to land his long-hoped-for regal coining contract, a story told in chapter five, “The Boulton Copper.” Once Boulton gained his contract, other private coiners withdrew from the business, fearing that the government was now likely to suppress their coins. Although the official copper coins Boulton produced were better than the old regal copper coinage had been, and were produced in large numbers, in many respects they proved less effective at addressing the coin shortage than commercial coins had been.

Eventually Boulton took part in the reform of the Royal Mint, equipping a brand new mint building with his steam-powered coining equipment. By doing so, Boulton unwittingly contributed to his own mint’s demise, because contrary to his expectations the government reneged on its promise to let him go on supplying British copper coin.

Despite all the Boulton copper and the new steam-powered mint at its disposal, the government still hadn’t learned how to avoid coin shortages, which grew serious again after 1810. Private coin makers and issuers once more entered the fray—the government had not bothered legally to suppress private tokens after all. During this renewal of private coinage, described in Chapter Six, “Their Last Bow,” private coin issuers, taking advantage of a precedent set by the Bank of England, took to issuing silver as well as copper coins. John Berkeley Monck, a prominent citizen of Reading, was even so bold as to issue his own gold tokens, provoking the Prime Minister, Spencer Perceval, to take steps to put an end, not only to Monck’s gold tokens, but to all private coinage.

The campaign to stamp out private coins is the subject of chapter seven, “Prerogative Regained.” Despite an outcry from merchants and industrialists all over Great Britain, and opposition from some sympathetic and influential members of Parliament, the government moved to outlaw all private coins. With only a couple of exceptions, and after several delays (forced by popular complaints), all private coin issuers were forced to retire their coins by 1817. By then the government had modified or was in the process of modifying many of its coinage policies, embracing practices pioneered by the private sector, including ones it had condemned in acting to suppress private coinage, while also drawing on the private sectors’ impressive pool of coining talent to staff the refurbished Royal Mint.

Eventually Great Britain and other nations figured out how to supply decent coin in adequate quantities. Most experts assume that the key to this success was switching from manual screw presses to steam-powered equipment (Boulton’s invention). The chapter “Steam, Hot Air, and Small Change” shows that steam power was not what mattered; nor was it what made commercial coinage successful, as several authorities have claimed. Indeed, a review of the history of steam power in Birmingham reveals that the Soho mint was the only steam powered commercial mint. It was not so much the old Royal Mint’s equipment as its policies that were to blame for Great Britain’s coin shortages. More fundamentally, a government monopoly mint simply lacks the sort of incentives that caused Great Britain’s competing private mints and coin issuers to produce coins of the highest quality and to administer their coinage system in a manner suited to the needs of industry.

The epilogue brings the story of private coinage in Great Britain up to date by describing how Ralph Heaton II purchased the contents of the last Soho Mint at auction in 1850. Heaton used that equipment to establish the Birmingham Mint, Ltd., which became the biggest private mint in the world, and survived until just recently, having been a major producer of Euro coins and blanks. In 2003, however, the Royal Mint—embittered by its failure to win a substantial share of the Euro market—took advantage of public subsidies to force its private rival out of business, violating a long-standing agreement to share foreign coining contracts with the private sector. Parliamentary investigations subsequently found the Royal Mint guilty of gross mismanagement. In December 2004, the Royal Mint’s status was changed from Treasury agency to government-owned firm in what many saw as a prelude to its privatization.

George Selgin is a Research Fellow at the Independent Institute and BB&T Professor of Free Market Thought at West Virginia University. His research covers a broad range of topics within the field of monetary economics, including monetary theory, monetary history, macroeconomic policy, and the history of monetary thought.

He has written on these subjects for numerous journals, including the British Numismatic Journal, The Economic Journal, the Economic History Review, the Journal of Economic Literature, and the Journal of Money, Credit, and Banking, as well as for The Christian Science Monitor, The Financial Times, The Wall Street Journal, and other popular outlets. He is also a co-editor of Econ Journal Watch, an electronic journal devoted to exposing “inappropriate assumptions, weak chains of argument, phony claims of relevance, and omissions of pertinent truths” in the writings of professional economists. His previous books include The Theory of Free Banking (Rowman & Littlefield, 1988), Bank Deregulation and Monetary Order (Routledge, 1996), and Less Than Zero: The Case for a Falling Price Level in a Growing Economy (Institute of Economic Affairs, 1997). Professor Selgin holds a Ph.D. in economics from New York University.