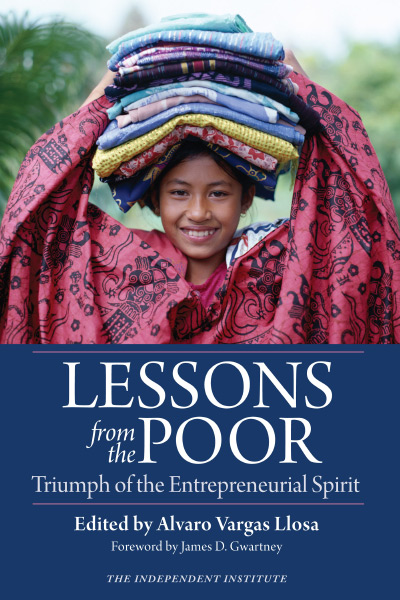 Entrepreneurship is not the exclusive preserve of the developed countries—it can be found even in poor counties not known for innovation and free enterprise. In fact, millions of small-scale entrepreneurs manage to eke out a living, often in highly creative ways, despite significant obstacles posed by stagnant economies, stifling bureaucracies, and despotic governments. In examining recent examples of successful entrepreneurs who have prevailed against the odds, the contributors to Lessons from the Poor, edited by Alvaro Vargas Llosa (Senior Fellow, The Independent Institute) suggest that the desire to improve one’s material circumstances is an ever-present condition of the human spirit.

Through a series of case studies of entrepreneurs in Latin America and Africa, Lessons from the Poor sheds light on how public policies have helped or hindered entrepreneurship and economic development. The book examines the business strategies and practices that have enabled small-scale entrepreneurs—individuals who possessed very little means but an abundance of vision and tenacity—to flourish beyond all reasonable expectations.

“All of the stories that make up this series were extensively researched on location by the various authors and their support teams,” writes Vargas Llosa in the book’s introduction. “Together, they provide a tantalizing account of the potential and the achievements of poor people in Peru, Argentina, Nigeria, and Kenya, and of the way in which countries that were once deemed poor and hopeless, such as Spain, Vietnam, and Estonia, have seen their economic fortunes turn despite persistent problems.”

The book begins with two success stories from Peru. The first is Kola Real, a soft-drink company founded in the late 1980s on the Añaños family’s farm in the Peruvian Andes.

By most accounts, Peru in those years was an unlikely birthplace for a fast-growing start-up that would challenge established giants like Coca-Cola, explains Daniel Córdova in the chapter, “Amid Hopelessness, Hopeful Investment.” The militant group Shining Path dominated parts of the countryside, and Peru’s leaders were pounding the economy into the ground by nationalizing industries, erecting trade barriers, accelerating money supply growth to hyperinflationary levels, and scaring off foreign investment.

Peru’s political and economic turmoil made it increasingly difficult for the leaders of its soft-drink market to operate profitably, but the Añaños family saw opportunity in the chaos. What they lacked initially in financial resources, marketing acumen, and distribution capabilities, they made up for with enthusiasm. They focused initially on low-income rural consumers, who were motivated more by low prices than by brand loyalties. They also sought low-cost production methods, overcame barriers imposed by competitors, forged alliances with suppliers and clients, innovated novel methods of marketing and promotion, managed their finances prudently, and continually developed new products.

The results have been phenomenal. Kola Real’s regional soft-drink, Big Cola, trails only Coca-Cola, Pepsi, and Sprite. By 2002, the company made an estimated $1 billion in annual sales; owned fourteen manufacturing plants, with a two billion liter annual capacity; and had subsidiaries in Mexico, Venezuela, Ecuador, four Central American countries, and Thailand.

The second case study from Peru is a rags-to-riches story—literally. In the mid-1960s, Aquilino Flores, who had no capital, was washing cars for a living when he began to sell cotton T-shirts at the car washes. By 2007, the company he founded, Topy Top, was Peru’s leading textile and garment exporter, generating annual sales greater than $100 million. Daniel Córdova examines Topy Top and its spectacular rise in the chapter “Defeating Poverty Doing Business.”

Flores and his family seized opportunities that arose unexpectedly. They studied their customers’ preferences. They located their plants in areas with experienced textile workers and encouraged worker loyalty. They learned how to succeed first in the informal economy, then in poorer rural markets, and finally in developed countries. They created their own dye factories and vertically integrated their production. They opened retail stores in countries to which they exported goods. They managed their finances conservatively and strove toward increased professionalism.

Although Topy Top’s success was made easier by tax cuts, trade liberalization, and other reforms of the 1990s, it was fundamentally a success of the company’s own making.

Until recently, Kenya’s consumers were limited to a narrow range of locally produced foods and unreliable goods sold primarily at kiosks. Since the mid-1990s, however, Kenyans have been able to purchase a growing variety of reputable products in supermarkets located in the bigger cities, explain June Arunga and Scott Beaulier in the chapter, “Nakumatt: A Kenyan Supermarket.”

When Nakumatt was founded in 1980s, it was a small retail shop selling blankets and mattresses in Nakuru, Kenya’s fourth largest city. Today, Nakumatt is a retail giant with 3,000 employees and a prestigious award for East Africa’s Most Respected Company in the Service Sector. Reasons cited for Nakumatt’s success include high levels of customer care and its partnerships with other companies, including the subletting of space in its stores to other retailers.

Nakumatt’s human resource policies are key to its success. New hires must meet an educational and conduct standard. Then they go through a three-month training program that teaches them about the whole company. Unlike most companies, Nakumatt recruits all managers from within; thus, an employee might start out as a delivery driver and within six years become a branch manager. These policies help cultivate in employees a strong work ethic and a sense of belonging.

Thompson Ayodele’s chapter, “The Nigerian Clothing Design Industry,” looks at a business that is both highly entrepreneurial and traditional in Yoruba culture. The colors and patterns of adire attire communicate one’s mood and status in ways readily understood by average people. The production-to-sale process begins with preparation of dyes made from elu tree leaves, follows with the dyeing of cloth, and concludes with the cash sale of the clothing to the retailer after a physical meeting.

Although nearly half of the 5,000 or so adire workers are self-employed, many of them have done well. The bottom nineteen percent of the 1,100 entrepreneurs polled for this chapter earned more than state and federal government civil servants, who are paid the minimum wage. More significantly, the top forty percent of them earn as much or more than managers in both the private and public sectors. This is especially notable because about seventy percent of adire entrepreneurs are women with little formal schooling and few alternatives for earning a living.

Unfortunately, Nigeria’s regulations make it hard for them to sell directly overseas to the growing market of Nigerians living abroad, which severely limits the income potential of the adire entrepreneurs.

Many entrepreneurs set out to make a good living by seizing an unnoticed profit opportunity. Others start their enterprise mainly in response to barriers, often government imposed, to other avenues of making ends meet. A notable example of the latter kind is examined in the chapter, “Barter Clubs in Argentina: The Market’s Response to the Failure of the State,” by Martín Simonetta, Gustavo Lazzari, and Gabriel Gasave.

Argentina’s barter clubs started in the mid-1990s, as a way for members to obtain goods and services while avoiding taxes and reducing their need to hold a rapidly depreciating currency. The clubs became more useful to their members as they grew, because more goods and services were available for barter.

Although about 200,000 people joined clubs in 1999, their membership swelled to an estimated 2.5 to 6 million members during the economic crisis of 2001-2002. Because keeping track of members’ accounts was becoming increasingly difficult, the clubs developed a private currency their members considered reliable—unlike the government-issued pesos whose value had fallen seventy percent.

Buy Lessons from the Poor