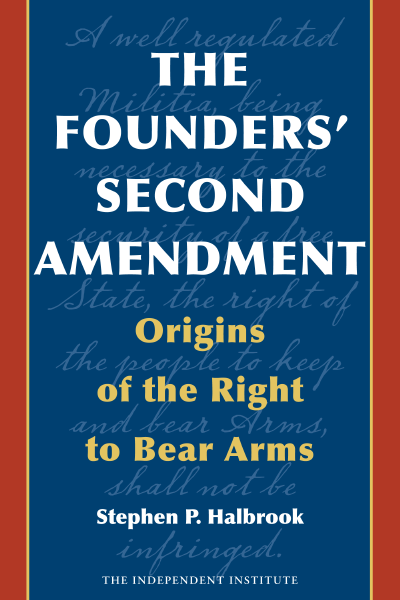 The Founders of the American republic sought to guarantee “the right of the people to keep and bear arms” as a fundamental liberty. They also declared a “well regulated militia” to be necessary to secure “a free state.” Passionately discussed today in the context of the gun control controversy, the Second Amendment to the Constitution has become a controversial enigma. But what experiences led the Founders to adopt it, and what did it mean to them?

In his latest book, The Founders’ Second Amendment: Origins of the Right to Bear Arms, Stephen P. Halbrook provides perhaps the most important piece of the puzzle regarding that often-misunderstood amendment—the first truly comprehensive account of how the generation of the Founders of the American Republic viewed “the right of the people to keep and bear arms,” from the pre-Revolutionary days through the passing of that generation.

“This work seeks to present the views of the Founders who actually created the Second Amendment,” Halbrook writes in the book’s introduction. “It is based on their own words as found in newspapers, correspondence, debates and resolutions. Generous quotations from the Founders are used to allow them to speak for themselves, thereby avoiding the appearance of re-characterization of their views.”

Although The Founders’ Second Amendment answers such questions as whether the Constitution’s creators sought to guarantee an individual right or a collective right, it also shows that the Amendment’s history is interesting for reasons that go far beyond its usefulness for resolving modern legal controversies. At last, readers have a lively resource that will enable them to fully comprehend the Founders’ understanding of what is necessary to guarantee, as the Amendment itself states, “the security of a free State.”

Increasingly serious clashes between the colonists and the British authorities, examined in Chapters 1 to 4, led the Founders to adopt the Second Amendment. In 1768, the Redcoats began to occupy Boston and the patriots spread the alarm that, among other deprivations, the inhabitants were to be disarmed. The presence of a standing army quartered within the population led the colonists vigorously to assert their rights as Englishmen. The tragedy of the Boston Massacre only solidified the patriots’ commitment to protect themselves, by arms if need be.

From the Boston Tea Party to the Powder Alarm, repressive measures against the increasingly troublesome Americans sharply escalated. The Royalist-imposed government in Boston debated a prohibition on all private arms. General Thomas Gage’s troops seized the gunpowder in the powder houses, cutting off the supply. Searches and seizures, including alleged entrapment, were instituted against those attempting to obtain and distribute arms.

Well aware that the colonists were making every effort to arm themselves, George III sought to cut off all arms and ammunition at the source by prohibiting the export of these articles from Britain, Holland, and elsewhere and blocking their import into the colonies. This arms embargo was combined with stepped-up search-and-seizure operations in Boston.

The “shot heard ’round the world” at Lexington and Concord in 1775 involved the Redcoats’ attempted seizure of arms hoarded by militiamen and the repulse of these troops by local citizens armed with their own muskets and sporting arms. This led General Gage to impose the confiscation of all firearms from Boston’s civilians, under the promise that those in compliance could depart the besieged city. After seizing the arms “the perfidious Gage” held the townsfolk as hostages. News spread throughout the colonies.

Of Revolution and Rights

The Revolution had now been sparked. Its philosophy, as expressed in the Declaration of Independence, was that the people must endure some amount of injustice, but they may wage armed resistance when injustice becomes tyranny. The ramifications of this republican doctrine are presented in Chapter 5.

Beginning in 1776 and continuing during the War for Independence, the states took measures to provide for their own governance, as Chapters 6 and 7 detail. Virginia was the first state to adopt a declaration of rights, which included the admonition for “a well regulated Militia, composed of the Body of the People”; Pennsylvania was the first to declare that “the people have a right to bear arms for the defense of themselves, and the state.” These principles were held dear in all of the states without regard to whether they adopted a bill of rights. Skeptics deemed it unnecessary to list the many rights of mankind in a formal instrument.

The Constitution and Compromise

With independence won and rights vindicated, the next phase of the Second Amendment’s saga begins with the drafting of the Constitution at the Philadelphia convention in 1787. Its lack of a bill of rights was defended in The Federalist Papers and attacked by the Antifederalists. But both sides agreed, as explained in Chapter 8, with the ideal of an armed populace.

The proposed constitution was then considered by the state conventions, largely in 1788, as Chapter 9 explains. In the initial phase, those demanding a bill of rights protecting free speech or any other right could not muster a majority in any convention. However, the Pennsylvania Minority proposed that “the people have a right to bear arms” to defend themselves, the state, and the United States, as well as for hunting. In the Massachusetts convention, Samuel Adams proposed that “peaceable citizens” have a right to keep “their own arms.” Finally, the New Hampshire convention became the first to propose a bill of rights, including that “Congress shall never disarm any citizen” unless in rebellion.

In Virginia’s convention, Patrick Henry argued “that every man be armed,” and George Mason drafted a declaration of rights, including a guarantee of “the right of the people to keep and bear arms.” James Madison and his Federalist colleagues reached the great compromise with the Antifederalists: Virginia would ratify the Constitution without a bill of rights, but would propose one and urge its prompt adoption. How Virginia tipped the scale in favor of a declaration of rights is described in Chapter 10.

In the remaining state conventions, the majority in favor of a bill of rights had become irresistible. New York demanded one, and North Carolina refused to ratify the Constitution until a bill of rights had been introduced in Congress. Chapter 11 explains these developments, which included significant mention of the right to bear arms.

“To Keep and Bear Their Private Arms”

James Madison lived up to his promise and introduced what became the Bill of Rights in the first session of Congress in 1789. The Second Amendment was interpreted, as Federalist Tench Coxe expressed it, to guarantee the right of the people to keep and bear “their private arms.” The Senate rejected restricting the right to bear arms to “the common defense” and also rejected a proposed state power to maintain a militia. These developments are described in Chapter 12.

The proposed Bill of Rights was then considered for adoption by the states. No record exists of any criticism of “the right of the people to keep and bear arms,” although the militia clause was taken to task for not actually doing anything. The Bill of Rights, as explained in Chapter 13, was finally adopted in 1791.

Meanwhile, the nature of a well-regulated militia was debated in Congress. The Militia Act of 1792 would require that all able-bodied white males enroll in the militia and provide their own arms. Both the power of the states to maintain militias and the right of individuals to have arms for self-defense, as Chapter 14 shows, were considered basic.

The first commentary on the Constitution, by St. George Tucker, posited that the Second Amendment protects individual rights and that legislative infringement was subject to judicial review. George Washington, John Adams, and Thomas Jefferson exposited and exercised the right to bear arms. James Madison, writing in his final years, reaffirmed his association of republican government with an armed populace.

What Does the Second Amendment Say?

The book concludes with a linguistic analysis as informed by the Founders’ usage of terms. The terms “right of the people” as used in the First, Second, and Fourth Amendments are contrasted with such phrases as “the militia, when in actual service” in the Fifth Amendment and with the powers “reserved to the states respectively” in the Tenth Amendment.

A lively debate has erupted in recent times on the meaning of the Second Amendment. Under the “collective rights” view, the Amendment protects state powers to maintain militias, not an individual to keep and bear arms. A hybrid version argues that it protects a “civic right” to bear arms in the militia. The historical evidence set forth in this book, however, suggests that the Founders had a predilection for both a well-regulated militia and an individual right to have arms, and that they envisioned that the two clauses of the Amendment would complement rather than be in tension with each other.