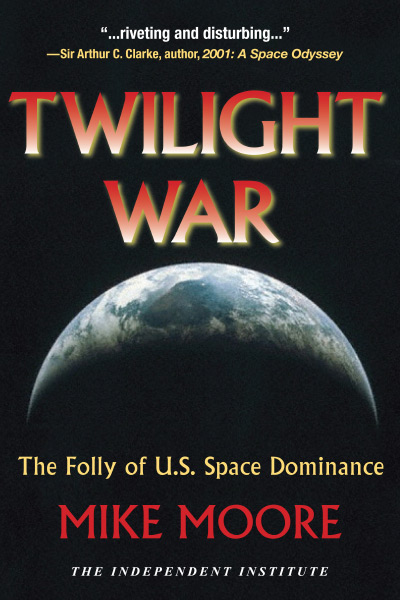 The 1967 Outer Space Treaty, inspired largely by President Eisenhower, designated space as the “province of all mankind.” It expressly prohibited weapons of mass destruction in orbital space and limited the use of the Moon and other celestial bodies to “peaceful purposes.” But changes in the post–Cold War world, as well as unforeseeable advances in satellite and weapons technologies, have compelled every space-faring nation—save the U.S. and Israel—to go on record as favoring a new treaty for the Prevention of an Arms Race in Outer Space.

In the grand tradition of American exceptionalism, Washington has been adept at avoiding the issue. The administrations of Ronald Reagan, George H. W. Bush, Bill Clinton, and George W. Bush have blocked negotiations, citing potential threats to U.S. “rights, capabilities, and freedom of action.” Self-proclaimed “space warriors” even argue that U.S. military dominance in orbital space will be the only guarantee for international peace in the future.

But in Twilight War: The Folly of U.S. Space Dominance, Mike Moore, former editor of The Bulletin of the Atomic Scientists, argues that the U.S. merely provokes conflict when it presumes to be the exception to the rule. Rejecting treaty negotiations while further militarizing space renders America unable to lead by example. “Unilateral military actions in space will not guarantee American security; they will guarantee conflict, and possibly, a new cold war,” Moore concludes. Instead of trying to stop an arms race in space by starting one, the U.S. must radically rethink its strategy.

Twilight War does not question the motives of the space warriors. But it does question their ideas and plans. The first two chapters introduce the concept of unilateral space dominance. The U.S. Space Command, Air Force Space Command, and the congressionally mandated Space Commission, chaired by Donald Rumsfeld in the months before he became Secretary of Defense, have issued reports advocating U.S. dominance in space. Space dominance is not yet national policy, but the space warriors are pushing the United States in that direction.

Chapters Three, Four, and Five explain the space warriors’ reasoning: Because America’s new approach of precision war requires the intense use of space “assets,” the United States must preemptively develop the means to protect those assets, in part by neutralizing the satellites of other nations. Already the United States has an effective antisatellite system in the guise of its national missile defense system. This system is unlikely to work well if missiles are ever launched against the United States, but it would work well if used in an offensive mode against the satellites of other nations. Space warriors call this “space control.”

Chapters Six through Eleven provide the historical background for understanding the militarization of space. Chapter Six—“Put to the Sword”—takes you back to the years after World War I, when the uniquely American concept of “precision warfare” began to emerge. Precision bombing was supposed to be a new and humane way of fighting wars. Wars would be brief because the enemy’s war-related industries and infrastructure could be targeted, making it impossible for the enemy to continue fighting. In addition, precision attacks would save civilian lives.

It didn’t work out that way. Hundreds of thousands of German and Japanese civilians died in the early attempts at “precision” war. Today, the United States has improved marginally, sparing civilian lives more than in previous modern wars. A variety of space satellites allows for such precision. Space warriors say that these space assets must be protected. But, Twilight War asks, how best to protect these assets? Is unilateral space dominance the way? Or is a tough and fully verifiable space treaty the answer?

Chapters Seven and Eight examine the rise of the space-dominance paradigm. As early as May 1946, Project RAND, then an Air Force think tank, predicted that Earth satellites were possible. They would help in establishing reliable global communications, predicting weather, conducting scientific research, and waging war. “After observation of its trajectory,” RAND said of a possible weapons satellite, “a control impulse can be applied in such direction and amount, and at such a time, that the satellite is brought down on its target.”

Chapters Nine through Eleven emphasize the wisdom of President Eisenhower, who came under intense pressure after Sputnik to take military control of space. Eisenhower would have none of that. Extending the East-West arms race into space would only worsen U.S.-Soviet tensions. The idea was to ease tensions, not exacerbate them.

The value of space, Eisenhower believed, lay mostly in spy satellites. Rather than guessing about Soviet intentions, U-2 planes and spy satellites would deliver hard data about what the Soviets were actually up to. “Without [aerial reconnaissance],” Eisenhower told a colleague, “you would only have your fears on which to plan your own defense arrangements and your whole military establishment.... Now if you’re going to use nothing but fear and that’s all you have, you are going to make us an armed camp. So this kind of knowledge is vital to us.” The hard data revealed that the United States far outpaced the Soviet Union militarily, a reality that freed the president to pursue a peace agenda.

The Road Not Taken

Chapter Twelve argues that the best way for the United States to secure space for itself and the other forty-plus spacefaring nations is by leading negotiations for a fully verifiable space treaty that would prevent any nation, including the United States, from developing space-related weapons.

The United States holds high the banner of the rule of law on every continent. Why not at least engage in serious treaty talks? The final chapters attempt to answer that question, in part, by linking the dream of unilateral space dominance to the grand old tradition of American exceptionalism—the notion that the United States, and only the United States, is free to do what it wants on the world’s stage, perhaps because Providence has favored it above all other nations.

Some, including Mike Moore, believe that the florid rhetoric of “manifest destiny” is a dangerous and self-defeating expression of national hubris. To many of today’s space warriors, such expressions seem like truth and ample justification for America’s dominance of space.

Twilight War concludes with four appendices. The first recounts old dreams of space travel—and how even early visionaries foresaw weapons in space. Appendix B explains how satellites stay in orbit. Appendix C links the notion of space control to the much older concept of dominating the air. Appendix D demonstrates that for more than six decades space warriors have dreamed of having a spacebomber—and even as you read this, the dream lives. The final appendix—“Useful Websites”—is a must for those who wish to become experts on the subject.

Mike Moore is a Research Fellow at the Independent Institute and former editor of The Bulletin of the Atomic Scientists, a science-oriented peace-and-security magazine founded by key members of the Manhattan Project. He has been a reporter and editor for the Kansas City Star, Chicago Daily News, Chicago Tribune, and Milwaukee Journal, as well as the editor for Quill, the magazine of the Society of Professional Journalists. In addition to his work in journalism, he served on the Council on Foreign Relations Study Group “U.S. Space Posture for the 21st Century,” the Eisenhower Institute’s “Space Security Working Group on the Future of Space,” and the Stanley Foundation task force “Winning the Peace in the 21st Century.” He lives in Missouri with his wife, Sandy.