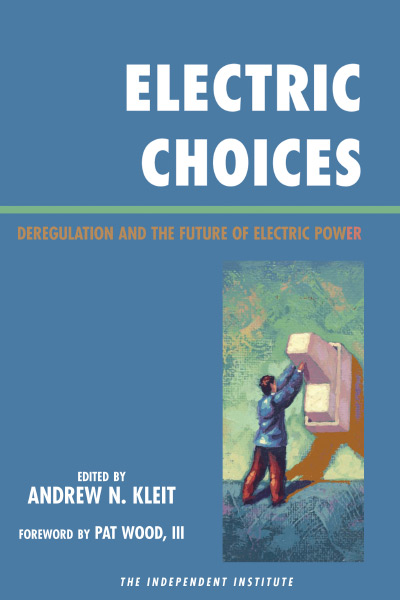 In the late 1970s, the regulatory landscape in the United States began to change significantly as competition and deregulation were introduced to telecommunications, airlines, trucking, natural gas and oil transportation, financial services, and other industries—with impressive results. Competition increased, the pace of innovation accelerated, prices fell, and the reforms were viewed as successful. Economic restructuring and liberalization eventually came to the electric power industry but in a more piecemeal fashion.

The results have prompted a host of questions from policymakers and the public: What lessons can be learned about the successes and failures of past restructurings? How much regulation does the electric industry need? Are coordination and distribution best handled public or privately? If the latter, would for-profit or non-profit organizations better serve consumers? In Electric Choices: Deregulation and the Future of Electric Power, edited by Andrew N. Kleit (Pennsylvania State University), fifteen leading experts address these and other key issues that will determine whether electricity will become cheaper and more reliable, or more expensive and prone to blackouts.

In the mid-1990s California, Pennsylvania, Texas, and smaller states in the Northeast embarked on electricity restructuring, i.e., they opened up that sector to competition. The results varied widely. At one end of the spectrum, Pennsylvania’s restructuring was viewed as successful. On the other end, California’s electricity crisis of 2000– 2001 brought the restructuring movement to a halt, leaving electricity markets at the retail level half deregulated and half regulated.

In Chapter 2, Andrew Kleit and Timothy Considine (Pennsylvania State University) compare restructuring efforts in California and Pennsylvania. They find that even if California had not deregulated its electricity industry, it would have faced higher electricity prices for several reasons, including a shortage of generation capacity and bottlenecks in producing and delivering additional natural gas supplies for power generators.

Lynne Kiesling (Northwestern University) examines the retail side of the industry in Chapter 3. She contends that the “one size fits all” approach of regulated and fixed rates is becoming increasingly obsolete due to technological, institutional, regulatory, and cultural changes. Retail reform would not only promote a more efficient electricity market directly, it would also promote it indirectly by helping to maximize the value of other market reforms.

In Chapter 4, Stephen Rassenti, Vernon Smith, and Bart Wilson (all of George Mason University) review the use of experimental economics to inform the debate on electricity market regulation. The studies reviewed demonstrated in practical terms how electricity markets could be divided into transmission, system operation, and marketing, laying the groundwork for practical restructuring in the 1990s. In particular, experimental economics (a field for whose development Vernon Smith won a Nobel Prize) show that the use of demand-side bidding for a relatively small fraction of the market can serve to reduce price spikes and the exercise of market power. Demand-side bidding would also ease the need (or the perceived need) for price caps in many regions. Similar experimental results also show how competitive transmission markets can be constructed.

In Chapter 5, Terry Daniel, Joseph Doucet, and Andre Plourde (all of University of Alberta) examine the successful, but often overlooked, restructuring experience in the Canadian province of Alberta. This restructuring creates an ideal test case study for policy analysis. In addition, several aspects of Alberta’s electricity restructuring are unique, interesting, and merit consideration.

Another difficult issue for electricity restructuring is transmission. The common wisdom on transmission is that because it exhibits economies of scale, it is not subject to restructuring. William Hogan (Harvard University), the leading writer in this area, takes issue with this view in Chapter 7. To enhance entry into transmission markets, Hogan suggests that owners of new transmission be able to restrict access across their lines in order to capture monopoly profits. Although this proposal is consistent with standard antitrust law, it is in conflict with Federal Energy Regulatory Commission (FERC) policy, which calls for open and complete access to such facilities.

Successful restructuring plans will seek to limit any opportunities for firms to exercise “market power,” i.e., pricing advantages that leading firms have when operating in markets with relatively few competitors and significant barriers to entry. In Chapter 8, Timothy Brennan (University of Maryland, Baltimore County) argues that most empirical studies of market power in electricity rely on a flawed application of a standard measure of market power—the Lerner index. Flawed measures could lead, and perhaps already have led, regulators to prevent sales of electricity above the highest average variable cost of the generators used to provide electricity. Preventing at least some firms from earning revenues in excess of their average variable costs will encourage present suppliers to leave the market and discourage new firms from entering. Without such entry, competitive electricity markets are likely to fail.

The standard model of electricity competition is a relatively large generation plant, sending electricity through a natural monopoly distribution system to customers. What if, instead, a substantial number of customers could produce their own power? David Dismukes (Louisiana State University) explores this possibility in Chapter 9, outlining the prospects for distributed energy resources (DER). DER refers to generation, storage, and demand-side management devices that are connected to the electric grid at the distribution level. In many instances, DER can provide the electricity consumer with greater reliability, higher power quality, and more flexible choices.

In Chapter 10, Lynne Kiesling and Michael Giberson (George Mason University) review the U.S.-Canada Power System Outage Task Force's Final Report on the Northeast American blackout of August 14, 2003. The report recommended policies based almost entirely on an engineering and regulatory approach. Kiesling and Giberson, in contrast, make the case for pursuing a more economically sophisticated approach to industry restructuring. They focus on the possibility of commercializing reliability by reforming the reliability rules to properly align incentives and information flows.

Opening electricity generation to competition sparked a revolution in the electricity industry, but for the benefits to be fully realized, restructuring must proceed with greater attention paid to incentives, consumer preferences, and system-wide flexibility. Pat Wood III, former Chairman of FERC, writes in the foreword to the book, “The superb and very timely analysis and recommendations in Electric Choices will help us to finish the revolution.” Completing that task would ensure a bright future for electric power and its users.

Andrew N. Kleit is Professor of Energy and Environmental Economics at Pennsylvania State University and has been an economist with the President’s Council of Economic Advisors and the Federal Trade Commission.

About the Foreword Author

Pat Woods III is the former Chairman of the Federal Energy Regulatory Commission.