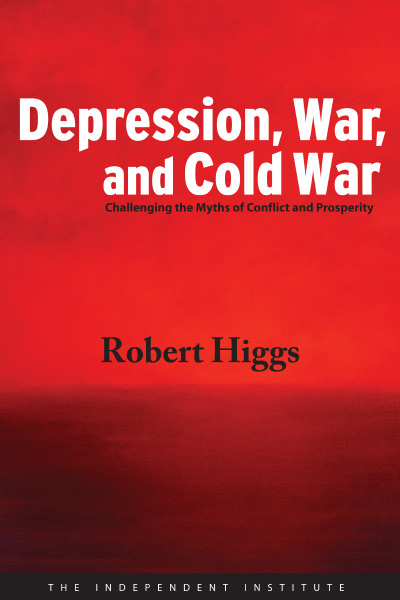 American history is a subject filled with urban legends and propaganda promulgated by partisan interest groups. In his classic work Crisis and Leviathan: Critical Episodes in the Growth of American Government (Oxford University Press, 1987), economist and historian Robert Higgs (Senior Fellow, The Independent Institute) addressed dozens of misconceptions about the growth of the U.S. government during the twentieth century and offered a bold new theory in their place: The largest military and economic crisis of that century, he showed, eroded traditional constraints on the growth of American government. After the crises had passed, Americans were left with a government larger in size, scope, and power and more institutionally entrenched than before.

In Depression, War, and Cold War: Challenging the Myths of Conflict and Prosperity, Higgs shows how the Great Depression, World War II, and the Cold War transformed the American political economy. Collecting ten of his most important scholarly papers written since the publication of his earlier book, Depression, War, and Cold War demonstrates Higgs’s masterful grasp of the relevant scholarly literature and his keen analytical ability to discern the larger meaning of statistical minutiae overlooked by many economic historians. The result is a work that sheds light not only on three of the most monumental events in recent U.S. history, but also on the economic and insti­tutional context in which the policymakers of today operate.

For decades, mainstream historians and members of the public largely believed that President Franklin D. Roosevelt “rescued” America from the depths of the Great Depression through his administration’s New Deal programs and court decisions. In recent years this view has met serious challenges from such noteworthy works as Gary Dean Best’s Pride, Prejudice, and Politics: Roosevelt versus Recovery, 1933–1938, and Gene Smiley’s Rethinking the Great Depression.

Higgs adds to this reassessment of Roosevelt’s legacy by arguing that FDR’s policies and appointees inadvertently prolonged the Depression by fostering “regime uncertainty”—i.e., doubts about the security of property rights and the rule of law—which discouraged investors from investing in the long-term projects necessary to return the economy to health.

Another misunderstood issue surrounding twentieth century America is the origin of the U.S. military’s growing size during peacetime. It is often assumed that this trend began during the Cold War or was carried over from World War II—perhaps because President Dwight Eisenhower, in his 1961 farewell speech, warned against the unwarranted influence of the “military industrial complex.” Higgs traces one key aspect of this relationship to changes in weapons procurement policies adopted in 1940–41. These policy changes shifted a large portion of risk from private suppliers to the taxpayers at large.

Many historians and economists believe that standard measures of macroeconomic performance show evidence of “wartime prosperity.” But, as Higgs explains, because the United States had a command economy during World War II, many of these mea­sures are highly misleading, while others are conceptually inappropriate. Meaningful national product accounting requires market prices, but the command economy of the war years rendered all prices, especially those paid by the government for goods and services, completely arbitrary. Furthermore, the U.S. government’s “socialization of investment” during the war distorted the allocation of capital goods and labor. Most of the capital formation alleged to have occurred during World War II consisted not of increases of real capital goods but of durable munitions such as weapons platforms, guns, ammuni­tion, and related supplies—which did noth­ing to increase production for the civilian economy.

As Higgs explains, the postwar transition to a peacetime market economy was one of the most remarkable events in U.S. economic history. By 1947, real military spending had hit its postwar low of 4.3 percent of GNP, millions of workers had left government service and returned to the private sector, and the country had returned to an economic normality not seen since before the Great Depression. But despite the size, speed, and uniqueness of the postwar reconversion of the U.S. economy, economists and economic historians have devoted minimal attention to it. The little they have written about it often falsely assumes that the wartime command economy is directly comparable to the prewar and the postwar economy.

The Cold War significantly affected the economic performance of the United States, although economic historians have neglected this subject as well, continues Higgs. From 1948 through the 1960s the dominant Cold War ideology and a bipartisan consensus on defense and foreign policy centered on global containment of Communism and deterrence of a Soviet attack on Western Europe or the United States. These conditions supported the unprecedented allocation of resources to the “peacetime” military establishment. This ideological climate was essential in maintaining high levels of resource allocation to defense but not sufficient to prevent citizens’ skepticism. From 1968 to 1976, for example, military spending fell sharply due to a decline of public support. Periodic crises, however, helped revive an atmosphere of tension, distrust, and insecurity, which in turn fostered the continuation of the U.S. Soviet arms race.

Yet not all of these crises were genuine. A U.S.-Soviet bomber gap in the mid-1950s, a missile gap between 1958 and 1961, and a subsequent antimissile gap and first-strike missile gap are among the “crises” later revealed to have been false alarms. One reason for the error was that the National Security Act of 1947 greatly expanded the kinds of government documents that could be clas­sified as official secrets, thereby preventing citizens (and even most of their political rep­resentatives) from holding informed opinions on military spending. This asymmetry made the public highly susceptible to information distortion by the Department of Defense, the National Security Council, the intelligence community, and other components of the national security elite.

Another problem with national defense, as Higgs demonstrates, is that members of Congress have treated defense programs as a means to serve their own selfish, parochial, and wasteful ends. Consider two of the most successful members of Congress. Rep. Dan Flood (D-Penn.) served 16 terms from 1944 to 1980. Flood’s leadership on the Defense Appropriations Subcommittee and the Labor and Health, Education, and Welfare Appropriations Subcommittee enabled him to extract political favors from other legislators. Although Flood generously supported defense appropriations, at times his logrolling conflicted with specific proposals favored by the military, such as the transition from coal-to oil-powered furnaces on U.S. military bases in Europe. Flood’s obstruction of this conversion cost taxpayers hundreds millions of dollars in excessive heating costs but enabled him to win votes from the anthracite coal region of his state. Similarly, Rep. Joseph McDade (R-Penn.), who served on the Defense Appropriations Subcommittee, represented the hard coal region of his state and blocked base furnace conversion.

Congressional micromanagement of national defense programs grew dramatically after the Vietnam War and the Watergate scandal. In 1970, Congress made 830 adds or cuts to line items in defense authorization or appropriations acts; in 1987 that number had swelled to 3,422. Too often, line-item legislating has promoted the narrower interests of members of Congress rather than national security. This outcome is most evident where Congress has continued to fund projects the Pentagon had recommended scrapping in favor of projects it has deemed more deserving. In 1978–81, this “pork hawk” waste included Congress’s unnecessary purchase of 56 A-7 subsonic attack planes (at a cost of $575 million), mostly due to lobbying by the congressional delegation from the state in which the A-7s were manufactured.

What do U.S. defense contractors get for their efforts? Do they tend to earn average rates of profit for the amount of risk they face—or something more? In a co-authored paper, Higgs and Ruben Trevino compute three measures of profitability for the top 100 companies receiving the largest volume of prime contract awards. In the 1970s, the top defense contractors significantly outper­formed the market in terms of stock market returns (i.e., dividends plus appreciation), whereas in the 1980s they significantly out­performed the market in terms of accounting rates of profit (return on investment and return on assets). From 1970 to 1989, an investor who held a portfolio of the top defense firms would have increased the value of his holdings by a multiple of 14.78, compared to a market multiple of 8.19 for the Standard & Poor’s 500.

The military-industrial-congressional complex, Higgs shows, is not monolithic; each component competes against the others for resources and influence. Public opinion also plays a significant role in defense spending, as Higgs and Anthony Kilduff explain. Drawing on the results of 181 national surveys taken from 1965 to 1989, they find that changes in military spending lag (and closely track) changes in public opinion on military spend­ing. Employing a variety of statistical tests, they also find that changes in public opinion in a given year account for 65 percent of the variance of defense spending in the following year—a remarkably high explanatory power for just one variable—and that number reaches 89 percent when a model with four lags is employed. Thus, at first blush it seems that the public gets the amount of military spending it wants.

But Higgs and Kilduff hasten to add that although public opinions seems to influence both the executive branch’s and Congress’s budget decisions, one cannot assume that public opinion is autonomous or spontaneous. The competition among rival interests, within as well as outside the government, acts to move public opinion in a desired direction, while the public is largely dependent on the national security elite for its knowledge of military capabilities, the intentions of poten­tial adversaries, and other facts that should inform public opinion.