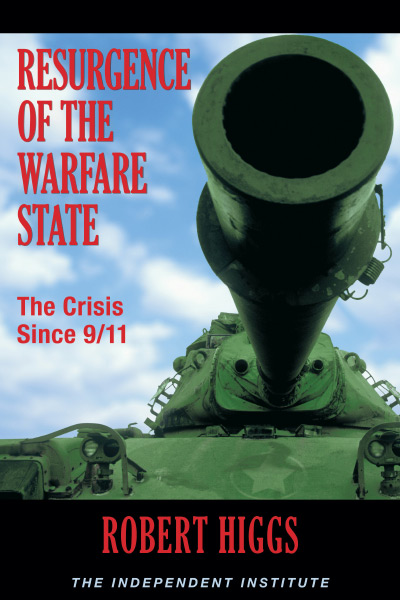 • “President Bush and his subordinates proclaim that the United States has entered into ‘a new kind of war.’ Unfortunately, this undertaking has the potential for the same kind of domestic abuses and excesses associated with previous U.S. wars.... To act rashly, as if our present reactions to the attacks of September 11 posed no long-term dangers to the very liberties we seek to protect, would be to repeat history in the worst way.” (ch. 2)

• “Congress has become so pusillanimous that it provides no check whatever on the president’s war making. In ‘authorizing’ the president to attack Iraq or not, entirely as he pleased, Congress not only abrogated its clear constitutional duty, but it did so with grotesquely cavalier disregard for the gravity of the matter at stake. It did not even bother to debate the issue, but simply handed over its power to the executive and returned to the workaday plundering that is its only remaining raison d’etre.” (ch. 7)

• “During the more than forty years of Cold War, annual military spending averaged 7.5 percent of GNP. Just in the past five years, military spending has cumulated to more than $1.5 trillion. You’d think that so much money would purchase a lot of national security. Yet, apart from the catastrophic attack on New York City, the Defense Department failed even to anticipate or to defend against the devastating attack on its own headquarters!” (ch. 12)

• “Since 1994, federal law has required government departments to make financial audits.... The Defense Department, however, has never been able to comply with the auditing requirement because its records are such a mess that they cannot even be audited.” (ch. 15)

• “Estimates for the occupation of Iraq in 2005 alone run as high as $75 billion, and the actual expenditures may well turn out to be even greater—government cost overruns are not unheard of, especially in the military-industrial complex. If the true costs of the war to date amount to, say, $200 billion, then the cost is equivalent to approximately $1,850 per household, say, $2,000 in round numbers (if it’s not there yet, it will be soon).” (ch. 47)

Soon after the terrorist attacks of September 11, 2001, the news media contacted Independent Institute Senior Fellow Robert Higgs, whose 1987 book Crisis and Leviathan: Critical Episodes in the Growth of American Government explained how national emergencies have increased the size of government at the expense of individual liberty. The steady demand for press inter-views prompted Higgs to author scores of newspaper op-eds, think-tank policy briefings, and Internet postings in which he argued that the U.S. government’s response to 9/11, like its responses to past crises, was taking us down the road to more government and less liberty.

Resurgence of the Warfare State: The Crisis since 9/11 brings together Robert Higgs’s “real time” analyses of the U.S. response in the three-and-a-half years that followed the September 11th terrorist attacks.

Higgs paints a bleak picture, showing how America’s political leaders in the name of “crisis management” have discarded many of the checks and balances created to thwart potential abuses of government power, spent additional billions of dollars on programs unrelated to national security, trampled civil liberties and due process at home, and pursued reckless military adventures that have needlessly killed thousands of innocents abroad.

Part I: Crisis and Leviathan, Again

Major crises such as the Great Depression and the world wars prompt the public to demand that the government “do something.” When the crises end, many emergency actions cease— but not all. Each emergency thus ratchets up the size of government and diminishes our economic and personal freedoms. The U.S. response to 9/11 has repeated this pernicious pattern, Higgs explains.

Nine days after 9/11, Higgs told Reason magazine (in an interview reprinted in chapter 1) that the “war on terrorism” would again enlarge the government—even in ways unrelated to national security—doling out pork to well-connected interest groups and bringing us ever closer to the realization of the Big Brother State. James Madison, the architect of the U.S. Constitution, had warned that war is the worst enemy of liberty, Higgs observes.

Two examples of how 9/11 has panicked people into advocating bad policies are the federalization of airport security and calls for reinstating the draft. The Transportation Security Administration was created to try to assure air passengers that the federal government was making them safer. But like other large bureaucracies, the agency soon suffered scandals that suggest it lacks real accountability and is prone to politicization.

Proponents of military conscription claim that improving pay and benefits wouldn’t entice enough people to join the military, but the “national glory” rhetoric of draft advocates suggests that they’re not very interested in trying to find out. Favorable talk about reinstating the draft indicates that in post-9/11 America, freedom has many fair-weather “friends” who would sacrifice liberty for security (and likely make us less secure).

Forty years of Cold War military spending did not protect the Pentagon and the Twin Towers from a devastating attack. The Pentagon was—and still is—spending billions on Cold War–era arms and equipment and devoting relatively few resources to counter the new threat of terrorism.

“Bizarrely, even the granddaddy of all military boondoggles, the ballistic-missile-defense system, has regained its momentum in the aftermath of the terrorists’ use of nonballistic missiles conveniently made available by United Airlines and American Airlines,” writes Higgs. “Just as the Korean War had served as the pretext for vastly increasing military spending on weapons and forces positioned worldwide, the so-called war on terrorism now serves as the pretext for throwing money at every constituent in the MICC.”

Never satisfied until a maximum amount of the defense budget has been diverted toward buying votes for their reelection, members of Congress strongly resist reallocations away from the established Cold War programs that currently channel taxpayer money to their political backers, Higgs explains. He also takes on three popular myths about the Defense Department—as well as a few sacred cows about the White House leadership itself.

Part V: Bush and the Bushies

President George W. Bush has spoken of his so-called "faith-based" domestic initiatives, but his foreign policy also warrants that label, given its clash with the empirical realities that have plagued nation-building throughout history, Higgs argues. Bush’s ambitions of wartime “greatness” parallel the flaws promoted in a book he reportedly has read, The Supreme Command: Soldiers, Statesmen, and Leadership in Wartime, by neo-conservative war hawk Eliot A. Cohen.

Higgs also notes the parallels between the Bush White House and that of John F. Kennedy. Not only did Bush and Kennedy share similar backgrounds and ambitions, the coterie of each ﬁt the profile of the “power elite” described insightfully in the (otherwise often flawed) writings of the late sociologist

C. Wright Mills half a century ago. In his 1958 book The Causes of World War Three, Wright coined another term that Higgs argues ﬁts Bush’s foreign policy: “crackpot realism.”

Part VI: The Road to War

Higgs’s analysis of the pre-war rationale for the March 2003 U.S. invasion of Iraq was prescient. The evidence for Saddam Hussein’s WMD programs proved highly flawed. Also, Bush’s breach of John Quincy Adams’s dictum (America “goes not abroad in search of monsters to destroy”) was soon seen by many as naked aggression. Members of Congress failed to challenge the President’s unconstitutional assertion of war-making power.

“A deeper patriotism—an allegiance to the principles of the American republic—lies beyond their comprehension,” writes Higgs. “Congress may posture and pretend, but it will do nothing substantial to exercise its constitutional authority to decide whether to commit the nation to war.”

The White House’s pre-war prevarications followed a presidential tradition, Higgs argues, citing William McKinley’s insincere rationale for the U.S. occupation of the Philippines after the Spanish-American War, as well as Woodrow Wilson’s and Lyndon Johnson’s similar duplicity during World War I and the Vietnam War, respectively. Had the highest priority been to thwart an emergent WMD threat, Saddam Hussein’s Iraq would not have topped the U.S. hit list, according to Higgs.

Among the worst consequences of the Iraq War were the deaths of innocent civilians due to the (misnamed) “precision bombing” of densely populated areas, Higgs argues. A 2,000 pound JDAM “smart bomb” is supposed to strike within 13 meters of its target, as compared to an error range of 60–70 meters for its less-sophisticated counterpart. But in Baghdad, a city of 6.4 million people comparable in area to Boston or Detroit, and in other densely populated Iraqi cities even this degree of precision could not guarantee zero civilian deaths.

The inevitability of civilian casualties—along with the status of the Iraq War as an optional “war of choice”—made the decision to engage in aerial bombing highly immoral, Higgs argues. Yet for the U.S. policymakers who made the decision to attack, the future looks bright.

Rather than face its failures squarely, the White House shifted its war rationale to emphasize that the world now has one less dictator. Was this outcome a net gain for justice? Had Americans known the consequences of invading Iraq, would enough of them have voluntarily paid a pro rata contribution of, say, $2,000, to cover all of the costs to the country? No, Higgs argues, that would have been an offer they likely would have refused.

Robert Higgs is a Senior Fellow at The Independent Institute and Editor of the Institute’s quarterly journal, The Independent Review. He received his Ph.D. in economics from Johns Hopkins University and has taught at the University of Washington, Lafayette College and Seattle University. He is the author of The Transformation of the American Economy 1865-1914, Competition and Coercion, and Crisis and Leviathan, recognized as one of the classic works on the growth and abuse of government power.

His articles have appeared in The Wall Street Journal, Los Angeles Times, Chicago Tribune, and San Francisco Chronicle. He has been a guest on NPR, NBC, ABC, C-SPAN, CBN, CNBC, and Radio Free Europe. He lectures at universities and conferences around the world.

Buy Resurgence of the Warfare State