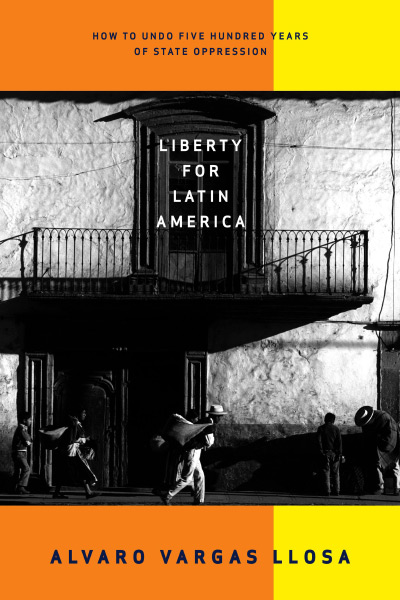 In Liberty for Latin America: How to Undo Five Hundred Years of State Oppressaion, Alvaro Vargas Llosa maintains that, despite conventional wisdom, no “free market” reform has taken place in Latin America over the last decades. According to Vargas Llosa, the latest and far-reaching attempt to foster an open society in the region has run up against what he calls the “five principles of oppression”: corporatism, State mercantilism, privilege, bottom-up wealth redistribution and political law. These same principles of political, social and economic organization have been present in Latin America since time immemorial. They have been sustained, over time, by both the Left and the Right. Unless they are removed once and for all, genuine progress will not be possible.

Seeking to give a comprehensive perspective, Liberty for Latin America accounts for various reform campaigns that have taken place in the region since it gained its independence, all of which, including the most recent one in the 1990s, failed. It also compares this latest attempt with reforms undertaken in other countries, from New Zealand to Central Europe, as well as with the types of institutions that helped develop the leading nations of today.

All of the conclusions are then integrated into a final proposal for real, meaningful reform. Vargas Llosa’s proposal postulates the liberation of the individual from the coercion that has limited choice, opportunity, wealth creation and access to property in Latin America. This reform is also an attack on the deep skepticism and, at times, nihilism into which repeated failure has thrown large segments of society—the type of environment in which moral character, and therefore civil society, can hardly develop.

What Failed in Latin America

Liberty for Latin America is divided into ten chapters, following an introduction that explains how institutions and culture interact in order to bring about—or stifle—the free society. Chapter 1 looks at how five basic “principles of oppression” have shaped life in these countries from pre-Columbian to republican times.

Chapter 2 concentrates on the 20th century, up to the end of the 1980s, a period dominated by economic nationalism that ended with the collapse of the state’s legitimacy. As a result, most of the population had to operate outside of the law, and various authoritarian movements were able to rally support against the status quo and the political elites. The long descent into economic and social devastation is precisely what opened the way for reform in the final years of the century.

Chapter 3 traces the origin of development in the world’s leading nations, comparing the types of institutions that made free-market capitalism possible with Latin America’s “principles of oppression” (many of the developed nations have themselves moved away from the some of the institutions of liberty, of course).

Chapter 4 delves into the tortuous relationship between the U.S. and Latin America, assessing how various types of policies (including foreign aid, double standards as regards trade, Cold War tactics, etc.), have tended to reinforce, rather than attenuate, the causes of Latin America’s underdevelopment. Vargas Llosa closely examines the war on drugs and its counterproductive effect on the whole of the Andean region.

Chapter 5 sets the stage for the following chapters, which deal with the end-of-century reforms. This particular chapter analyzes how and why previous attempts at reform failed in the region, both in the 19th and the 20th centuries. To a large extent, the same reasons that account for previous failure explain the recent failure, Vargas Llosa shows.

Chapters 6 and 7 tackle the whole reform process of the 1990s, including the fight against inflation, privatization, trade liberalization, foreign investment, and other areas. A detailed description of what took place in various countries is followed by a critique seeking to demonstrate that in no area did reform actually eliminate or substantially reduce the power of the state over the economy and social life. The moderate successes are acknowledged, but the failure to take away the monopoly of opportunity from interest groups linked to the political machinery is spelled out with a view to helping the reader understand why there has been no reduction in poverty and why frustration with “free markets” is now so pervasive in a region where reform has come to a complete stop. The conclusion is that the “principles of oppression” shaped the reform process itself, paradoxically entrenching some of the elements reform was supposed to do away with.

Chapter 8 explores corruption, both in its most blatant manifestations and in its subtle, extremely harmful social effects, which account for the absence of a cogent, morally strong, civil society. The laudable and laborious efforts by grassroots organizations and civic associations that help sustain life throughout the region are examined in the context of the pernicious effect of statism, which is responsible for the emergence of an entire underclass of marginal people devoid of any sense of social belonging and for turning social cooperation into a naked struggle for dwindling handouts at all levels.

Chapter 9 sets the stage for the final chapter, which contains the proposal for real reform. Here, the book rescues the “individualist” tradition of Latin America, valuing the manifold instances in which individual creativity, social cooperation and exchange, and resistance against political oppression have taken place throughout the centuries. This section demonstrates that real reform must rest on, and draw inspiration from, a deep-seated, ancient and therefore “legitimate” tradition, and that there is nothing alien about liberty across the region.

The final chapter of Liberty for Latin America proposes a direct attack on corporatism, State mercantilism, privilege, wealth transfer and political law through a transformation of the entire political and decision-making system based on the devolution of responsibility to the individual in all spheres of life. The type of reform proposed here has never before been undertaken in Latin America and yet it points to the satisfaction of most of the objectives that previous attempts set out to achieve. Since many individuals depend on the current system for survival, a careful transition is envisioned, including a gradual phasing out of some of the commitments of today’s governments. Underlying the entire blueprint for reform is the idea of empowering people at the grassroots level so that the various types of social institutions that are currently hindered from developing and blossoming can restore the moral fiber which society has lost and without which any sort of development is impossible.

Alvaro Vargas Llosa is one of Latin America’s foremost political journalists. A native of Peru, he graduated from the London School of Economics and has worked as a journalist in Latin America, Europe and the U.S. for over fifteen years. He is now a Senior Fellow at The Independent Institute.

He has authored twelve books, which have been published in Spanish, English, Portuguese, and Italian. He is also co-author of Guide to the Perfect Latin American Idiot, a bestseller in Latin America, Spain and the United States.