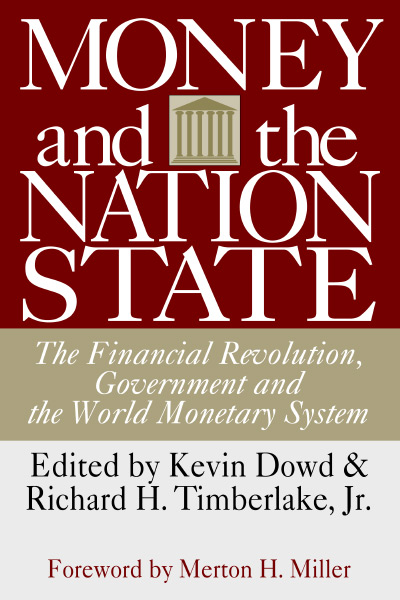 Merton Miller writes in his foreword to Money and the Nation State that this book “provides the essential framework for those willing to return to first principles in thinking about the role of monetary arrangements in economic life.”

This volume, edited by noted financial economists Kevin Dowd and Richard Timberlake, gathers the work of seventeen top scholars on all-important aspects of monetary theory and history. As the editors note in their introduction, a growing list of observers now acknowledges that the world’s financial problems are systemic.

History of the International Monetary System

David Glasner opens by arguing that economists have not seriously challenged government’s monopoly on money, which has produced a history of “debasement, depreciation, and devaluation.” That might be understandable if money were a “natural monopoly,” but Glasner notes that money has none of the features of one. Thus a better, more political explanation for government monetary sovereignty must be the case.

Frank van Dun’s chapter then follows by putting the logic of sovereignty under the microscope. Beginning with ancient rulers’ assumption of the power to coin money, he traces how the theory of state sovereignty has, over time, expanded to justify all state activities, based on the doctrines of “implied powers” and “public interest.”

Leland Yeager opens with a brief description of the early metallic standards, noting that, until the Civil War, the United States had issued no paper money. He then moves to an examination of the gold standard and its place in bringing about an unprecedented rise in wealth, up until the intrusions of government regulation and monetary devaluation, beginning in the 1920s and continuing through the post-World War II system of fixed exchange rates known as Bretton Woods.

The late Murray Rothbard discusses in depth Britain’s decision to restore the pound sterling to its pre-World War I par, despite its inflationary war policies, and the role the U.S. Federal Reserve played in this fateful decision. Rothbard looks closely at New York Federal Reserve Bank Governor Benjamin Strong, who presided over an inflationary policy designed to help Britain. Rothbard relates this story in fascinating detail, revealing the real human drama of inflationary politics.

Thomas Cargill opens Section II of the book with an examination of U.S. financial policy since the fall of the Bretton Woods regime, which gave way to an era of incomplete and inequitable deregulation which, along with bad tax policy, helped produce the savings and loan crisis. This shameful response to the insolvency of the industry—including an increase in federal deposit insurance—only made matters far worse.

Genie Short and Kenneth Robinson focus on the key issue of deposit insurance, tracing the history of deposit guarantees, and arguing that government guarantees have forced the financial sector to price risk incorrectly and make depositors complacent. The authors call for a reassessment of what constitutes an actual financial crisis in order to remove “a true stumbling block to financial reform,” which would include an end to reliance on government for deposit guarantees.

Alan Reynolds examines this “moral hazard” problem in the International Monetary Fund, reporting that he can find no example of IMF intervention “unambiguously improving an economy’s performance over a sustained period.” Instead, he notes, the IMF typically requires borrowing nations to engage in “destructive devaluation and suffocating taxation,” destroying economic growth.

Robert Keleher follows up by looking at global economic integration. He attributes the new economic environment to financial deregulation and the telecommunications and information processing revolution. According to Keleher, the choice facing the new world market is, once again, between centralized and decentralized decision-making, with decentralization clearly superior.

Foundations for Monetary and Banking Reform

Kevin Dowd addresses the irony of witnessing collapsing central planning in central and eastern Europe alongside the formation of the European Community super-state. He concludes that the attempt to create a European Federal Reserve System is “a classic case study of the fatal conceit of would-be central planners who have the supreme arrogance to think they can impose their ‘will’ on peoples and markets alike...”

The book concludes with Steve Hanke and Kurt Schuler’s discussion of currency boards—institutions that issue notes and coins convertible into a foreign currency or commodity at a fixed exchange rate. The authors point to these boards’ excellent records in creating public confidence, even during domestic instability, and argue that currency boards depoliticize the money supply.

Offering practical, proven and economically sound directions for reform, Money and the Nation State is undoubtedly the most comprehensive analysis and critique of international monetary, banking and financial issues available today. The result, as Merton Miller states, is a significant contribution to the “careful reconsideration of today’s failed monetary orthodoxies [that] is clearly overdue.”

Buy Money and the Nation State