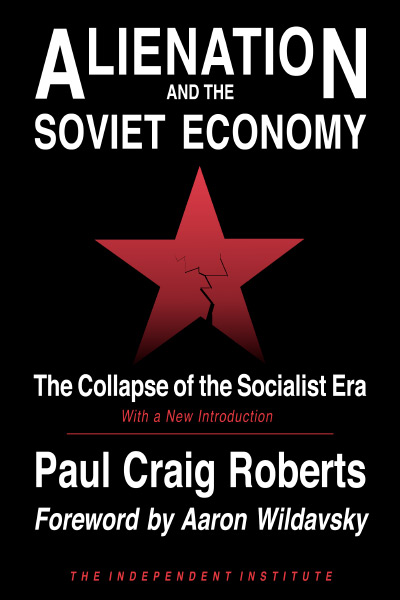 We live in momentous times. As the Soviet empire collapses before our eyes, perhaps still more stunning is the spectacle of formerly Marxist nations jettisoning central planning and embracing the market. It leaves many Western academics, who sympathized with the Marxist creed or apologized for socialist experiments, looking ridiculous.

One scholar, however, stands out as a notable exception. He is Paul Craig Roberts, a Research Fellow at The Independent Institute who today holds is Chairman of the Institute for Political Economy. When his major work, Alienation and the Soviet Economy, first appeared in 1971 it was virtually ignored or dismissed by most professional Sovietologists. Yet the cascade of current events has fully vindicated all its most controversial conclusions about Marxist theory and the Soviet economy.

The Independent Institute is therefore delighted to make this seminal book accessible again to the general public. This new edition of Alienation and the Soviet Economy also features a foreword by Aaron Wildavsky, the late Professor of Political Science of the University of California at Berkeley. In addition to this English edition, a Russian translation has been published in Moscow.

Marxism Versus the Market

Very few books range from high theory to mundane practice as competently as Alienation and the Soviet Economy. This intellectual versatility allows Roberts to demonstrate how economic reality had forced Soviet leaders to permanently retreat from pure Marxism prior even to World War II.

For Karl Marx, the fundamental “evil” that socialism would eradicate was neither capitalism nor private property but commodity exchange itself. Marx felt that trading on the market, in and of itself, “alienated” workers from their labor. “The separation between producer and user bridged only by the ‘cash nexus’,” Roberts writes, “is the source of all the specific economic ills . . . attributed by Marx to capitalism.“Marx looked forward to the abolition of all monetary exchange, indeed all markets—-in consumption as well as production—and their replacement with a central plan that would turn the entire economy into one big, happy household.

Lenin and the Bolsheviks tried to impose this theoretical blueprint on Russia after seizing power in 1917. In one drastic leap into socialism, they outlawed all trade, all hiring of labor, all leasing of land, all private enterprise—in short, literally all voluntary exchange. The results were catastrophic. Production plummeted as Russia faced starvation, destruction, and death.

By 1921, Lenin found himself compelled to initiate what he called the New Economic Policy (NEP): a complete reversion to market exchange. The years before the NEP have gone down in history as War Communism. As the label implies, historians have tried to pawn off the excesses of this early period as mere expedients, forced upon the Bolsheviks by the cruel necessities of waging a grueling civil war against so many counter-revolutionary foes.

Alienation and the Soviet Economy, however, irrefragably demonstrates that Lenin and the other Bolsheviks looked upon War Communism not as some temporary expedient, but as a deliberate and calculated effort to put Marxist ideals into immediate practice. They realized that the NEP represented a serious ideological retreat. Roberts quotes Lenin as openly conceding that “the direct transition to purely socialist forms, to purely socialist distribution, was beyond our available strength.” In other words, Ludwig von Mises’s classic argument that socialism was an economic impossibility had already received dramatic empirical substantiation by 1921.

Not until 1927 had Russian economic recovery gone on long enough for Stalin to dare another leap into socialism. Under the first Five-Year Plan, land and industry were brutally collectivized. Thus, as Kenneth Boulding has pointed out, Roberts’s scholarly contributions show that “Marx leads much more directly to Stalin and the Gulag Archipelago than the more tender-minded Marxists have believed.” Nonetheless, despite Stalin’ s monstrous crimes, he was far too shrewd to contemplate another abolition of money. Unlike Lenin under War Communism, Stalin permitted the use of the ruble not only for accounting but for wages and other actual payments.

In fact, throughout the entire history of all socialist regimes, we can perhaps identify as many as three genuine efforts to adhere strictly to Marx and abolish the market totally: War Communism in Russia, Cuba under Castro during the 1960s, and Cambodia under Pol Pot and the Khmer Rouge. Each of these efforts, of course, was an utter disaster. Castro converted Cuba from a Latin American nation with one of the highest per capita incomes to one of the lowest, and little more needs to be said about the horrors of Cambodia’s Killing Fields.

The Mirage of Central Planning

If these meager three failures represent the only instances of true Marxism, what kind of socialism has held the Soviet empire and China in its grip for all these years? Here again, Alienation and the Soviet Economy is breathtakingly provocative. Roberts contends that none of these economies practice central planning at all. They merely offer an illusion of planning. As Michael Polanyi suggested in 1940, the Soviet Union really has a “disguised market economy.”

Soviet planners simply ask factory managers and other heads of enterprises what they intend to do, and then order them to do it. “The published plans,” writes Roberts, “appear to be almost entirely derived from what amounts to asking each enterprise its ex ante production plans and negotiating over percentage increases. The individual plans of each enterprise are then handed back to them with instructions to perform them.”

Alienation and the Soviet Economy shows that the unacknowledged abandonment of central planning has applied not just to socialist practice but to socialist theory as well. Oskar Lange, in his famous reply to Mises, supposedly showed how central planners could engage in rational economic calculation. Others have cast suspicion on whether Lange’s so-called market socialism really solves the calculation problem. Roberts however observes that Lange’s solution, regardless of its feasibility, has nothing to do with central planning. Lange’s “planners” are dutiful slaves to resource data and market-based equilibrium equations; they give no more conscious direction to the economy than it already has without them.

Even though what Wildavsky calls “the ersatz imitation of capitalism” prevailed until recently throughout the Communist world, the imitation was not the real thing. It imposed enormous economic costs. Socialist nations may have to rely upon markets to allocate resources, but upon markets that are hampered, sabotaged, distorted, and subverted. The planners’ efforts to maintain a mirage of central control creates perverse incentives that misallocate resources on a vast scale.

Roberts concludes that the best way to view the Soviet economy is “as a polycentric system with signals that are irrational from the standpoint of economic efficiency.” Alienation and the Soviet Economy thereby confirms that Mises and Friedrich Hayek were more right than they realized in the socialist calculation debate. Central planning is impossible—literally. As Wildavsky recommends in his foreword, “This is the best book to read on communist political economy for those who think they already know it all.”

Paul Craig Roberts is Chairman of the Institute for Political Economy and a nationally syndicated columnist.

Buy Alienation and the Soviet Economy