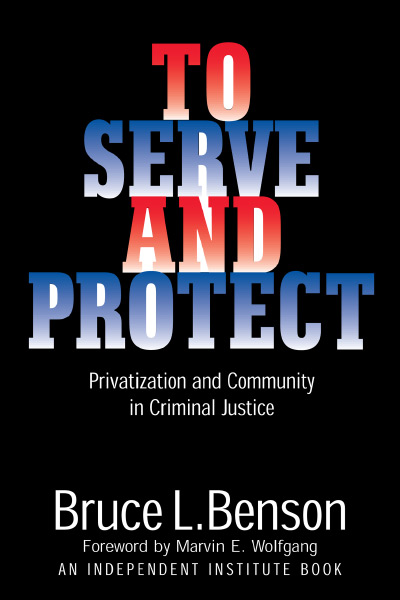 “Police have very little to do with crime when it comes down to it,” explains Tallahassee, Florida, Police Chief Tom Coe. “The community cannot put enough cops out there to protect everyone. You’ve got to empower the people to protect themselves.”

Responding to that call, To Serve and Protect suggests policy changes to mobilize citizens and lead to effective and efficient justice for crime victims. Taking an historical perspective, the book both documents the failures of the criminal justice system and shows how they can be corrected.

Ironically, despite its unparalleled importance as a policy issue, the public isn’t often treated to an in-depth analysis of the issues of crime and criminal justice. Instead, pundits and policy-makers have grown accustomed to giving pat answers and canned excuses, with those on the left stressing gun control measures and government rehabilitation programs as solutions, while those on the right advocate building more prisons, mandating more punishments and getting “tougher” on drugs.

In this new book from The Independent Institute, Benson shows how both ends of the political spectrum get the issue wrong and neglect perhaps the core of the debate: the crucial role the private sector and local community institutions have played and must continue to play in controlling crime.

In questioning the role of government in criminal justice, Benson leaves no stone unturned as he explores the gamut of private-sector criminal justice solutions: from outsourcing of government functions such as prisons and corrections, security, and arbitration to full-scale “private justice” initiatives, such as business and community-imposed sanctions, citizen crime prevention, and increased private security and self-defense.

Privatizing and outsourcing more criminal justice programs and lifting licensing and regulatory restrictions that discourage more private firms from entering the industry will not only seriously cut costs associated with the criminal justice system, but will offer greater accountability and serve to control unfortunate abuses of police power.

Searching for the most cost-effective methods of both reducing crime and protecting civil liberties, Benson weighs the benefits and liabilities of various levels of privatization and offers a comprehensive system to end the current gridlock. The result is a plan that not only makes criminal justice truly accountable to the citizenry, but also simultaneously fights the dangers inherent in the unchecked power of government.

No Justice, No Peace

In studying successful criminal justice systems, Benson also shows that an effective system should have victim restitution, rather than criminal punishment, as its primary focus. Victims advocacy groups should be made more aware of policy changes that would help realize this goal, including privatized collections, allowing private arbitrators to deal with criminal cases by determining restitution awards, and expanding the market for prison labor to not only cover operating expenses, but to increase restitution awards.

For instance, prior to prosecution, most Japanese criminals bargain with their victim through a mediator, and offer to pay restitution so that the victim will not demand further punishment. Few offenders receive government imposed penalties on top of their restitution, yet criminal offenses are substantially lower than in any other industrialized country, and Japan remains the only country whose crime rates have fallen continuously since World War II.

A History of Vigilance

America has a long history of private actions to restore order when local governments have been to inept or corrupt to control crime. Modern versions of such “vigilance” include the Fairlawn Coalition or “Orange Hats” of the Anacostia section of Washington, D.C. and “Mantua Against Drugs” in Philadelphia, community organizations that take proactive approaches to cleaning crime out of their neighborhoods. Other examples range from crime watches to community or building patrols to privatization of formerly public streets in order to limit access to fully-privatized gated communities.

Benson explores the wide array of private activities that have developed to protect individuals and their property are explored, including everything from participatory neighborhood actions, to individual investments in tools of protection, to the market for private police and security equipment. Both historical and current examples of private justice in America are explored in order to demonstrate that private justice is a traditional American response to government failure.

To Serve and Protect makes clear the choice policy-makers face is not whether or not to “allow” privatization. It is between encouraging and supporting the privatization trend, or attempting to thwart it, thereby perhaps slowing its evolution and diverting its path, but without stopping it. Some cost-effective developments (e.g., private markets for criminal labor, formal private courts) can certainly be prevented, but as history conclusively shows, since governments cannot adequately protect citizens, the public will and should take justice into its own hands.

Buy To Serve and Protect