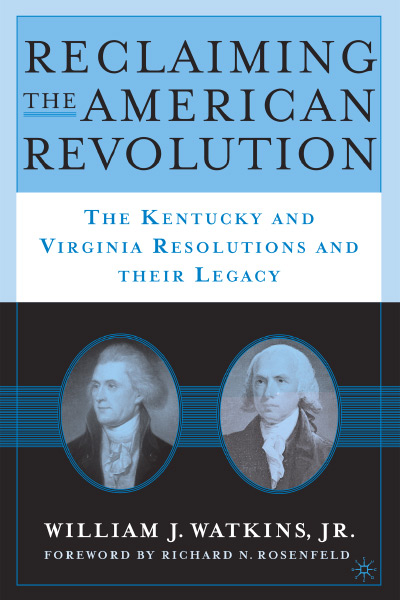 • The Kentucky and Virginia Resolutions of 1798 are among the most important documents in American history. Thomas Jefferson and James Madison wrote the Resolutions in response to the Alien and Sedition Acts, under which the federal government violated the First Amendment and exercised powers beyond those authorized by the U.S. Constitution (Article 1, Section 8). The relevance of the Resolutions continued through U.S. history to today's USA PATRIOT Act.

• The Alien and Sedition Acts were among the worst restrictions on liberty in U.S. history. The Sedition Act criminalized false or scandalous statements about the government, Congress or the President. The Secretary of State monitored all newspapers throughout the country and sent dispatches to city federal prosecutors to take action for the printing of any "seditious" material. Prosecutions were brought against newspapers in the country's largest cities-Philadelphia, Boston, Baltimore, New York, and Richmond, and the Sedition Act cast a chill on political dialogue.

• The Alien and Sedition Acts were controversial among voters. Congressman Matthew Lyon (Vermont) was indicted under the Sedition Act for criticizing the Adams administration and sentenced to four months in prison and fined $1000. Expressing their displeasure over the conviction, Lyon's constituents reelected him while he was in prison.

• Opponents of slavery used the principles of the Kentucky and Virginia Resolutions to nullify the Fugitive Slave Law. Some, such as abolitionist leader William Lloyd Garrison, even urged the North to secede rather than continue in a union with slaveholders.

• State statutes concerning the medicinal use of marijuana, which are in conflict with federal controlled substances legislation, will likely be the next battleground in the saga of state and federal relations. This, too, will show the importance Americans' understanding the doctrines of federalism and individual sovereignty articulated in the Resolutions.

• In 1798, James Madison pointed to war measures as leading to the loss of liberty at home. The same problem has resulted from the current "War on Terror." Under the PATRIOT Act, the federal government has more discretionary power than ever before to monitor the activities of ordinary Americans.

• Reminiscent of the Aliens Acts of 1798, the federal government threatens the rights of non-citizens. Even though the federal trial courts are available, secret military tribunals are slated to try suspected foreign terrorists. The federal rules of evidence will not apply to these proceedings and a death sentence may be handed down on a two-thirds vote.

• The attorney-client privilege is compromised under the PATRIOT Act. Federal correctional facilities may monitor these sensitive communications if they determine that such actions are reasonably necessary to deter future acts of terrorism. Under these circumstances, the accused and his attorney are hamstrung in putting up a defense to the government's charges.

• Though much has changed in the last 200 hundred years, federalism remains relevant for four reasons: (1) divergent local circumstances, (2) the need for experimentation and competition in policy-making, (3) the need to monitor those entrusted with power, and (4) the need to ensure that power is properly diffused.

The Kentucky and Virginia Resolutions, penned by Thomas Jefferson and James Madison, are a peerless study of First Principles, as constitutional lawyer William Watkins explains in Reclaiming the American Revolution: The Kentucky and Virginia Resolutions and their Legacy. Written more than two decades after the colonies declared independence from Great Britain, the Resolutions remain intrepid statements of self-government and limited central authority. Recognizing that power can only be checked by power, the Resolutions call for the states to interpose against unconstitutional acts of the national government.

A Check on Federal Power

The Resolutions were responses to the Alien and Sedition Acts. Passed in the summer of 1798, the Acts were the most illiberal legislation enacted during the early national period. Ostensibly aimed at securing the home front as the Federalist Party braced for war with France, the Acts served the broader purpose of consolidating political power for the Federalists. Through this legislation, the Federalists sought to restrain democratic-minded foreigners and to silence all criticism of the national government.

Early on, Jefferson and Madison saw the Acts as an attack on civil liberties and state sovereignty. During this “reign of witches,” the national government brought lawsuits for seditious libel against leading newspapers in Philadelphia, Boston, New York, and Richmond. To Republicans, these suits presented a great danger because the right to freely examine public characters and measures has often been deemed as the guardian of every other right.

During the Sedition Act controversy, Republicans adopted a modern libertarian theory of freedom of the press. Republicans such as St. George Tucker, the preeminent legal theorist of the era, postulated that an individual has the freedom to publish his sentiments without restraint, control, or fear of punishment for doing so. Until then, most Americans adhered to the rule of “no prior restraints.” Under this doctrine, the government could not prohibit an individual from publishing but could impose severe sanctions against the individual afterward. The threat of punishment after publication served as a great deterrent to free expression.

While the protection of individual rights such as free speech is key to understanding the Kentucky and Virginia Resolutions, federalism and sovereignty are also important. Federalism (the division of legislative sovereignty between the national and state governments) is a cardinal principle of the Constitution, while the question of who has sovereignty (the supreme power of the citizenry) was at the heart of the American Revolution. Colonists argued that sovereignty resided in each colonial legislature. The British, on the other hand, believed that sovereignty resided in Parliament and therefore Parliament could make laws binding on all subjects of the crown.

After achieving independence, the theory of sovereignty further developed and Americans rejected the idea that an artificial body such as a legislature could possess supreme power. Rather than each state legislature possessing supreme power, Americans believed that the people of each state were the sovereign authority and had delegated to their elected representatives certain powers. Thus, we often say that the people of the several states possess ultimate sovereignty and their representatives possess governmental or legislative sovereignty.

In passing the Alien and Sedition Acts, according to Republicans, Congress greatly exceeded its delegated powers and thus infringed upon the powers remaining with the state legislatures as governmental sovereigns or the people as ultimate sovereigns. This usurpation thus threatened the right to self-government because the people had delegated, for example, no power to Congress to legislate regarding speech. In fact, the First Amendment specifically prohibits Congress from legislating on that subject.

As for the remedy, Jefferson and Madison pointed to nullification and interposition, whereby they declared the Acts void and of no force. Although neither Kentucky nor Virginia actually nullified a federal law and both took pains to emphasize that the Resolutions were protests, the legacy of the Resolutions is much more than that. Fortunately, Kentucky and Virginia were not forced to take more drastic measures because Jefferson was elected to the presidency in the Revolution of 1800, and the hated Sedition Act expired at midnight just before he took office.

The Legacy of the Resolutions

In the early national period, the Principles of the Resolutions gained acceptance throughout the United States. During conflicts between state and national authority, reports and resolutions adopted by state legislatures, messages from state executives, opinions of state courts, and speeches of leading citizens all ring with the words of the Kentucky and Virginia Resolutions.

While the modern world is much different from that of the late 1700s, the march of years has in no way rendered federalism obsolete. If anything, the diversity that is modern America highlights the need for local self-governance and decentralized decision-making. The more diverse a society, the more it needs a pure federalist system. Only in a federalist system can a citizenry continue to work together toward great national objectives while we govern ourselves in the context of our myriad differences.

Unfortunately, our modern federal system is in disarray and functioning nothing like the system designed by the Framers. In the words of noted constitutional scholar Edward S. Corwin, “our system has lost its resiliency and what was once vaunted as a Constitution of Rights, both state and private, has been replaced by a Constitution of powers.”

If we are to reform our system of government, the first step must be the rediscovery of the American Revolutionary tradition and its lessons about self-government. Integral parts of this understanding are the Kentucky and Virginia Resolutions. The Resolutions articulate the basics of self- government in an eloquent, yet logical, manner; they are second only to the Constitution in the pantheon of American charters. Only if Americans embrace the Resolutions’ lessons about divided legislative sovereignty and ultimate sovereignty will a restoration of our written Constitution be possible.