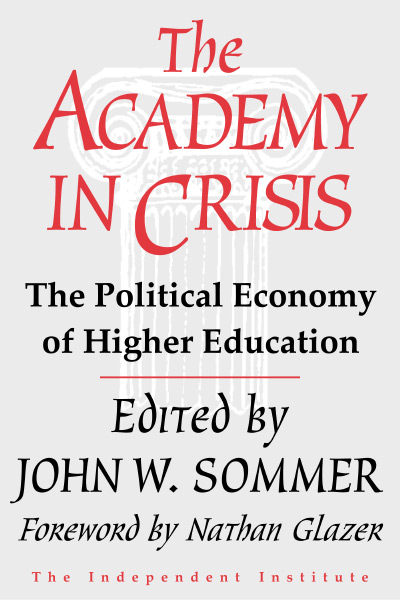 The inferior education that America’s college students are receiving makes regular headlines. Yet when one thinks of government schools, primary and secondary education are what immediately come to mind. The State’s dominance over these levels of schooling has occasioned the most intense criticism and the most fertile search for market-oriented alternatives. We sometimes overlook the government's equally immense involvement in higher education.

The Long History of State Tutelage

Government tutelage over higher learning is not a recent development. As Roger Meiners (University of Texas at Arlington) points out in the first chapter of The Academy in Crisis, “beginning with Harvard College, nominally founded in 1636, for decades all new colleges were quasi public.” Meiners’s historical survey of American higher education goes on to observe that State support “continued after the founding of the republic.”

An even smaller percentage of the population attended colleges and universities at that time than today, which led to suspicions about who ultimately gained from these subventions. Meiners reports, for instance, that Kentucky’s governor in 1825 denounced public support of Transylvania College because “the state has lavished her money for the benefit of the rich, to the exclusion of the poor; the only result is to add to the aristocracy of the wealthy the advantage of superior knowledge.”

The federal government also got into the act early. In 1785, Congress set aside territorial lands for the maintenance of public primary and secondary schools in new states, and “mandated that two townships be reserved in Ohio for the support of a university. Townships in Indiana, Illinois, and Michigan were [also] set aside to be sold to support a seminary.”

Thus during the Civil War, when the Union established the land-grant agriculture colleges through the Morrill Act of 1862, it was merely carrying on and expanding upon a well-established policy. By World War I the federal government was awarding research contracts to universities. And since the end of World War II, support from all levels of government has hovered between 45 and 50 percent of higher education's total revenues.

The book’s second chapter, by Joel Spring (State University of New York, New Paltz), explores further the political and economic ramifications of this massive support. Spring’s major finding is that from the time of the Morrill Act, the federal government has manipulated higher education to serve both what it believes to be the labor market's economic needs and whatever political objectives happen to be currently fashionable. The resulting political conflict has bred turmoil and chaos within an educational community obsequiously scrambling after the State's largess.

Today the largest category of federal financial support to higher education is student aid, amounting to $10.3 billion or 47.4 percent of total Federal expenditures for colleges and universities even as far back as in fiscal year 1985. Moreover, this figure only captures the overhead costs of guaranteed loans, and not the overall volume of such loans. C. Ronald Kimberling, a former Assistant Secretary for Postsecondary Education in the U.S. Department of Education, contributes to The Academy in Crisis a detailed analysis and critique of this program.

Kimberling reveals that the Reagan Administration, despite anti-Department of Education rhetoric, made no cuts in student aid. Appropriations under the Higher Education Act increased from $6.34 billion in fiscal year 1981 to $8.2 in fiscal year 1987. Even after adjusting for inflation, the numbers still rose.

Indeed, the popular perception that student aid has fallen is the result of Congress’s pusillanimous refusal to go along with a Reagan Administration reform that would have concentrated Pell grant awards among low-income students. Because Congress actually enacted the reverse, enhancing the eligibility of middle and upper-income students, the size of individual grants was diluted. With college costs rising faster than total grants, and with Congress making ever more students eligible, the average grant size, to poor and wealthy alike, shrunk.

Rounding off the book’s opening section is a chapter by Anthony Flew (University of Reading). Rather than focusing upon the external politicization of the academy through the State’s pervasive influence, Flew exposes internal politicization. He sees the eclipse of the traditional liberal and humane curriculum, the increasing political radicalization of the faculty, the decline of academic standards, the philosophical denial of objective truth, and the faddish incorporation of special interest courses and topics as all part of the same general syndrome of internal corruption. Flew thinks that educational reform ultimately requires moral reform from within colleges and universities themselves.

Edwin G. West (Carleton University) thoroughly dissects all justifications for government support of higher education. These justifications usually rest upon cost-benefit calculations. But with empirical data from Canada, where West teaches, he shows that studies often understate the costs of public support significantly.

West is at his best demolishing the alleged external benefits from higher education. These benefits supposedly spill over into the economy without profiting the students who receive the education. Total student enrollment will consequently be below what is supposedly optimal unless stimulated with tax subsidies. But as West writes, “even if positive marginal external benefits from higher education were demonstrated by collected evidence, it is not obvious that government intervention is very capable of capturing them. Government failure seems at least as strong as market failure.... One may entertain doubts whether external benefits are relevant at the margin.... Most college students in the U.S. would go to college even without subsidies and they would receive better educations.”

After careful scrutiny, West concludes that the real beneficiaries of the State’s subsidization of higher education are middle and upper-income students, and the educational establishment itself. He demonstrates through public-choice economics that it is the political rent seeking of these groups, who successfully exploit the rest of society, including the poor, that best explains the State's ongoing academic enthusiasm.

The externalities argument also surface in the chapter on academic research by Stephen Dresch (Michigan Technological University). The most popular explanation for State funding of this research is instrumental; fundamental research purportedly leads to technological innovations that in turn lead to economic growth. Dresch finds this justification hopelessly vague and confused. “The inadequacy of the prevailing economics of fundamental research is the failure to identify what it is that research contributes to society.” The defenders of State funding are at last resort reduced to defending fundamental research as an end in itself. But by turning academic research into another artistic form of consumption, they knock out all utilitarian props for State funding.

Roger Meiners, along with Robert J. Staaf (Clemson University), contribute the final chapter in the book’s second section. It is a stimulating and innovative property rights analysis of institutions of higher learning. Why do professors devote more energy to writing and research than teaching? And did you ever wonder what explains the labyrinth of academic politics? Rather than just denounce these and other modern symptoms of academic decay, Meiners and Staaf show how they are the predictable outcome of the perverse incentive structures in non-profit, non-proprietary colleges and universities.

Universities and colleges are more than just educational institutions. Government intervention has turned them into sources of scientific and technological innovation. Indeed, as Sommer points out in his introduction for The Academy in Crisis, over the past half century, “universities have replaced industry as the chief place of conduct of this research.” Meanwhile, federal and state governments became the chief provider of resources for this research.

As Joseph Martino (University of Dayton Research Institute) puts it in his chapter, “since World War II, it has been taken for granted that science and technology deserve public support.” An enormously influential book first published in 1945, Science, the Endless Frontier by Vannevar Bush has been the primary source of this automatic presupposition. But the four chapters that constitute the book's final section raise some serious questions about this presuposition's tenability.

Peter H. Aranson (Emory University) demonstrates that the same public choice dynamics so devastating for other forms of government intervention are at work with respect to science and technology. The only technological intervention with any potential social benefits is patents. Martino’s chapter, after exhaustively combing through all the empirical research on the economic benefits of research and innovation, discovers that the State still runs headlong into insurmountable information problems. There is no way it can rationally determine how much science and technology should be subsidized or where those subsidies should be directed.

Cotton M. Lindsay (Clemson University) takes on the glib assertion of the National Science Board that the numbers of mathematicians, engineers, and scientists may fall below national needs without public support for their education. He finds the argument riddled with economic fallacies and slipshod reasoning.

Allan Bloom’s The Closing of the American Mind made the trashing of American higher education a growth sector in the intellectual marketplace. But The Academy in Crisis shows that the problem runs deeper than nostalgia for the good old days. It is the State that determines the contours of higher learning in this country. Reform of our colleges and universities will never be successful until it finally does battle with the entrenched, bureaucratic, government-university complex.

John W. Sommer is Knight Distinguished Professor Emeritus at the University of North Carolina at Charlotte.

Buy The Academy in Crisis