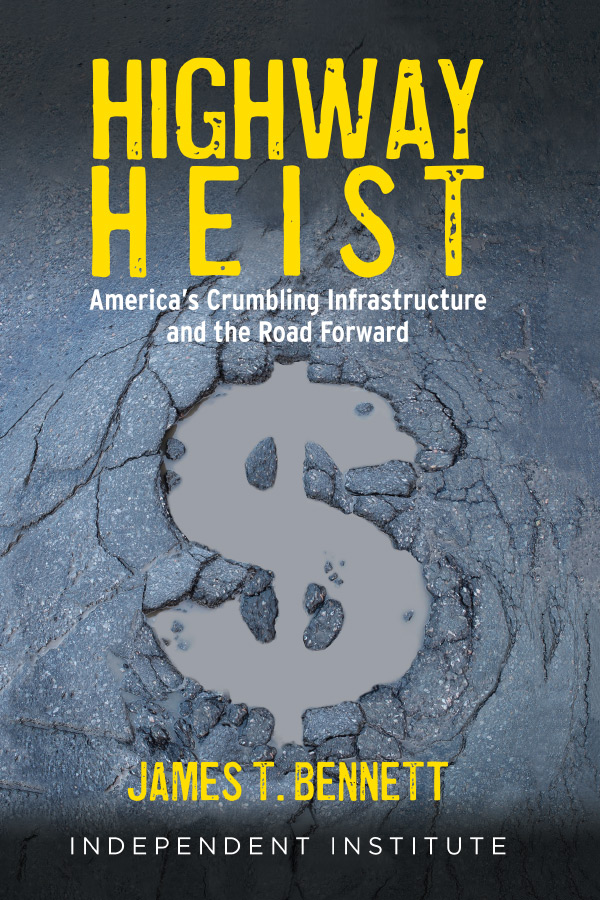 Infrastructure is a hot topic for all political parties. The right thinks the government is inefficient in its building of roads, producing, as a result, a crumbling mess of highways and byways. The left has expanded the term “infrastructure” to apply to things the Founders likely didn’t want it to entail. These differing views raise questions. What is infrastructure? If it’s so vital, why are America’s roads a mess? Or are they? Written by one of America’s foremost experts on the topic, James Bennett, Highway Heist answers these questions and more. Research Fellow at the Independent Institute, Dr. Bennett holds the William P. Snavely Chair of Political Economy and Public Policy in the Department of Economics at George Mason University. With an historian’s eye for detail, and an economist’s calculator for supply and demand, Bennett lays out what America’s infrastructure has looked like from the time when mere horse-drawn carriages and canals connected Americans to what we see now: an expansive, intricate lacework of highways crisscrossing America. While the Founding Fathers could see infrastructure’s importance, they could not decide how to establish it—and most importantly, who should pay for it. The “internal improvement” issue caused controversy among them and was the catalyst for many a robust argument. Both yesterday and today. Millions of Americans travel billions of miles per year on every surface—from California’s state route 1 to Washington D.C.’s “Capital Beltway.” In this book, Bennett explains how America’s infrastructure has gone from an idea, to superhighways, to a crumbling mess, and, perhaps, to not as bad as we think. Bennett also suggests nongovernmental solutions to the infrastructure problems in America that in fact could use improvement.

Are Roadways Even in the Constitution?

Bennett begins by exploring the most contentious, and consequential, transportation issues of the early nineteenth century. Politicians mention infrastructure so often now, it’s hard to imagine a time when it didn’t even exist. Bennett paints a vivid picture of that time—and demonstrates that, but for a few influential persons, government provision of roads would never have come to pass. Thomas Jefferson, states’ rights champion, paradoxically supported a major expansion of government’s role in facilitating the movement of goods and people. So did President John Quincy Adams, who advocated for the construction of large public works with the assistance of the federal government. Andrew Jackson strongly disagreed, but his side lost the public debate. And so was set the stage for the most sophisticated, massive, interconnected highway system ever in history. But controversy accompanied this growth, and, although the dollar signs and specifics have changed with the times, the echoes of those debates can be heard today on the floors of Congress.

Once America’s leaders had decided roads, though of questionable constitutionality, were vital to the economy, hurdles nevertheless remained—like who should pay for them and who should build them. Chapter two reviews the “Good Roads” movement, which starts as “the project of bicycle enthusiasts around the upper-crust League of American Wheelmen” but quickly enough expands—just as government programs, as Bennett cogently reminds us, always expand—to include a coalition of progressives, engineers, and business leaders whose primary obstacle was the persuading of truculent farmers to cede local control of road maintenance and to more remote centers of power, up to and including the new state departments of transportation. This chapter also surveys early efforts by the states and the federal government to extract taxes and fees from automobilists, as well as the formative experiences of such later architects of U.S. highway policy as Dwight D. Eisenhower and Thomas H. MacDonald of the Bureau of Public Roads. A central theme throughout? Centralization. Lots of it.

In chapter three, Bennett outlines the genesis, development, and eventual enactment of the National System of Interstate and Defense Highways, something he calls the “grandest public works project in the history of the nation, if not the world.” In April 1941, President Roosevelt appointed a seven-man Interregional Highway Committee to plan a postwar national road network. The committee recommended the creation of a national web of interregional highways that would total thirty-nine thousand miles. Though the Second World War halted most highway construction, slowly but surely incredible thoroughfares were built: the 160-mile

Not surprisingly, the building of a complex, intertwined interstate infrastructure proved immensely expensive. Streets and highways accounted, for instance, for one-third of the Public Works Administration (PWA) projects, costing a cool $1.3 billion. And once built, the massive system of roads required—and requires still—an immense amount of care, which meant, and still means, an outlay of even more funds. In addition to budget-conscious conservatives, social critics, from the left and the right, also prophetically cautioned against the massive destruction and displacement that construction of the interstate would likely entail.

In chapter four, Bennett pulls back the veil on the reality of such a massive building endeavor. The tumultuous 1960s and 1970s witnessed an about-face in public attitudes toward the interstate and the road-building projects. The shift from localities and small-scale entities to centralized bureaucracies as the decision-makers in the construction of the US highway system had indeed allowed the extraordinary achievement of a gigantic and marvelously engineered set of roads. But it also had led to the razing of hundreds of thousands of homes and businesses and the displacement or uprooting of over one million Americans, in many cases by the government exercise of eminent domain. Whole sections of America never recovered from this kind of legalized theft, done, of course, in the name of progress.

Roadways also contributed to the “suburbanization” of America, welcomed by some, criticized by many, but which led, regardless, to the decline of businesses adjacent to the local byways and roads that had defined an older America. The Wall Street Journal editorialized that the interstate was “a vast program thrown together, imperfectly conceived and grossly mismanaged, and in due course becoming a veritable playground for extravagance, waste, and corruption.”

In the final chapter, Bennett wrangles with the protean term “infrastructure”—including the endless cry to fix our public highways and bridges now that they are “crumbling.” And, without question, our politicians’ promoting the idea that America’s roadways are in ruins has contributed over the decades to hefty increases in federal spending. Bennett blames Republicans as much as Democrats for the overspending on infrastructure, saying “when spending for roads and bridges is on the table distinctions tend to melt.” Both sides, for instance, found convenient the 1998 Infrastructure Report Card by the American Society of Civil Engineers (ASCE) when it claimed that roads, bridges, tollways, and canals were falling apart and in need of even more federal funds to fix them. Yet, Bennett says, this is a tragedy because “indisputably, incontrovertibly, our highways and roads and bridges are in better shape today than at the dawn of the Reagan Administration.”

The other problem with the term “infrastructure”? Thanks to the progressive left, the term can now mean almost anything, including a mind-numbing number of programs that used to be grouped under the social safety net or numbered among the numerous aspirations to social justice of contemporary America. So far, however, the Democrats and fellow-travelling Republicans, have yet to make this grotesque definition of the term stick. (Witness the Biden Administrations recent embarrassing failure to pass the “Build Back Better” legislation.)

So what is to be done? First, according to Bennett, we need to get back to the older notion of infrastructure—mainly roads and bridges. We owe our public discourse at least that much if we have any hope of progress. Second, while Bennett observes that there have been significant problems with modern policies in how they’ve handled infrastructure—crumbling or not—he does not believe they are without remedy. Reform is necessary, even urgent, he says. And roads can in fact be maintained by public-private partnerships or PPP. But even here the involvement of the government still does what it always does—skews the allocation of resources away from the greatest need. Far better, Bennett concludes, to allow privatized electronic tolling to perform that function. There is great room for experiment here, and other countries have and are. The United States should follow suit—and then innovate.

In sum, Bennett guides readers through centuries of one of the most underrated yet widely used aspects of American life: roads. Relying on history and economic data, and with a humorous and oftentimes sharp tongue, Bennett explains how important America’s highways and byways have been to everything from policymaking to everyday life. Crafting these roads took persuasion, planning, and more taxes than any politician could have dreamed. And far too often their realization—made possible by recent flawed interpretations of the power of eminent domain—required destruction on a massive scale of long-established neighborhoods. Likewise, the upkeep of America’s highways has been the center of many a policy battle, waged by Republicans and Democrats alike. America’s roads, as all sides admit, must remain in good working condition for America’s economy to thrive and the well-being of Americans to continue. But just how and who will pay for it, continues to be the question of the day. Bennett concludes that the road forward just might be a second, but more serious, sustained look at, and local experimentation with, private roads and toll roads.