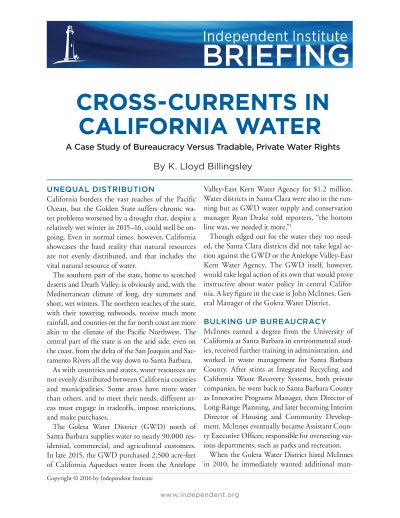 California borders the vast reaches of the Pacific Ocean, but the Golden State suffers chronic water problems worsened by a drought that, despite a relatively wet winter in 2015–16, could well be ongoing. Even in normal times, however, California showcases the hard reality that natural resources are not evenly distributed, and that includes the vital natural resource of water.

The southern part of the state, home to scorched deserts and Death Valley, is obviously arid, with the Mediterranean climate of long, dry summers and short, wet winters. The northern reaches of the state, with their towering redwoods, receive much more rainfall, and counties on the far north coast are more akin to the climate of the Pacific Northwest. The central part of the state is on the arid side, even on the coast, from the delta of the San Joaquin and Sacramento Rivers all the way down to Santa Barbara.

As with countries and states, water resources are not evenly distributed between California counties and municipalities. Some areas have more water than others, and to meet their needs, different areas must engage in tradeoffs, impose restrictions, and make purchases.

The Goleta Water District (GWD) north of Santa Barbara supplies water to nearly 90,000 residential, commercial, and agricultural customers. In late 2015, the GWD purchased 2,500 acre-feet of California Aqueduct water from the Antelope Valley and East Kern Water Agency for $1.2 million. Water districts in Santa Clara were also in the running but as GWD water supply and conservation manager Ryan Drake told reporters, “the bottom line was, we needed it more."

Though edged out for the water they too needed, the Santa Clara districts did not take legal action against the GWD or the Antelope Valley-East Kern Water Agency. The GWD itself, however, would take legal action of its own that would prove instructive about water policy in central California.

RELATED
The Pitfalls of Law Enforcement License Plate Readers in California and Safeguards to Protect the Public
Crime, Grime, and Greed at BART
Health Care Components of the $3.5 Trillion (Or, Is It $5.5 Trillion?) Spending Plan
COVID in California: How Government Regulations Created Critical Healthcare Shortages — Permanent Patient-Centered Reforms Needed
Bugs in the System: California Government Technology Failures and Recommended Solutions