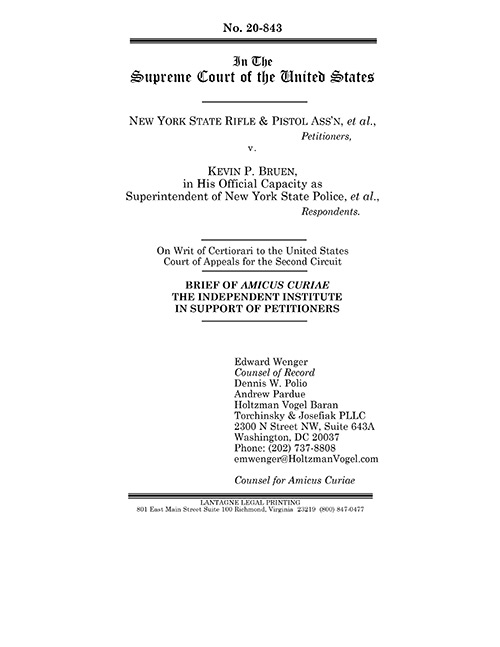 Does the Second Amendment let the government declare just any public area “gun free”? This is the question at issue in a case recently accepted by the U.S. Supreme Court.

The Independent Institute has filed an amicus curiae brief in support of the petitioners in the case, which could expand the right to carry a firearm outside one’s home. The petitioners argue that many restrictions on an individual’s right to carry are contrary to the explicit text and original meaning of the Second Amendment.

In its brief to the Supreme Court, the Independent Institute also argues that gun-free zones must be narrowly confined, stating “the Second Amendment does not leave room for the Government to eviscerate this right through the unbridled declaration of public gun-free zones.”

In April, the Supreme Court announced it would hear New York State Rifle & Pistol Association v. Bruen during its next term, which begins in October. The case could lead to expanding concealed-carry licenses in the few states that rarely grant that right to citizens.

“In NYSRPA v. Bruen, New York government officials will likely argue that they should arbitrarily decide whether a person has ‘proper cause’ for self-defense. The Supreme Court will likely consider text, history, and tradition—which points to a right of the citizenry, one guaranteed by the Bill of Rights,” said Stephen P. Halbrook, Senior Fellow at the Independent Institute and author of numerous landmark books on the history and legal aspects of the Second Amendment, including the very timely and authoritative, new book, The Right to Bear Arms: A Constitutional Right of the People or a Privilege of the Ruling Class?